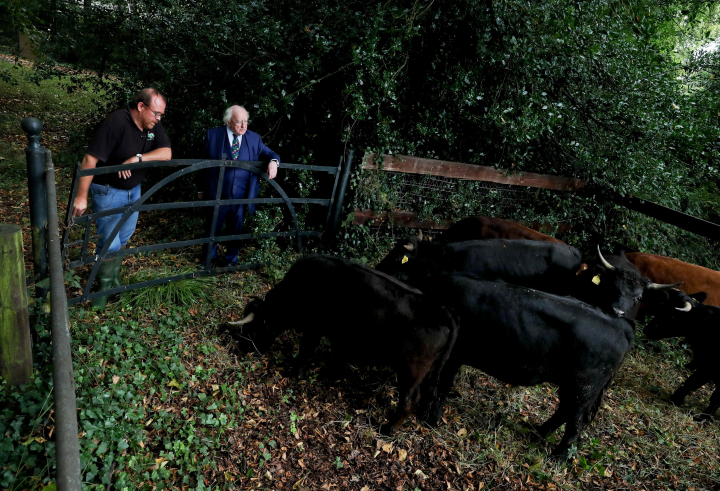 President Higgins welcomed 7 indigenous dexter cattle, for the beginning of their 3-month stay in the grounds of Áras an Uachtaráin.

The cattle are set to graze in the grounds of the Áras as part of a programme of work to enhance the biodiversity of the 130-acre site.

The arrangement arises from the recommendations in a recent biodiversity audit, commissioned for President Higgins by the Office of Public Works and undertaken by researchers from Trinity College. The audit recommended a sustainable growing regime for the Áras grounds, combining appropriate mowing to reduce the nutrient load in the soil, the introduction of grass-suppressing yellow rattle, and the presence of cattle to promote an improvement in the biodiversity of the meadows. These measures are aimed at allowing for the establishment of indigenous wildflowers, with corresponding increases in fauna dependant on such a diversity of flora.

The cattle are normally based in North County Dublin, and are part of a sustainable grazing programme in Fingal County Council’s protected coastal lands.

It is envisaged that they will be at the Áras for a few months each year. Not having them present in late spring and summer allows the native flowers an opportunity to flourish and produce seeds.