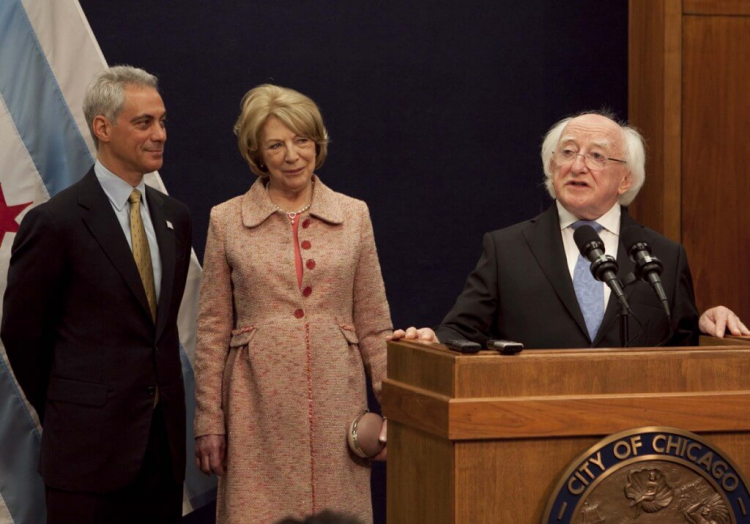 President Michael D. Higgins will make his second official visit to the United States since entering Office, from Thursday, 8th to Wednesday 14th May. He will be accompanied by his wife, Sabina Higgins.

The President will meet with Mayor of Chicago, Mr Rahm Emanuel and the Governor of Illinois, Mr Pat Quinn. He will also meet with members of Chicago’s Irish-American business community at an event hosted by the Chicago Board of the American Ireland Fund. The President will deliver an address at an event co-hosted by the Chicago Council on Global Affairs and the Harris School of Public Policy at the University of Chicago, in partnership with a number of Irish community and other local organisations.

A central element of the President’s visit will be his engagement with Chicago’s Irish community. He will visit Chicago Gaelic Park and the Chicago Irish American Heritage Centre, which will include a meeting with the Chicago Irish Immigrant Support organisation. At his alma mater, Indiana University in Bloomington he will deliver the annual commencement ceremony address and be presented with an Honorary Doctorate in Humane Letters.

The details of the visit are as follows:

The President will be met on arrival in Chicago on 8 May by Ms. Anne Anderson, Ambassador of Ireland to the United States and Mr Aidan Cronin, Consul General of Ireland to Chicago.

On Friday (9 May) the President will meet with Mayor of Chicago, Mr Rahm Emanuel at City Hall. In the afternoon he will travel to Indiana University in Bloomington where he will attend a dinner in honour of Commencement Speakers and Honorary Degree Recipients hosted by President of Indiana University, Mr Michael McRobbie.

On Sunday (11 May) President Higgins will attend a monthly Irish community mass and deliver an address to approximately 600 members of Chicago’s Irish community at Gaelic Park. He will attend and speak at a lunch hosted by the Galway Committee of Chicago Sister Cities International. In the evening he will visit and speak at the Irish American Heritage Centre, view an Irish cultural performance and meet with members and service users of Chicago Irish Immigrant Support.

On Monday (12 May) the President will attend and speak at a breakfast hosted by the Chicago Board of the American Ireland Fund. Following the breakfast, he will meet with the Governor of Illinois, Pat Quinn. The President will later deliver an address to Chicago’s business, academic, government and civic leaders at a lunch co-hosted by the Chicago Council on Global Affairs and the University of Chicago. In the evening the President will attend a reception, hosted by the Consul General and Mrs. Maedhbh Cronin where he will address some 400 members of the Irish community from Chicago and elsewhere in the mid-west.

On Tuesday (13 May) the President will visit the world-renowned Art Institute of Chicago, housing one of the largest permanent art collections in the United States and which will open a major exhibition of Irish objects in March 2015. He will then take a tour of Millennium Park and view the public sculpture ‘Cloud Gate’. At a lunch hosted by the University of Notre Dame Keough-Naughton Institute of Irish Studies, the President will deliver an address to guests associated with the Institute. He will also visit the Misericordiae Heart of Mercy Centre, Chicago which provides residential accommodation and services to 600 people of all ages with disabilities, and whose Executive Director, Sister Rosemary Connelly, is of Irish (Co. Mayo) parentage.

The President will depart Chicago for Dublin on Wednesday, 14 May. 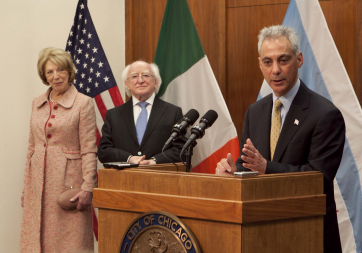 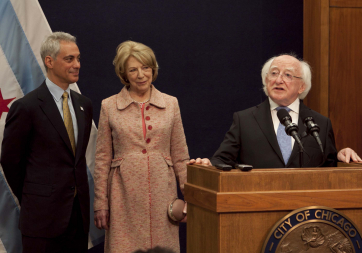 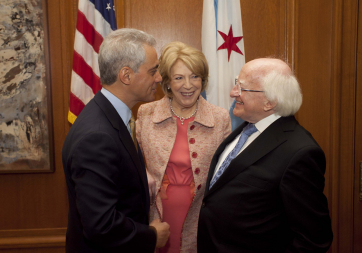 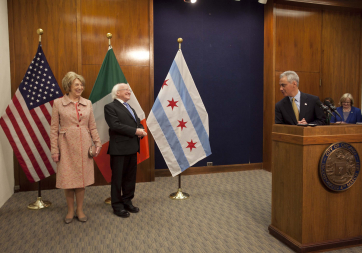