May I thank you for joining me at this workshop today. In my inauguration speech last November I undertook as part of my Presidency the hosting of a number of seminars which would reflect and explore themes that went beyond immediate legislative demands but which were important to the shared life of the Irish people.

I decided that the first of these Seminars to be held in November will be built on the theme of “Being Young and Irish”. So thank you again, for being here and being part of this regional discussion.

This consultation is taking place because of my belief that we are in a period of immense change, not only in Ireland, but in Europe and the world. There is no aspect of our lives together that must not be thought out anew – the way we wish to live with others, in dignity; the way our institutions must work and serve their purpose for the welfare of all our citizens; the way we define what is valuable in our personal lives, and above all in the lives we share together.

This generation of young people came of age during a period of rapid social and economic transformations. That change was forced on our citizens by the failure of assumptions about economic growth and the relationship of the economy and society that have been shown to be unsustainable with disastrous consequences. While those who are concerned for young people correctly point to opportunities that still exist for them, too many young people are suffering as a result of the contraction of our economy and its opportunities, its global context. The complex range of factors surrounding a failed model of the economy and its connection to society include its assumptions, its definition of economics itself, an unsatisfactory connection of economy, markets, state and political change in terms of transparency, choice and trust.

We are also experiencing in Ireland and across the globe – and not due in the main to the economic downturn – the absence of a shared sense of purpose. The late philosopher and intellectual Tony Judt has written of such a sense of common purpose and mutual dependence as must be at the heart of any community. “Acting together for a common purpose” he has said, “is the source of enormous satisfaction”. I am inviting you today to be visionary, to think together about such a common purpose, a common goal as would put a just and celebratory, emancipatory stamp on our shared future at home and abroad, to articulate new ways of thinking, new ways of working which are sustainable, enriching and in which the new definitions and visions of the economy might deliver a world that is both sustainable and just.

Those of you here may have been in touch with the Being Young and Irish 2012 initiative already through my website or through the Facebook page. You will have had access to the creative and intelligent ideas that young people have already contributed, and they are many. These contributors have been both practical and very inspirational. The tremendous commitment reflected in the submissions to creating an Ireland based on fairness, diversity and respect for human rights values has been impressive and very moving. It fills one with, not just hope, but such a strong sense of what can be achieved by taking charge of change.

Young people have been speaking about the need for a new way of decision making in Ireland, a way that places citizens of all ages and all backgrounds in the centre of the process – in from the margins of such authoritarian decision making that young people have given an account of in their submissions. A new kind of appreciation, too, is sought, by young people of what we define as work, for example in the community and in the home, and the value we place on participation and creative endeavours in the arts and in the community.

Some very practical proposals include proposals for renewing, revising, restructuring and expanding our civic education programmes, introducing them at a younger age providing for philosophy and ethics. These proposals have come through the consultation process.

While I read and hear of how marginalised and often silenced many young people have been, I have been impressed even more at how deeply young people are reflecting on these issues and how deep and rich the contributions to date have been. So today is about your own values, your life experiences and your own particular and unique wisdom and the vision and proposals you want to bring, articulate, debate and see as part of any proposals that come out of this process.

This initiative of mine is one part of my Presidency’s contribution towards a transformed Ireland; an inclusive ‘real republic’. At the heart of this consideration and process transformation is a deep concern for a society that is wounded and scarred but one whose successor you can help define. You have the opportunity today to articulate that kind of society you seek to live in with others, grow older in, and in the future hand on to other generations. Your gift to the reformed present, to the inclusive and creative future. You also have the opportunity to share and reflect on, to suggest and decide the kind of arrangements, choices, and compromises you seek, that you are willing to live with, and make to achieve that vision.

Today, as I have said, is the first of four regional workshops; when the workshops conclude the proceedings from these consultations and indeed all the submissions to the on-line consultation process will be reviewed and collated into a research report by a team of researchers from Dublin Institute of Technology. Some of those researchers will be present at each workshop to ensure that the spirit, the heart and soul of the process, is genuinely captured in the report and its proposals.

This process will conclude with the first seminar of my Presidency in Áras an Uachtaráin later in the year.

Some of you from each of the regional workshops will be invited to reflect on the findings of the consultation process and discuss and debate these, and distil the findings into your own declaration for change.

Senior policy makers and others from across Government will also be there to hear young people set out the vision, and the priorities for action, and changes necessary to achieve that vision.

Your declaration for change has the potential to inform, create and drive the change that is necessary.

The Take Charge of Change Declaration can be the cornerstone and foundation for a new kind of ethical, values based Irishness, rich with integrity and possibility, of which we can be proud at home and abroad.

Today, a team of professionals will support you, be there for you to assist you in doing your work of creating that vision which you seek. I want to take this opportunity too to thank those leaders, all of whom have volunteered their time to support you. My sincere thanks to all those young volunteers from Gaisce who have given their time freely. They are here to make today’s task as smooth as possible for you. My personal thanks to the visionary Working Group and all who assisted in the implementation team.

There is valuable work to be done by all those participating today. Meaningful, sustainable change does not come easily and requires demanding, honest and rigorous reflection. I have a real belief in the commitment of young people to do that work. You young people are the leaders of today’s workshop, collaborating together and with others throughout the initiative to build a vision of the Irishness best for all of us in different generations, for the future.

Thank you again for the submissions already received by some of you, thank you for being here today, and for the hard work you will do today, for sharing yourselves and contributing so generously to Ireland’s future. 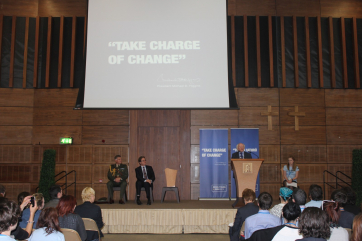 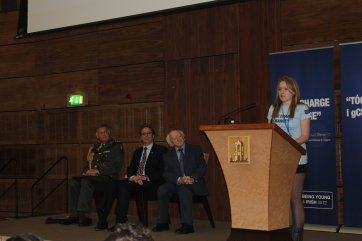 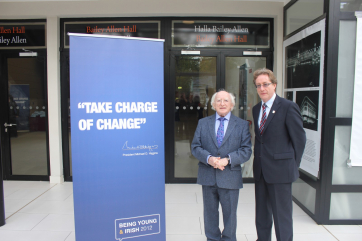 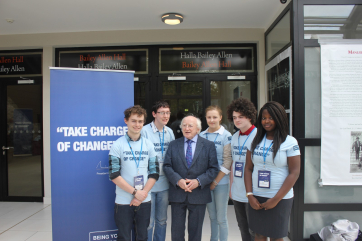 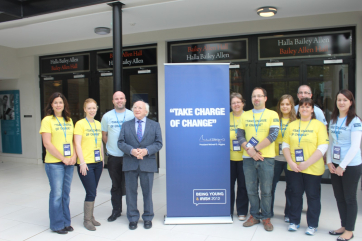 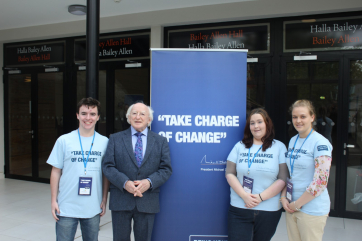 Being Young and Irish Galway Seminar