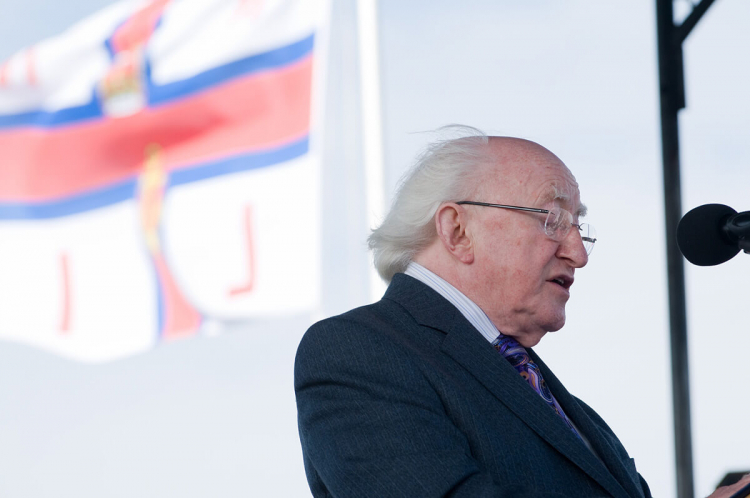 Remarks at the official unveiling of the Seapole Memorial

President Higgins’ Remarks at Unveiling of a Memorial to all those who have Lost their Lives at Sea
Sunday, 29th September 2013

I welcome having this opportunity to be with you today to inaugurate the newly designed memorial to those lost at sea off the Skerries and surrounding coast including Loughshinny where the Skerries fishing fleets originated. I would like to thank Councillor Ciaran Byrne for extending the invitation to me to join you and I thank you all for that warm welcome.

Skerries is a town with a long and multifarious history, a place that holds different memories and images for many Irish citizens. For some it is a coastal town that evokes and recalls bygone summers and childhood holidays. For others it is the place that has shaped and formed them; the town that, wherever life may have taken them, they will always call home. Now as also a busy commuter town, it retains both its distinctive character and charm, and one that still evokes and recalls for us its days as one of Ireland’s main fishing ports.

[Today, as on many occasions in the past, you have come together as a coastal community united in a sadness for the many lives that have been lost at sea here in the Skerries area, - or as they put it on Inis Oírr, those whom the sea has claimed - , and across Ireland over many years. But today you have also come together in a spirit of community solidarity, a spirit that defines and lies at the very heart of the town of Skerries.]

Two years ago Skerries was awarded the Community Group of the Year Award by Fingal County Council following a quite remarkable demonstration of unity and communal support when Ronan Browne and David Gilsenan went missing from Skerries Harbour. This year we once again witness that great well of community spirit; the strength it has and the power it gives us to turn ideas to living realities.

This memorial grew from the shadows of lives lost to the sea and the light of happy memories. The two hundred and seventy names inscribed on this memorial remind us of the lives that have been cut short by the sea; of the husbands, fathers, sons and brothers who have left behind so many grieving family members and so much lost potential. The memorial itself reminds us, not just of its origins as a Coast Guard lifesaving device, but also of a place of fun and happiness, a landmark that remained deeply rooted for many years into the lives of the young people of Skerries.

Some of you here today will remember how you used to climb the old look-out pole with your friends in its previous existence. You will no doubt remember the importance of getting a good foothold, the effort to keep ascending foot by foot, the encouragement of those on the ground cheering you on and the vision of reaching the top which kept you going.

Like those ascents, it has taken much vision, hard work, determination and commitment to bring this memorial to fruition. But it is a project that has received the overwhelming support of the Skerries community showing once again the resilience and energy that exists within this coastal community and your refusal to be defeated by loss and tragedy. Just as two years ago you came out in force to join the rescue services in the search for David Gilsenan and Ronan Browne, so too you garnered a strength of spirit and power of the collective to ensure the old look out-pole would return to Skerries and serve as a lasting reminder to all those who lost their lives in the sea that so many of you look out on every day.

I have spoken on many occasions of the need to build together an active, inclusive citizenship; one based on participation, equality and respect for all; of the importance of achieving a society where everyone receives the opportunity to participate at every level and in every way – to be the arrow and not simply the target.

Time and again, as I travel around the country, I am reminded of the great wealth of talent and creativity that our citizens have to offer society and am struck by the strength of character, commitment, and determination that exists in communities across Ireland despite the challenging circumstances we currently face. In fact, one of the great pleasures in my role as President of Ireland is the valuable insight that role has given me into the great spirit of active participation that exists in this country amongst people of all ages. Today is another reminder of those great qualities and of the pride we can take in the community spirit that still exists in such abundance in towns and villages across this country.

Today is a day of remembrance here in Skerries and one tinged with some sadness. It is also, however, a day of hope and renewal. The design and concept of this moving memorial is firmly grounded in the history of Skerries; in the rich past of a town that has been both a dynamic fishing port and a place where generations of Irish citizens first learnt the meaning of the word “community” and experienced that all important sense of belonging to, and identifying with, a place that they will always regard as home. It is also, however, a memorial that connects that past to the present and also to the future that we will shape and form together; a restored and re-imagined landmark that reminds us of the footprints that all of us leave behind us on the landscape and of how a life can be measured as much in deeds as years.

There can be no doubt that, just as this ‘Life Saving’ pole stands tall as a memorial dedicated to all those lost at sea and an important focal point for the bereaved families, it stands also as a symbol of togetherness both within the community and amongst those who go out to rescue others in peril of the sea. For many of you it will be a focus for remembrance and healing. I hope it will also be a reminder of regeneration and of how so much of the past lives on in future generations; generations that will continue to build memories in Skerries that they will carry forward into the future and into the lives of the children and grandchildren that will continue to climb this memorial, gathering courage and determination step by step.

In conclusion, I would like to commend all of those involved in the creation and realisation of this memorial. I thank Karl Duff and Shane Holland for their vision and innovation; and the communities in Skerries who have come together in the true maritime tradition of close knit coastal communities to establish and drive this project forward. Their dedication and perseverance in seeing this through is commendable.

[I am delighted to unveil this plaque today and to join you in remembering the many lives that we both commemorate and celebrate here today.]