Remarks At A Garden Party To Commemorate The 1913 Lock Out

Remarks By President At A Garden Party
To Commemorate The 1913 Lock Out
Thursday 10 July, 2013

Dia dhíbh a chairde, Sabina and I would like to welcome you and thank you all for coming to the Áras today – céad míle fáilte roimh gach duine atá anseo.

I hope that you are all enjoying your day at Áras an Uachtaráin gardens which are looking at their very best at this time of year due to the dedicated work of the garden staff. You have given a great response to our entertainers and the staff here have produced excellent fair for you to enjoy.

The garden party season is always a special time of the year in Áras an Uachtaráin, a time when Sabina and I get the opportunity to welcome families and communities to the Áras and to share with them this beautiful house and grounds.

This is, of course, a decade of important commemorations for us here in Ireland; a time when we remind ourselves of, and mark some of the significant events which lead up to and brought about the formation of an Irish free State.

It is a time to remember that a knowledge of our history local, national and international, is intrinsic to the creation of active and responsible citizenship and to the building of communities and a society that are fair, inclusive and participative.

This year we are celebrating the courage, endurance, and historical human rights significance of the Great Dublin Lockout of 1913. The centenary we celebrate in 1913 is about the struggle for the right to join a trade union; a right that was challenged in Dublin when 403 employers under the leadership of William Martin Murphy locked out their workers who were union members and required those who were not to sign a pledge saying they would not join the I.T.G.W.U.

It is worth recalling the Dublin of 1913 that gave rise to the Lockout. The death rate in Dublin in 1913 was worse than Calcutta, and child mortality was high, with almost a fifth of deaths in the city in 1908 being children under one year old. It is perhaps hard to believe today that about one-third of Dublin’s population lived in these appalling conditions.

On the occasion of the 75th anniversary of The Lockout Alan MacSimoin described the beginning of what would be remembered as the greatest confrontation between workers and employers in the history of the Irish Trade Union Movement; personalized in the confrontation between Trade Union leader Jim Larkin and the leading Irish owner of tramways, newspapers and property, William Martin Murphy. MacSimoin wrote:

“On August 21st nearly 200 men and boys in the parcels office of the Tramway Company received the following notice:- “As the directors understand that you are a member of the Irish Transport Union, whose methods are disorganizing the trade and business of the city, they do not further require your services. The parcels traffic will be temporarily suspended. If you are not a member of the union when traffic is resumed your application for re-employment will be favourably considered.”

On the morning of August 26th, the first day of Horse Show week, Murphy got a shock. At ten o’clock in the morning the tram drivers took out their union badges and pinned them in their buttonholes. They then walked off their trams, leaving them stranded in the middle of the road. The strike was on. Their demands were reinstatement of parcels staff, and equality of hours and wages with the tramway workers of Belfast.”

The Lockout had begun. The dispute would last from 26 August 1913 to 18 January 1914, and is generally viewed as the most severe and significant industrial dispute in Irish history.

With the Lockout, Ireland was to experience its first Bloody Sunday – August 31st, 1913 – as a result of which James Nolan and John Byrne would later die and over 500 people were injured. Following tetanus contracted from her being shot in the wrist by a strike-breaker, 16 year old Alice Brady would also die. Both James Larkin and James Connolly gave short speeches at Alice Brady’s funeral.

After four months of being locked out from their livelihoods, their children starving, and their families in dire hardship, the Lockout ceased in January 1914 and the workers were defeated. James Connolly would write in the Scottish newspaper Forward:

“And so, we Irish workers must go down into hell, bow our backs to the lash of the slave driver, let our hearts be seared by the iron of his hatred, and instead of the sacramental wafer of brotherhood and common sacrifice, eat the dust of defeat and betrayal.”

But while William Martin Murphy had won a victory in the short term, he was not successful in his greater aim of smashing the ITGWU or organized general trade unionism. Through the heroic efforts by members and organisations it had recovered sufficiently to defeat a further attempt at lockout in 1915 as other employers recalling the cost of 1913 refused to join Murphy in his action. By 1919 the International Labour Organisation would establish some of the principles he opposed as basic international labour law. While membership was initially decimated, by 1921 the ITGWU had 120,000 workers throughout the country. The union that William Martin Murphy had opposed had survived. A Housing Commission too followed that showed the incontrovertible evidence of poverty and slum life near the heart of empire.

We must always respect what James Connolly and Jim Larkin brought to the Trade Union Movement and what they faced in terms of the Lockout of 1913, and the social forces that colluded and combined to defeat them. We pay tribute to them today with this gathering, and to all of you, invited today, for your painstaking efforts to create a society defined by solidarity and equality for all its citizens.

Today, and right through the garden party season, we are fortunate to have been able to access for you a visible reminder of a founding event in our national history. We are deeply grateful to the National Transport Museum for lending us the open front tram which is on display here this afternoon.

May I urge those of you who haven’t already done so to view the open tram, which was such a part of ordinary day life in Dublin during that formative time in our national history that lead to our State being born, and relive in your imaginations those turbulent, seismic and critically important days.

May I, on all of our behalf, thank all those who have worked so hard on behalf of the Áras to make this a wonderful occasion for you. A big thank you to our MC, Joe Duffy, and also to the Cork Pipe Band, Ciara Sidine, Mary McPartlan, Jimmy Kelly and his band, the 1913 Wexford Lockout Choir, the Corish Wallace Players, and to the Coronas for the wonderful entertainment provided this afternoon. You all have enhanced our guests’ experience here today with your verve, talent and enthusiasm. Sabina and I are looking forward to seeing you perform in a few moments.

A big thank you, also, to the staff here at the Áras, to our friends in St. John of God’s, the Civil Defence, the Gardaí, the tour guides and all who have worked so hard to make today an occasion of friendship and joy. 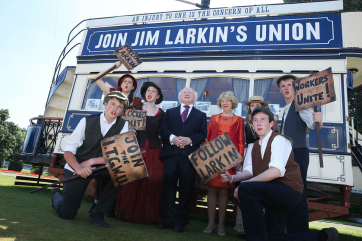 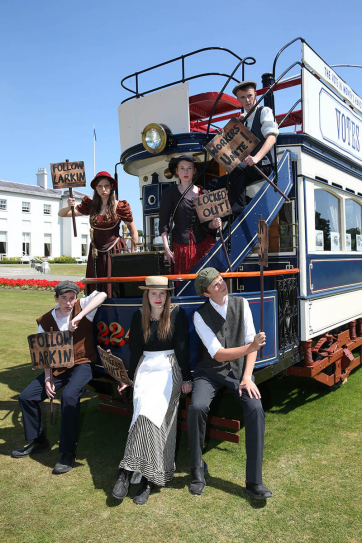 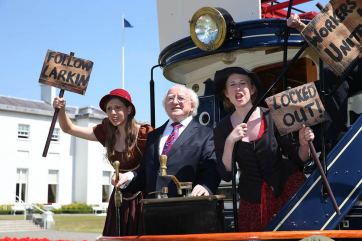 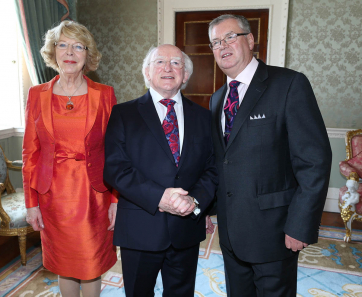 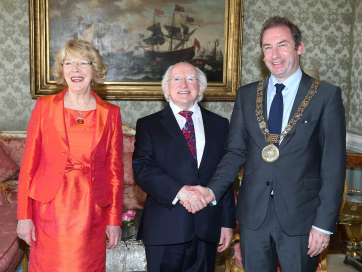 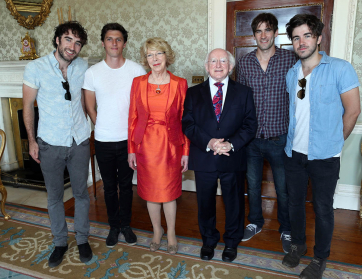