Taoiseach, Tánaiste, Members of the Council of State agus a cháirde:

[On behalf of Sabina and myself, I would like to welcome you all here today to Áras an Uachtaráin for this very special occasion. I wish in particular to welcome our guests of honour – the recipients of this year’s Presidential Distinguished Service Award for the Irish Abroad.]

Throughout our history, migration has been a theme that occurs again and again. It is a theme rewritten by each generation, as the nature of the migratory experience changes and evolves; but it is a theme that remains deeply engrained in the Irish psyche and one that has played a significant role in defining us as a people and as a society.  It is an inescapable part of the Irish identity.

Today our Diaspora stretches far and wide and it is estimated that up to 70 million people around the world are of Irish descent. While our history shows that, for some, emigration was a sad and lonely exile with challenges to be overcome that were harsh and often exclusionary, there are also many positive stories of Irish emigrants who have made their mark in communities across the continents – working, making friends, raising and educating families, and while contributing to their host destinations, living rich and fulfilling lives in their adopted countries, also remaining true to, and proud of, their Irish heritage.

As a nation we remain very conscious of the enormous debt of gratitude we owe to those who have left these shores over so many years, often reluctantly. Their hard work, tangible support and generous encouragement to those who remained at home have been very influential in shaping and crafting the modern Ireland we know today.

Our relationship with our Diaspora is deep and profound. At its heart lies a sense of inclusivity and of the coming together of Irish people, wherever they may be in the world, in a spirit of support and solidarity. It also builds a bridge of mutuality and kinship between those who have gone and their fellow Irish in their homeland of origin, and it encourages and celebrates what we can and must do together.

As Ireland emerges from the shadow of the disappointment with mistakes inflicted or chosen in recent years, one of our challenges will be to ensure that what follows is a version of Irishness of which we can all be proud. Rather than relapsing back to a model that failed, we need to open a new chapter, part of which might be to promote an ethics of care – one that champions the values of community, mutuality and solidarity. In doing so, I can think of no better role models than our awardees this evening; people who, through their sustained efforts, have shown care – care for their immediate community, for their homelands, both of birth and affinity, for their culture, and for the plight of the weak and vulnerable across the globe.

Our Diaspora has worked incredibly hard at disseminating Irish culture in their new homes around the world, including our music and song, our film and theatre, our traditional sports and our incredibly rich literary tradition.  As a man who has made music his life, Dr. Mick Moloney’s depth of knowledge of traditional Irish music and its links with other folk genres has been generously shared with students and with music lovers across the world. It is creative people like Mick who have contributed to the wonderful reputation that Ireland enjoys for the quality of its art and culture, allowing the rest of us to walk with pride in this reflected glory.

During our challenging economic times, we can draw great hope and inspiration from the knowledge that we are focusing once again on the innate strength and potential of our local communities. It is a powerful spirit of community and solidarity that can be witnessed, not only here in Ireland, but in the work undertaken by so many members of our Diaspora as they support fellow citizens in Irish communities abroad.

Mr. Seamus McGarry has, for many years, provided a strong voice for Irish people living in Britain; not least through his work as Chair of the Federation of Irish Societies at a time of great sensitivity in relations between our two countries. Its current Chair, Dr. Mary Tilki has also been an exemplar of leadership, advocating tirelessly on health matters for the Irish community, and highlighting the inherent dignity and needs of the elderly Irish living in Britain.

On the other side of the world, Consul General Rodney Walshe has for decades also worked with immense dedication to assist the Irish living in New Zealand; supporting Irish interests and creating a true sense of community in that distant, beautiful and heart-breakingly successful rugby nation, whose luck extends beyond the final whistle.

The leadership and support these three individuals have shown in their communities reminds us of our good fortune in being part of a larger global family whose loyalty and affinity to Ireland and its people remains so steadfast and so committed.

Our Irish Diaspora has enabled us to create positive connections with many countries around the globe including in the areas of investment, tourism, trade, university links and economic partnerships. The contribution of Dr. Craig Barrett to such important connections is immense. His work, both academically and as Chairman of Intel, has lead to important investments in Ireland and invaluable partnerships with higher education institutions. Craig’s chairmanship of the Irish Technology Leadership Group has also made a huge contribution to our recovery efforts.

Ireland’s reputation abroad has also been enormously enhanced by the expertise and policy formulation of Mr. John Martin, whose contribution to the work of the OECD has secured enormous respect and influenced Governments throughout the world. John’s promotion of the role of social inclusion within the OECD policy portfolio is a contribution that has global significance.

As Uachtarán na hÉireann, I have often witnessed the great commitment of Irish people abroad to those who are vulnerable and in need – reaching out to them through peacekeeping, humanitarian and development initiatives. Sr. Cyril Mooney in India has for decades been empowering vulnerable and marginalised people through the provision of education. Likewise, Dr. Anne Merriman has ministered to the very ill in several countries in Asia and Africa and has transformed the provision of palliative care. Their care, compassion and sheer resilience are values that should inspire us all as we go about the business of our daily lives.

I know that many of those who emigrated left Ireland during troubled times. The solidarity and commitment of Irish communities overseas, particularly in the United States, to sharing our long and difficult journey towards peace and reconciliation has earned the profound gratitude of people across the island of Ireland.

This work was supported and enhanced over many years by organisations like the American Ireland Funds, which Ambassador Dan Rooney was instrumental in establishing in 1976. In his native Pittsburgh, Dan was for decades a champion of many good causes associated with Ireland, as well as running a very successful Club in a football code that I still find challenging. Until last year, Dan and his wife Patricia were outstanding diplomatic representatives of the US in Ireland and I was proud to call them my neighbours here in the Phoenix Park and to have them as guests of Sabina and myself in the Áras.

While Senator George Mitchell is unable to join us here this evening, I look forward to receiving him on another occasion. The Senator’s patience, wisdom and good humour were without doubt key ingredients in the process which led to the Good Friday Agreement. There can be no doubt that his work for peace has changed the lives of Irish people on all parts of the island.

[Each of our awardees is recognised among their own communities abroad for their work, dedication and achievements. This evening is an opportunity for me, on behalf of the people of Ireland, to say thank you to our ten recipients - go raibh míle maith agaibh.]

We deeply appreciate, and take pride in, the service you have provided; the support you have given; and the sacrifices you have made on behalf of Ireland and of Irish people wherever they may be. Those contributions have not only benefitted Ireland and Irish people but also our reputation across the world.

In conclusion, I would like to take this opportunity to convey my gratitude to the members of the High Level Panel that had the task – both rigorous and uplifting at the same time – of recommending ten individuals to receive this Award from many worthy and distinguished contenders.

I would like, therefore, to  thank David Cooney, Secretary General of the Department of Foreign Affairs & Trade, who chaired the Panel; Adrian O’Neill and Martin Fraser, Secretaries General of my own Office and of Department of the Taoiseach; and also Sally O’Neill Sanchez, Professor Declan Kiberd, Fr. Bobby Gilmore and Kingsley Aikins.

I again congratulate each and every one of our recipients and thank them for the generosity of spirit, immense determination and ceaseless work for others which have made each of these awards so truly deserved. 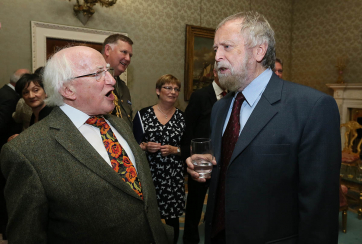 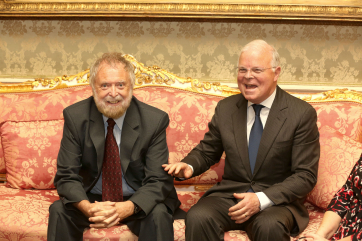 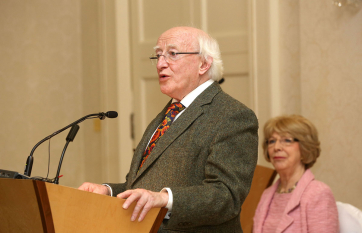 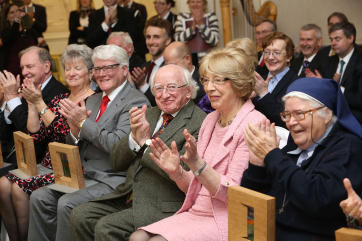 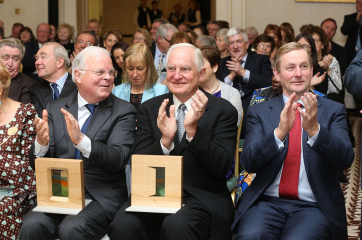 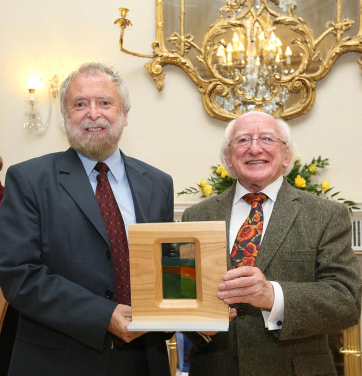 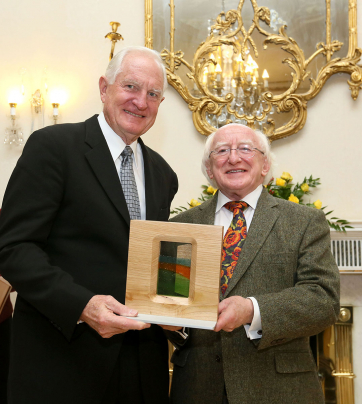 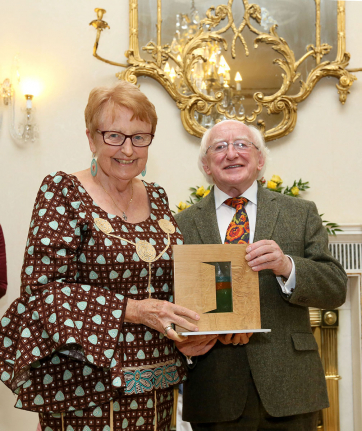 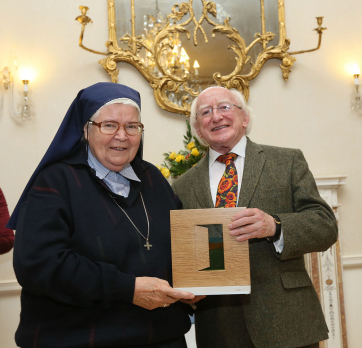 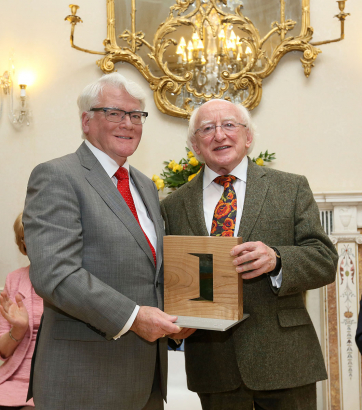 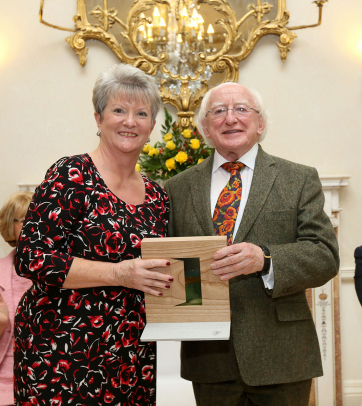 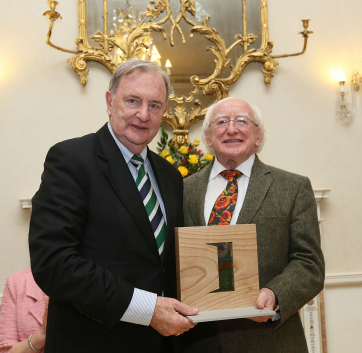 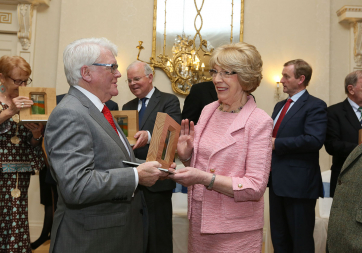 President presents the Presidential Distinguished Awards for the Irish Abroad