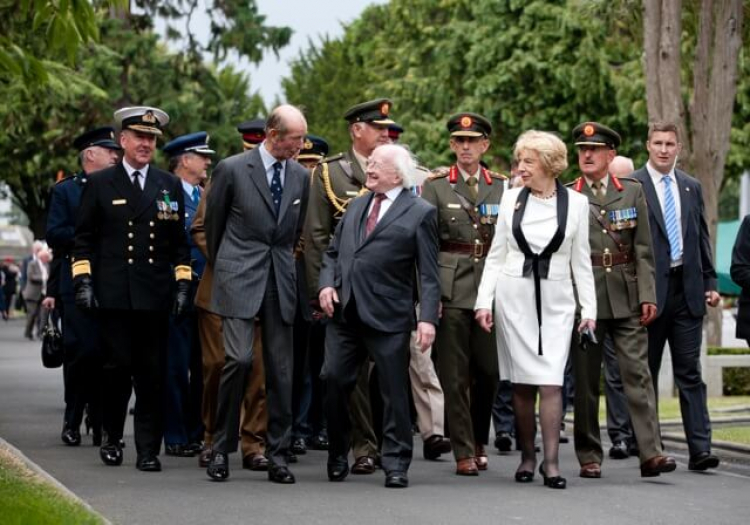 Speech by President Michael D. Higgins
at the dedication of the Cross of Sacrifice
Glasnevin Cemetery, Dublin
Thursday, 31st July 2014

A Airí / Ministers, Secretary of State;

A Cheann Foirne agus a Óglacha na hÉireann / Chief of Staff and Members of the Defence Forces, Representatives of the British Forces;

A Dhaoine Uaisle / Ladies and Gentlemen;

It is important that the First World War, and those whose lives it claimed, be not left as a blank space in Irish history. Today therefore is a significant day, as we dedicate this Cross of Sacrifice – the first such Cross to be erected in the Republic of Ireland.

On an occasion such as this we eliminate all the barriers that have stood between those Irish soldiers whose lives were taken in the war, whose remains for which we have responsibility, and whose memories we have a duty to respect.

[In so many graves across Europe, the flower of a generation lies together, and all of their graves taken together hold the victims of that war.]

We cannot give back their lives to the dead, nor whole bodies to those who were wounded, or repair the grief, undo the disrespect that was sometimes shown to those who fought or their families.

But we honour them all now, even if at a distance, and we do not ask, nor would it be appropriate to interrogate, their reasons for enlisting. If they could come back no doubt they would have questions to ask as to why it was, and how it came to be that their lives were taken.

To all of them in their silence we offer our own silence, without judgement, and with respect for their ideals, as they knew them, and for the humanity they expressed towards each other. And we offer our sorrow too that they and their families were not given the compassion and the understanding over the decades that they should have received.

The suffering visited upon our own people at home had perhaps blinded our sight and hardened hearts in so many ways.

As His Royal Highness, the Duke of Kent just said in his speech, the Cross of Sacrifice stands in cemeteries in the care of the Commonwealth War Graves Commission throughout Europe, indeed across the world – from Flanders to Gallipoli. As one in a web of many others, this monument reminds us that WWI was a war with a global reach, one that affected every part of the European continent – and that the Ireland is an integral part of that history.

In recent years, an increasing number of writers and scholars, religious and political leaders have redirected our gaze to the complexity of the Irish engagement with WWI, allowing for a more inclusive remembering at public level.

As we are facing into that past, we are also progressing in our understanding of the complicated intertwining of loyalties which characterised Irish identities at the turn of the 20th century.

This is facilitated by easier access to, and a renewal of interest in, the writings of Irish soldiers – their diaries, notebooks, letters and poems. The line “not for flag, nor King, nor Emperor” in the sonnet Thomas Kettle dedicated to his three-year old daughter, Betty, four days before his death during the battle of the Somme, or the poem Francis Ledwidge wrote in honour of his close friend Thomas McDonagh while recovering from his wounds in Manchester in 1916, lend us a better sense of those men’s multilayered senses of belonging.

Such writings throw light on the complex motives and circumstances that led so many Irishmen to volunteer to join the British Army. Whether it was a true belief in ideals; unionist or nationalist feelings, and within that, many different versions of each; escape from poverty; the search for adventure; a friendship network, or the continuation of a family tradition – it is not for us to judge those who fought and their motivations. We should seek, rather, to show such respect for this complexity as does not sink into relativism, or a glossing over of differences, some of them enduring and not easily reconcilable.

One century later, the First World War remains somewhat of a mystery. Its origins are mysterious. So is its course. Why, when the hope of bringing the conflict to a decisive conclusion was dashed within months of its outbreak, did the combatants decide to persist, to mobilise for total war and eventually to commit the totality of their young manhood to mutual destruction?

If all wars are an object of infinite sadness, this particular one also remains as an inextinguishable source of bewilderment.

But while historians still struggle to ascribe a definite meaning to the First World War, we now see more clearly what it is that was sacrificed: health, both mental and physical; youth – life itself. Huge destruction was inflicted on families and communities; a whole generation was destroyed that would have furnished their countries with their workers, farmers, scholars, artists, administrators and political leaders.

Not only did WWI bring human devastation and economic ruin to Europe, it also shattered the promise of a progress facilitated by science, technology, the promise of democracy; it put an abrupt end to the aspirations of happy modernity and ongoing human improvement harboured by Europeans for the previous forty years: “Never such innocence again”, as Philip Larkin put it in his poem “MCMXIV”.

Today, on the eve of the centenary of the outbreak of the First World War, we are invited to remember with authenticity and historical accuracy the sacrifice of so many Irish men and women who fought alongside soldiers from different nations, backgrounds and social circumstances. We are invited to go beyond disputes as to the legitimacy of the various motivations and causes embraced by those men, in order to reflect, together, on what was lost for everybody in the destructive experience of war.

We are here to remember with respect and dignity. Our duty is to mark the graves of all who have lost their lives, wherever they may be – and I wish to salute the valuable work carried out by the Commonwealth War Graves Commission and the Glasnevin Trust to ensure that this duty is fulfilled.

The wall that stands before us lists 166 Commonwealth burials from the First World War. I invite anyone who reads those names to reflect and give a moment in respectful memory to the individual stories that go with them. Each man had parents and friends; many had a wife or a lover, children, siblings.

Indeed beyond the staggering statistics associated with WWI – a war whose casualties number in the millions – it is important, I believe, that we do justice to the dead by endeavouring to recover the human dimension of the experience of war, the tragedy of each single death, of every life shattered.

And while it is hard for us to recover imaginatively what life in the trenches was really like, again it is perhaps through reading the writings of the soldiers themselves that we can gain a better sense of the experience of those who fought and lived on the battlefields – the cold and damp, the confined space, the insipid food, the rats and lice, the deafening din of shelling for days on end, the fear, the stench of rotting flesh, the muddy waste land all around, the barbed wire and the burnt villages.

In the letters of soldiers, in the memoirs some of them have written after the war, we understand the harrowing character of a mechanical, industrial war. We also must surely be moved by the great humanity those soldiers felt for each other in the face of an incredible carnage. In their letters the combatants confer the title of courage on each other, thus inviting us, today, to acknowledge agency on the part of the men and women of the past, and to abstain from any portrayal of them as mere passive victims.

These writings of WWI soldiers also call upon our contemporary responsibility not to leave the power and energies of nations, their formidable industrial capacity, be unleashed for mutual destruction.

Finally, let me say how the welcome and significant progress of our understanding, in Ireland, for the period of the First World War has also given us a deeper empathy with the British people, for whom WWI, its experience and its recall, form such an important element of their identity and mythology. It is an honour to host a monument to that memory.

Just as the generation that produced WWI soldiers had to leave behind the idiom of the 19th century – that language used to celebrate the idea of progress – we today are invited to leave behind some of the terms and concepts of the 20th century, with its grammar of binary divisions between “the enemy” and “us”.

The time has come for an ethics of narrative hospitality to replace our past “entrenchments” – that awful word bequeathed to us by an era scarred, not just by the consequences of war itself, but by the effect of the very idea of War, of the possibility of total war, on subsequent generations.

I want to thank you, Sir, for your presence and for your words of recognition for the Irish men and women who were killed during the First World War.

The ability to share sombre and profound national memories is an important act of friendship and respect: as friends we, Irish and British, share this moment of remembrance; and in mutual sympathy we dedicate this monument to the memory of all those who lost their lives during the too long, dreadful years of 1914 to 1918.

Let us now, together, cultivate memory as a tool for the living and as a sure base for the future – memory employed in the task of building peace. 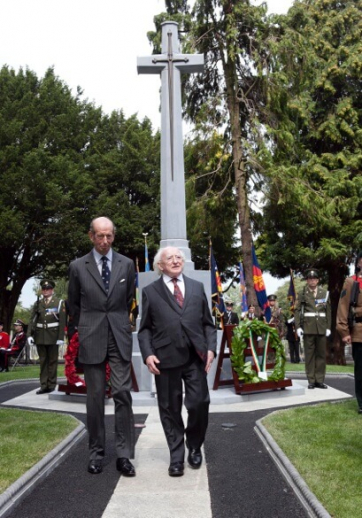 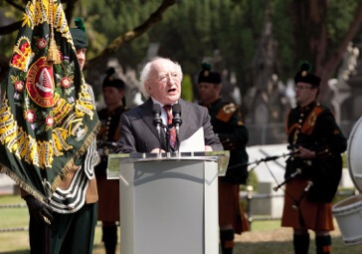 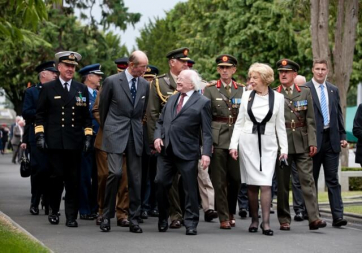 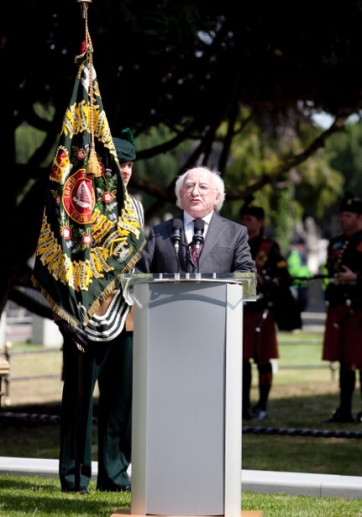 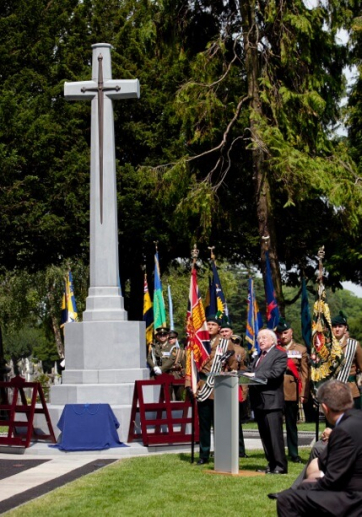 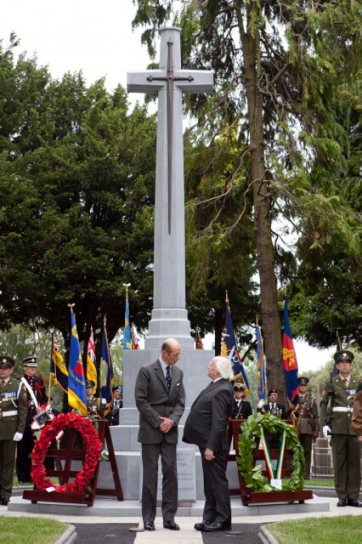 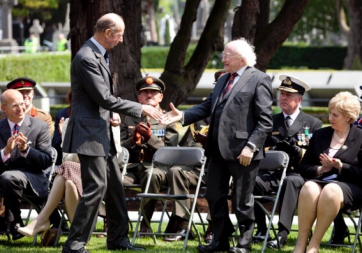 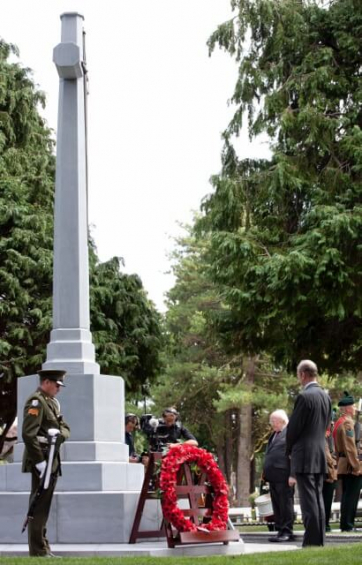 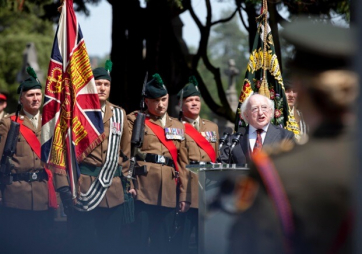 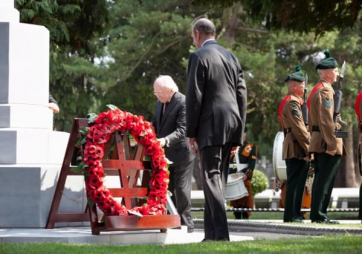