We must enable preparedness in the areas, and amongst the people, most at risk. That is what global responsibility and solidarity demands.

Over the past half a century, Concern Worldwide has become one of the most well-known humanitarian organisations in the world. As an organisation with a committed and indeed courageous staff, it has earned the respect of donors, peers, partner organisations and communities, based on its long-standing track-record of delivering relief to the people of the poorest countries of the world facing extreme poverty and hunger.

Concern Worldwide has to do its work in ever-changing conditions, be it when addressing the consequences of climate change, conflict, failed migrations, unfair trade or crippling, often odious, debt. And structural features of gross inequality that persist.

Extreme poverty and suffering persist in too many parts of the world.

One billion people struggle to live on less than $1.25 a day. What a moral outrage it is in 2020, indeed, what a great failure, with all the material resources available, that our boundless capacity for creativity and innovation, and the fruits of enterprise, science and technology, remain focused, not on the ending of global hunger or famine, or the promotion and preservation of peace, but yet again on the pursuit and prosecution of war, and the promotion of a paradigm of consumption and accumulation.

Of course, the COVID-19 pandemic that has enveloped the world now presents new, additional challenges in terms of its effects on those affected by poverty, inequality and hunger.

COVID-19 is a global problem, and thus requires a global response.

Societies differ in their capacity to respond, such as those in the poorest nations who are in such a perilous position in terms of possessing the resources that might be utilised in responding to the pandemic. While COVID-19 is a global threat, it is the most vulnerable who are most at risk.

UN Secretary-General Guterres correctly underscored this, telling us in the clearest terms that if COVID-19 is to be countered, richer countries must assist those less developed, or potentially “face the nightmare of the disease spreading like wildfire in the Global South, with millions of deaths and the prospect of the disease re-emerging where it was previously suppressed”.

Closed borders, restricted markets and the economic turmoil that has resulted as a consequence of the response to COVID-19 all have potentially disastrous effects on the poorest of the world.

According to some of the recent research published by Oxfam, the pandemic could double chronic hunger in poorer parts of the world such as Africa, with up to 800 million people at risk.

We are standing on the precipice of a hunger pandemic. New and imaginative initiatives are now called for to avoid disaster.

At ground level, both the virus and the restrictions imposed to curb its spread are disrupting planting, harvesting, the movement of farm labour, and the scale and distribution of produce. There are urgent calls from those affected and at risk for borders to remain open for essential agri-food trade.

Yet, we must remind ourselves that once this crisis is over, there will be other crises and other pandemics with which to contend in the future.

We must enable preparedness in the areas, and amongst the people, most at risk. That is what global responsibility and solidarity demands. All of the structural impediments will remain if we do not act, including a wall of debt payments that awaits African nations based on current policy.

There now exists an opportunity for the international community to address this burden of debt; an historic opportunity for the world to harness the groundswell of compassion and solidarity that we see around us to help build a better, sustainable and more responsible shared world; to offer solidarity to the poorest nations of the globe.

Responding adequately not only to COVID-19, but to the global structural inequalities can, by recognising agency, provide those poorest countries of the world with the prospect of carving out a path of peace and a brighter future of sufficiency and fulfilment, not only for all its citizens, but also for the achievement of a sustainable connection between economy, society and ecology.

May I conclude by thanking and paying tribute to all the staff and volunteers of Concern Worldwide for your hard work. Mar Uachtarán na hÉireann, as President of Ireland, I stand with you in solidarity as you continue the fight for the vital cause of ending extreme poverty and hunger in the poorest parts of the world. 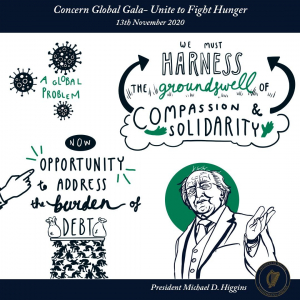