It is a pleasure to be here with you today on this special occasion to celebrate, at local level, Listowel’s achievement in becoming crowned Ireland’s tidiest town in 2018. While the formal ceremony was a moment of celebration at the 60th SuperValu Tidy Towns award ceremony held at the Helix in Dublin City University (DCU), the local celebration is even more important. Listowel has long been involved with the Tidy Towns competition. It last won the award in 1978, but Listowel has won a gold medal every year since 2008 in the competition and, of course, was Ireland’s tidiest small town in 2015 and 2016.

There were a record 833 entries in 2018 across four categories in this the 60th year of the competition, and Listowel fought off fierce competition from many places who had the advantage of far higher numbers of volunteers, thus making this achievement even more impressive. Indeed, the judges remarked that Listowel’s victory was, “a tribute to all the people of the town and to the local authority”.

Tidy Towns is based on community mobilisation around a shared vision, a mobilisation that draws active engagement by citizens. I wish to commend the Chair of Listowel Tidy Towns, Julie Gleeson, for her team’s hard work and dedication.

For example, I understand that you marshalled a ‘dawn crew’ – a group of volunteers who met at 7am during the summer to pick up litter and water the flower baskets.

Such level of tireless dedication and community spirit that can be found throughout our country is so very admirable and inspiring. Moreover, it shows the value that we as humans put on a sense of place, and the pride we take in our local communities. The more recently established annual all-Ireland Pride of Place Awards is another example of active citizenship based on community participation and volunteerism.

Listowel is a market town and, since 2000, has been designated as one of Ireland’s 26 heritage towns, but has, perhaps, not heretofore been considered a tourist town in the manner that many other towns in Co Kerry have been considered for decades. I believe that this win should put Listowel on the tourist map, making it a potential destination for both our overseas visitors and Irish tourists.

Of course, Listowel has a heritage that is precious, unique – the written and spoken word. Listowel is well known for its writers’ festival. It is often referred to as the ‘literary capital of Ireland’, nationally and internationally. With internationally acclaimed playwrights and authors such as Bryan MacMahon and, Listowel’s most famous son, perhaps, John B. Keane, who I would have no doubt, been proud of the award. It is well remembered among the local community that he was a big supporter of Tidy Towns.

I was delighted to have an opportunity last night to visit the Writers Centre, which is such a fitting celebration of the rich contribution of the writers and people of this town, and of this county, to the written word and to Ireland’s literary heritage.

In the 60 years of the Tidy Towns competition, this is the fourth time that a Kerry town has won the overall title. I wish to recognise the hard work of Archdeacon Michael Murphy who played a pivotal role in three Kerry towns winning the overall National Tidy Towns award. His reputation is one of being an inspiring figure who has always led by example and encouraged others in the daily work that is required on the streets if the town is to put itself in contention for success. Those three towns which bore the mark of his efforts and others, Sneem, Kenmare, Killarney are now joined by lovely Listowel.

Listowel is indeed a special place endowed with a rich history and encircled by a stunningly beautiful landscape. Its architectural heritage and historic importance, of course, were key determinants in the town being granted heritage town status.

Listowel’s history dates back to at least 1303 when it first appears in the Plea Roll. Fortress to the Fitzmaurice family, the town developed around Listowel Castle and its square. The last bastion against Queen Elizabeth I in the Desmond campaign, Listowel Castle was built in the 15th century and was the last fortress of the Geraldines to be subdued.

It fell after 28 days’ siege to Sir Charles Wilmot on 5 November 1600, who had the castle’s garrison executed in the following days.

The castle then became the property of the Hare family, the holders of the title of Earl of Listowel, after reverting away from the Fitzmaurices, Knights of Kerry.

It is now a national monument, and was subject to restoration by the Office of Public Works from 2005. Another smaller castle at Woodford, Listowel, was built in the 17th century by the then Knight of Kerry.

Listowel played a role in Irish railway history as it was the site of the world’s first monorail operation. The Listowel and Ballybunion Railway was built to the Lartigue system, with a double-engine steam locomotive straddling an elevated rail to connect the town with Ballybunion. In 2003, a one-kilometer-long replica of the original mono-railway was opened.

As I mentioned earlier, Listowel is home to Ireland’s oldest literary festival which will turn 50 years’ old next year. Since its inception in 1970, Listowel Writers’ Week has been recognised as a primary event in our literary calendar. North Kerry is the birthplace of many of Ireland’s most prominent writers, including John B. Keane, Bryan Mac Mahon, Professor Brendan Kennelly, Seamus Wilmot and Leslie Boland to name but a few. The

Writers’ Week Festival was established to celebrate those writers and to provide an opportunity for other Irish writers to develop their talents and meet new audiences.

The concept of the Literary Workshop was first introduced at Writers’ Week in 1971 by Bryan MacMahon and it was as follows:

Irish writers would share their skills in poetry, fiction, theatre, and screen – with workshops in song-writing, comic-writing and storytelling also subsequently added.

Competitions were introduced, together with a series of literary awards, which have given recognition to new writers. In that time, many Irish and international literary figures have gathered in Listowel at the annual festival to celebrate the work of new and established writers in an atmosphere of learning and celebration, providing new and established writers an opportunity to discuss and showcase their work before a national and international audience. It also provides a programme of literary events, including lectures, readings, workshops, book launches, seminars, theatre, literary and historical tours, art exhibitions, music and dance.

In addition to all of the above, Listowel also hosts an annual Food Fair which has been running since 1995. The festival promotes local artisan food products, and attracts celebrity chefs, nutritionists and artisan food entrepreneurs. Each artisan producer is passionate and proud about what they produce, especially where the whole family is involved, and one of the best ways in which we can play our part in helping the local economy is to source local ingredients and shop locally, and, in doing so, we are also playing our part in reducing our carbon footprint and helping to mitigate climate change.

It has been said that 90% of success is built on ‘just showing up’. Success in the Tidy Towns is not achieved without a lot of people showing up – each morning, each week – and investing their talent and their labour to transform their town into a place they really feel proud about. Listowel has entered the Tidy Towns competition for many years and your record has been one of sustained and consistent progress. I know how high the competition’s standards are and how difficult it is to progress at the top end of the competition. That you have achieved the award of Ireland’s Tidiest Town is testament to the massive effort put in by your active, vibrant and energetic community.

In recent years, since I was elected President of Ireland, I have spoken often of the importance of an active citizenship in bringing about positive changes to our communities. The emphasis in Tidy Towns is very much in this vein, focusing on a key manifestation of active citizenship, that of community participation – people of all ages working together towards a common goal.

These efforts not only visually enhance the place where you live, but they also provide you with the knowledge and experience of what can be achieved when people work together in partnership towards a shared goal. Ní neart go cur le chéile – we are stronger when we work together.

This collective approach has been crucial for all of the very many communities, the length and breadth of the country, who set out each year with the noble ambition of simply improving the place in which they live. Even after 60 years, the Tidy Towns competition is still growing and getting stronger: a record 833 towns and villages entered the competition last year. The effort of all of these communities is sustained by willing and enthusiastic volunteers, keen to make a positive difference in their own communities.

Community-based initiatives such as the Tidy Towns have never been stronger in terms of voluntary activity and citizen participation. People are setting about finding a better version of Irishness than the acquisitive individualism that drove the worst aspects of the Celtic Tiger. They are reaffirming the old decencies in Irish life and drawing on the ethical values that are being forged by our talented and energetic people of all generations. They are demonstrating community cohesion, neighbourly cooperation and creative endeavour. They are renewing our Republic so that it does full justice to the values of fairness, equity and participation. In short, they are imagining an Ireland which all of us are proud to help shape and share, and happy to bestow to the following generations in better condition than we inherited it.

Listowel’s triumph would not of course have been possible without the massive support of the entire community. Today I would like to recognise and acknowledge the dedication and commitment of all of those who volunteered their time and resources in working towards this great achievement – residents, schools, local businesses, community employment workers, Listowel Town Council, Kerry County Council and other public agencies; you should all be very proud of your contributions.

It is so encouraging to all of us to see young people involved in their community, and I commend you for actively encouraging them to enter the many Special Awards associated with Tidy Towns. I believe it is important to engage the talent and creativity of our young people, to acknowledge that they are a positive resource in the present moment not just a potential resource for the future.

The commemorative plaque will stand proudly in your town as recognition and a reminder of your achievement and will inspire those who follow, to encourage them in maintaining the exceptional standards that you have set.

In conclusion, Listowel, remember that today is your day to celebrate, and I would like to thank you again for inviting me to share the day with you. I hope you enjoy the occasion. As for tomorrow, I have no doubt that the hard work will continue – the ongoing business of just “showing up”.

I would like to close, if I may, by quoting the great John B. Keane of Listowel:

“Beautiful Listowel, serenaded night and day by the gentle waters of the River Feale.

Listowel, where it is easier to write than not to write,

Where first love never dies, and the tall streets hide the loveliness,

The heartbreak and the moods, great and small,

Of all the gentle souls of a great and good community.

Sweet, incomparable hometown that shaped and made me”. 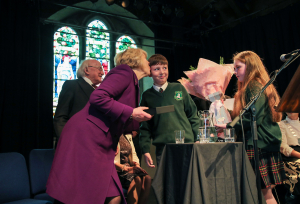