You are all most welcome here this afternoon to Áras an Uachtaráin.

It is a great pleasure for Sabina and I to welcome you all here today and to extend a special cead mile fáilte to all those of you, whatever the distance, who have travelled here to be with us. We are delighted you are here, and I hope you will enjoy your visit to Áras an Uachtaráin, home of all of the Presidents of Ireland since 1938.

Today’s garden party provides a valuable opportunity to thank and acknowledge the work of those who supported and continue to support those of our citizens; women, children and men whose lives have been impoverished by violence and abuse, often inflicted on them by those to whom they are intimately related or connected, thus making their homes not the places of safety and security they should be, but spaces defined by fear and uncertainty.  Internationally, violence has become a weapon of war with rape of women and men reported recently, for example, in Sudan.  I pay tribute to the courageous reporting of Fergal Keane.

Violence is not inherent in the human being.  It is learned, copied, imitated, absorbed in an acculturation process.  The pursuit of equality for all citizens has been a central focus of Sabina’s and my public life. We are both, however, acutely aware that it is a struggle that cannot be overcome as long as there continue to be thousands of women, and many men, who live lives as victims of unprovoked violence, indeed often finding themselves trapped in cruel relationships, relationships they may have entered into with so much joy and hope for the future.

That is greatly worrying and underlines the urgency of empowering women around the world and ensuring they have, of course, a basic right to be safe but also an equal right to participate in education, in the workplace, in politics and in the economy and have equal access to, control over, and ownership of land and other productive assets.

Goal number 5 of the Sustainable Development Goals, signed up to by 193 nations of the U.N and which came into effect in January 2016 calls on all the nations of the world to, I quote:

“Achieve gender equality and empower all women and girls.”

According to the UN, “gender equality is not only a fundamental human right, but a necessary foundation for a peaceful, prosperous and sustainable world.”

Providing women and girls with equal access to education, health care, decent work, and representation in political and economic decision-making processes will nurture sustainable economies and benefit societies and humanity at large.  A record 143 countries guaranteed equality between men and women in their constitutions as of 2014.  However, another 52 had not taken this step.  In many nations, gender discrimination is still woven into the fabric of legal systems and social norms.  Even though SDG5 is a stand-alone goal, other SDGs can only be achieved if the needs of women receive the same attention as the needs of men.  Issues unique to women and girls include traditional practices against all women and girls in the public and private spheres, such as female genital mutilation.

Child marriage has declined over the past decades, yet there is no region that is currently on track to eliminate the practice and reach SDG targets by 2030.  If current trends continue, between 2017 and 2030, 150 million girls will be married before they turn 18.  Though child marriages are four times higher among the poorest than the wealthiest in the world, most countries need to accelerate progress among both groups in order to reach the SDG Goal 5 target to eliminate child marriage by 2030.

Achieving gender equality will require enforceable legislation that promotes empowerment of all women and girls and requires secondary education for all girls.  The targets call for an end to gender discrimination and for empowering women and girls through technology.  Some have advocated for “listening to girls”.  The assertion is that the SDGs can deliver transformative change for girls only if girls are consulted.  Their priorities and needs must be taken into account.  Girls should be viewed not as beneficiaries of change, but as agents of change.  Engaging women and girls in the implementation of the SDGs is crucial.”

This call is a recognition that if we committed to ending poverty and hunger across the world we must tackle the gender inequality which is so detrimental to social justice and social cohesion.

It recognises as we must all, the great social and human cost of gender- based violence and the barrier it creates to the securing of a world that is equal, just and sustainable. Indeed, violence against women and girls is one of the driving factors for gender inequality in Ireland.

I am so glad, therefore, to have this opportunity to commend all those of you here this afternoon for the profound spirit of shared humanity, the real effective citizenship and empathy, that has prompted you to support and advocate for fellow citizens whose lives have become defined by fear, injustice and distress.

In a 2014 study entitled “Violence against women: an EU-wide survey”, the European Union’s Fundamental Rights Agency (FRA) reported that 14% of women in Ireland have experienced physical violence by a partner since the age of 15, and that more than a third of them have experienced psychological violence.

What you do not only makes a profound difference to the lives of many individuals and their families, but also to the bringing into existence the crafting of the Ireland we so dearly wish to achieve, not just for this, but for future generations – for the women, and also for the men of today and for their daughters and sons and for their grandchildren.
This week we received the very positive news that the Government is to establish a new Citizens' Assembly to examine and make recommendations on the issue of gender equality. That is an important recognition that, despite the significant progress that has been made towards the achievement of full equality for females in our society, there are still many gaps, many challenges to be overcome.

There has, I know, been a steady increase in the number of women helped by your various organisations. This underlines the prevalence of gender-based abuse in our society and the many people, including children, who regularly experience or witness brutality and aggression in their own homes.  It also, however, indicates that violence inside the home is, however late, now progressively getting the levels of public recognition it deserves, encouraging increasing numbers of victims to seek assistance, and to make the decision to no longer suffer quietly behind closed doors.

When those victims do find the courage to remove themselves from abusive situations it is to your organisations they so often turn for support in securing emergency accommodation and taking those first and most crucial steps on the difficult journey away from fear and violence and back to a normal life.

Through your generous work, victims of violence can begin to not only stop feeling afraid, but to start living again - empowered to make decisions about their future and the future of their children; empowered to pursue their legal rights, to earn their own money, find their own home, make new friends, and to lead the normal and fulfilling lives to which they are entitled.

Domestic violence is an outright negation of the dignity and the rights of its victims. Our collective journey towards true democracy, towards an Ireland defined by equality and a spirit of shared humanity will never be complete if those abuses of the gravest sort are tolerated, or if they are ignored or evaded, if silence is allowed to prevail around them.

This is why I am so delighted to have this opportunity to pay tribute to so many organisations and groups across Ireland who are committed to speaking up against domestic violence and to supporting women, men and children in breaking free from a world in which they are denied freedom, dignity and peace of mind.

Mar sin, ba mhaith liom buíochas a rá libh go léir as ucht an obair thábhachtach a dhéanann sibh, agus as ucht an dlúthpháirtíocht a chothaíonn sibh leis na ndaoine inár sochaí atá ag fulaingt de réir mí-úsáid chorpartha agus síceolaíochta. Tá fáilte libh go léir anseo inniu.
[So, I thank you for the important work you do and for the many generous ways you walk in solidarity with those in our society who suffer from emotional and physical abuse. You are most welcome here this afternoon.]

Before I conclude, I would also like to thank our superb MC this afternoon, Blathnáid Ní Chofaigh and our entertainers Denis Scully and Leo Osio, the Army No.1 Band, Colm Ó hArgáin, the Atkinson Family, Erica Cody, The Swing Cats, and Ailbhe Reddy.

Thank you to the staff here at the Áras for your hard work and good humour – and special thanks to OPW and our wonderful household team, not only for their wonderful treats, but for their kindness and ever cheerful disposition too; all things which contribute in no small part to making this garden party a very special event for you.

May I thank the Dublin Transport Museum for the loan of Jim Larkin’s tram and the Dublin Bus.

May I make a special thank you to, once again, Dee Rogers, and his crew for the superb sound he has made possible in facilitating our performers and musicians.

Thank you to our friends in St. John of God’s, the Gardaí and our Civil Defence colleagues, the tour guides and all who have worked so hard to make today such a joyful and happy occasion for us all. 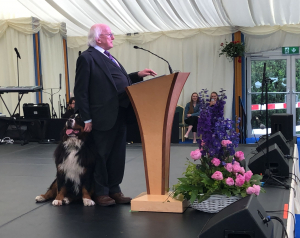