Address by President Higgins to the Fórsa Annual Conference: ‘COVID-19 and the Challenges of Work’

The task now at hand is to create a society that is more equal, one in which all work is valued, and all jobs are decent, fulfilling and secure, together with adequate social protection.

It was a great honour to speak at the historic first National Conference of Fórsa in May 2018. I welcome the invitation to speak to you again in 2020 in the midst of a pandemic to which your response has been one of solidarity and generosity.

So, may I thank Ann McGee and Kevin Callinan, Fórsa President and General-Secretary, for the invitation to address you today at your annual conference, delegates from over 250 Fórsa branches, along with members of your National Executive Committee.

Fórsa represents such a great achievement. The establishment of Fórsa represented the conclusion of much dedicated labour, negotiation, and necessary compromise to create from three unions what is a stronger and larger union – the second-largest in the country. That this was done in a spirit of solidarity and comradeship towards a common purpose laid a great foundation for the future, a result we are experiencing, and not only within the union but in Irish society.

Fórsa is, of course, part of the long and proud tradition that the Irish labour movement constitutes, a movement that has endured relentless struggles to secure human rights in often epic, hard-fought battles, a movement inextricably interlinked in our nation’s struggle for independence or giving a lead in opposition to the waste of human life that is war.

Too rarely it is asked to what level would society have sank without such a movement, one that secures and protects the irreducible right to dignity in the workplace and in society. Now Unions and Union members must have a new role as the best source of new forms of socially just, sustainable, ecologically responsible forms of economy and society.

I wish to acknowledge all Fórsa staff and its more than 80,000 members for their contributions during the COVID-19 pandemic, both as public servants and as active and caring union representatives.

Fórsa members work in diverse professions, occupations, grades and work settings, and their employment-related experience of the public health crisis has varied accordingly, with many thousands continuing to attend workplaces to maintain essential services, such as health and social care professionals, staff in social protection and other civil service departments, local authority workers, and staff in telecoms and postal services. Many more have quickly adjusted to working remotely, while others have depended on State income supports, and have experienced wage reductions. Regrettably, some members have faced the prospect of lay-offs and redundancy.

Your conference is taking place as we continue to face the challenge of dealing with a pandemic that is having such devastating personal, social and economic consequences. However, out of such a crisis we are presented with perhaps a once-in-a-generation opportunity to do things better, to embrace and bring to fruition a new paradigm of existence with each other, in relation to work and living, and with the world itself; a renewed and healthier connection of society, economy and ecology.

The pandemic provides an opportunity to rethink the connections between climate neutrality, a sustainable economy, social welfare and labour itself. Trade Unions giving leadership in breaking new ground is not new.

When I list these challenges, and of ones previously in our history, I think of what insignificant attention has been given to the trade union movement’s contribution in giving leadership in urgent and democratic change. The movement has always produced brave, heroic men and women, such as Jemmy Hope, a Presbyterian from County Antrim, who organised the Protestant workers of the Liberties in eighteenth-century Dublin to combine their efforts not only in defence of the dignity of labour, but to demand a non-sectarian, egalitarian republic; Helena Molony, actress, veteran of 1916, and suffragette, who was elected the president of the Irish Trade Union Congress in 1937; James Connolly, whose thoughts and actions still inspire and guide millions today; and not forgetting, in our town time, Mary Manning and her comrades, who took a stand against apartheid when so many others were averting their gaze.

I welcome the fact that at your conference this year you are addressing the theme of work in the context of COVID-19. The pandemic has forced a return to fundamental questions which we as a society ignore at our peril. What are the essential tasks and needs of a society as we live together? How did it come to be that so little value was placed on essential work and the contribution of essential workers? The consequences of privileging those remunerated in a financialised global economy over those who worked in the provision of universal basic services, or indeed in what must be accepted as the real economy, have been laid bare in the regressive outcomes since 2008 in particular.

The task now at hand is to create a society that is more equal, one in which all work is valued, and all jobs are decent, fulfilling and secure, together with adequate social protection. This task is far from an easy undertaking given current geopolitics and the recent, if now thankfully fading, fixation with a neoliberalism that was not open to critique in terms of assumptions, practices or consequences.

So much is possible, and can be made possible now.

Role of the State

The COVID-19 pandemic has proven irrefutably how the paradigm in which our economies have operated for four decades has forced a shrinking of the space of the State, undervalued frontline workers and those providing essential services across the economy. From this demonstrably failed, disconnected model of economy, we must liberate ourselves, replace it by making a new balance between economy, ecology, society and culture.

We are all responsible for what we know and choose to ignore, from which we avert our gaze.

How hugely regrettable it would be, what a lost opportunity, if, through some form of evasion or moral cowardice, we as a society were to continue to disregard the efforts of these women and men, our essential workers, that, having paid them fitting tribute for putting themselves and their families at risk for us all, we were to settle for reverting to where we were before the crisis.

Tragically, instead of recognising the inequities of current systems, some governments and employers across the globe have used the crisis in an insidious and opportunistic way to restrict further the rights of working people through limiting collective bargaining, disrupting the right to strike, excluding workers from participation in the economy through their unions, and impeding even the registration of unions as part of civil society.

The pandemic has clearly shown, too, how highly mobile workers who frequently move within, or in and out of, the European Union are irreplaceable during a public health crisis, yet they often remain the least protected. We continue to witness increases in precarious employment, contract working, and an ongoing casualisation of labour, with new and emerging trends in work practices that are often deemed ‘innovations’ insofar as they provide new means to maximise profits for employers, but in their practical delivery reveal the ongoing erosion of employees’ hard-won labour rights.

The trend towards digitalisation continues, and while such a trend need not be wholly negative if offered within a social-economic model, we see how online workers often are not covered by the most basic employment law or collective agreements, all rationalised in the name of efficiency, flexibility, productivity.

Our new circumstances require that the spirit of solidarity be deepened and extended further and further, to encompass not only those who labour and work, whether in new conditions or old, but also those who are excluded and left out.

As public and civil servants, and as workers in strategic sectors of the economy, you are at the very centre of some of the great challenges we face, such as mitigating climate change, welcoming and managing migration, and ensuring sustainable development.

The economist Mariana Mazzucato has written of the importance of the entrepreneurial State in economic development and of how economic success is a result of public investments in innovation and technology, rather than a result of a small State and free market doctrine that often receives credit for a country’s strong economy.

As we confront these challenges, we will require a more activist, and a more democratic, State, one that can plan, co-ordinate, manage and intervene when necessary in an open and transparent manner, placing the needs and welfare of its citizens at its very heart. Competence in decision-making at macro and micro levels of economy and society, the fullest forms of participation, must be achieved by a movement for economic literacy of a new kind that will empower every worker.

To conclude, May I suggest that the COVID-19 pandemic can be best viewed as giving us a means for us all to rediscover the significance of the social, recover or discover the experience of life beyond an immiserating individualism, to make society more just and inclusive. Our multiple, interlinked economic, social and democratic contemporary crises, manifesting on the European street as lost social cohesion, show that we need a new concept to value social life and reduce the influence of the hegemony of a marketised economic discourse.

Sociology and economics need to be recovered as to their moral purpose. Both must be enabled to become again moral and political social sciences, such as Polanyi saw, and provide sources of resonance in our new paradigm of existence – to fix our broken relationship with the world, to paraphrase Professor Hartmut Rosa.

Fórsa, as a public sector trade union, has a crucial role to play in ensuring that Governments’ labour policies are adequate, forward-looking, inclusive, evidence-based, ethical and equitable, in helping to bring about a vision of a fairer society and economy, one that promotes decency in the labour market, inclusivity and sustainability in their many forms, and that works for an end to any crippling authoritarian hierarchy or invocations of class or privilege that impedes or obstructs good, decent, effective work.

You and your 80,000 members are well-positioned to play a transformative role in tackling the adverse trends to which I have referred by exposing and preventing such evidently inequitable practices, practices that are pervasive in too many of the sectors in which essential workers continued to perform their duties during the recent crisis and, thus, enabled society to continue to function at some basic level. The battle for decent work and all it entails continues to be one of the defining struggles of our times.

Let us all commit to ongoing activism in what is an international campaign for decent work, to playing our part in the creation of a society that removes the hurdles standing between so many of our people and their personal and social fulfilment. Let us commit to valuing all of those heroic workers, wherever they may be, who risk their lives and their security to support us, defending their rights, in these new circumstances, as the founders of the trade union movement did over a century ago. Let us play our part together in advocating a vital transition to a renewed political economy of hope, of a sustainable, just, inclusive future on our vulnerable Planet Earth. 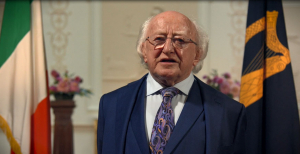