It is my great pleasure to be here with you all this afternoon. May I thank Pamela de Brí for inviting me to officially launch ‘Little Stories Little Prints’ Exhibition here at the Galway City Museum and all of you for welcoming me so generously.

I got great pleasure in going through the ‘Little Stories Little Prints’ little book that came into existence to accompany this wonderful ‘very big’ exhibition.

I found the whole presentation delightful, what a splendid visual arts offering has come into existence to commemorate 1916 in this 2016 year of great centenary celebrations.

I think the whole year of events as part of the remembering and reflecting on the decades of crucial events that led up to the foundation of our Independent State has given us knowledge and possession of so much information never so fully available to us over the past decades.

It has been a great and emancipation experience to have become involved following and participating in the various events.

We had the 1913 Lock Out commemoration in which we got to know of the social history of class divide Dublin and the crushing of the workers’ ITGW Union. The class war of the Lock Out between the tenement workers under the leadership of Jim Larkin and James Connolly, as they tried for better working conditions, pitted against the might of William Martin Murphy and the employers of Dublin who locked them out of work and starved them to break their union.

This led to James Connolly and the Irish Citizens Army coming to the conviction that only through independence could they get the rights and conditions that workers in England and Europe were entitled to. The Irish Volunteers founded to support and the delivery of Home Rule had divided on the call by the Irish Parliamentary Nationalist Party Leader John Redmond to support the British in World War I in 1914. About 105,000 supported Redmonds call and they became known as the National Volunteers. The 12,000 Irish Volunteers who resisted the call contained in their ranks the Secret Society of the Irish Republican Brotherhood who were committed to achieving independence by Revolution. These included 6 of the 7 signatories of the Proclamation.

In January 1916, the seventh signatory, James Connolly of the Irish Citizen Army, joined with them and the date for the Insurrection was set for Easter.

The Commemoration for 1916 has been so deep, so extensive and the amount of research undertaken has resulted in a huge level of participation by the people of Ireland. There has been the publication of books, making of documentaries, holding of exhibitions and concerts as well as an extensive programme of official State organised events.

The participation by schools at all levels and in all kinds of projects is one evidence of enthusiasm shown by people in getting to know and celebrating their history.

The many sided versions of events that make up the story of their country. It has been marked by good will and understanding and inclusiveness. It was particularly satisfactory and gratifying to find that the part of the narrative particularly the part played by women, Cumman na mBan and the Irish Citizens Army came to be acknowledged and highlighted.

The initiatives that led to the realisation of this particular project were quite inspired. It has produced a body of work in this exhibition that is exciting and really quite delightful. The fact that 49 artists participated has lead to a wealth of great and varied images. At the time in 1916 there was not any consensus as to the work of the insurrection but there was no way it could be ignored or that it did not affect people’s lives.

I get a sense that in this project that all participating artists were committed to getting to know as much as they could about the events and get insights and an inspiration for what they might focus in on or what image might come to them. But certainly the variety of choices made on which particular event or personality they would choose or what their view of the Rising would be, varied considerably. There is the personal connection through some family involvement and there is admiration for particular participants or engagement with particular events.

Little Stories Little Prints - they are all beautiful pieces of artwork in themselves but their importance really is in how they tie into people’s images of the Easer Rising and how each of them fills in another little piece of jigsaw. I like the way the images connect with each other for instance, there are lots of great images inspired by the barricades that were erected. We have the image of the horse leading to the sad story of the poor man whose cart was commandeered for a barricade and ignoring the warnings he went to retrieve his cart and lost his life - but in the image, there was the horse being left bewildered without his cart.

We have the image of the terrible beauty of a barricade constructed from great rolls of papers from the Irish Times going up in flames and spreading across the street with disastrous consequences and in the sky above glorious fireworks display having been set off by children looting from a nearby shop. Apparently the revolutionaries on top of the GPO where terrified that the Catherine Wheel fireworks were going to land on the GPO and set off their supply of ammunition.

Many of the images the women ensure that they are never again to be airbrushed out of history. They all call on us to pause and reflect on the courage, the suffering and the strange happenings thrown up in the action. There is the lovely etching of the moment of surrender, showing Elizabeth Farrell being reinstated beside Padraig Pearse at the surrender. We have great images depicting the images of the role of women in the Rising, often with great humour. We have Dr. Kathleen Lynn flying over the high locked gate at City Hall to join the Irish Citizen Army post and being amazed at herself in this lovely quote ‘I don’t know how I managed to do it’. We have the image of the ‘Mad Cap’ Margaret Skinnider with everything ‘under her hat’. We have the amusing picture of a woman flying by on her bike to get her brother rescued – I can’t resist images of bikes -. 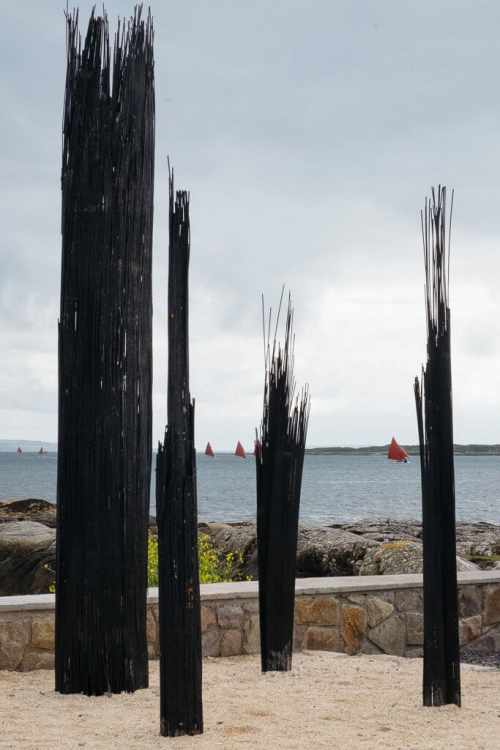 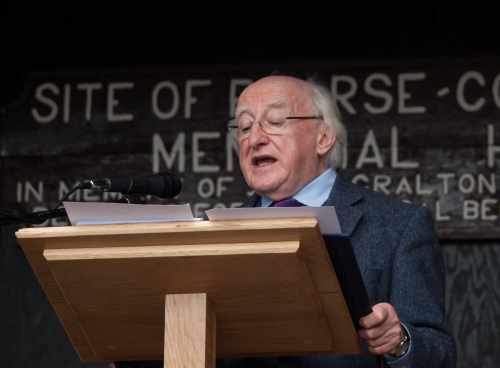