Good afternoon everyone.  I am very happy to be here with all of you Soroptimist International Women.   Thank you Mary Kerr for the kind invitation you sent me. I hope your morning’s deliberations were enjoyable and successful.

Founded out of a passionate desire of women to help and co-operate with other women, it has evolved, moving on in line with changes in the concerns of women and girls of different times, and the needs and challenges they were facing.

The fact that women in Soroptimist International have such a developed comprehensive view of the problems of women and girls, and that their concern is both local and global, they can make a great contribution and have great influence on policy and practice.

It is a joy to know that your mission is to make gender equality a reality and that your work is to have every woman and girl have access to education, economic empowerment, and live a life free of violence.

The breath of your advocacy is admirable, including as it does, education, learning and human rights, social development, sustainable development, an end to violence against women and the environment.

I am absolutely delighted that Soroptomist International is so aligned with the United Nations – with UN Women and the Sustainable Development Goals.

The signing-up by 200 countries to the United Nations Sustainable Development Goals, the 17 commandments for our time and the future that will ensure the survival of the planet, the ending of poverty, and the flourishing of every citizen on our fragile planet, and the legally-binding commitment to climate justice is such a wonderful achievement for humanity.  For the first time ever the whole world has the same agenda – one that can ensure that no-one is left behind.

The promoting of the achievement of the goals is such a powerful motivating force in the world.  It is so energising for all generations.

The emancipation of women is a vital part of 5 of the goals.

There is an overwhelming and persistent global injustice against women.  Oxfam Ireland has stated that gender inequality lies at the heart of the gap between the richest and poorest people in the world.  Gender-based violence is very much a global issue.  It is an issue in every country, but is at a daunting scale in many countries.  It takes many forms – be it domestic violence, rape, sexual harassment, sexual violence during armed conflict, in refugee camps, forced marriages, trafficking of women, forced prostitution – the list is sadly very long and FGM – Female Genital Mutilation – sadly remains a huge problem.

The world is dealing with two great crises at the moment.  The new crisis of the Covid-19 pandemic, and the ongoing crisis of the climate change disaster that is endangering the very existence of life on our vulnerable planet.

As the reality of climate change and human induced earth warming can no longer be denied, the world leaders have recognised that the escalation of its effects are being manifested in ever greater floods, more frequent droughts and fires, and in desertification which effect the poorest and the least responsible for global warming.  It is acknowledged that there is a crisis for the planet.  There is a recognition that the economic models that encouraged short-term gratification to the detriment of the future must not continue to be tolerated.  For instance 2,153 billionaires own more wealth than 4.6 billion people – 60% of the planet’s population.

The fight to combat climate change has to be reconciled to the right to development claimed by developing countries.  The narrow theory of interests that has motivated the policies of so many of our nations, and that are at the root of so much inequality, and conflict must change.  Unfair trade, tied development aid, and demands that are impossible for debt repayment must change.

There is now a fairly general agreement amongst many world leaders and concerned economists that the neo-liberal system of the last four decades leading to deregulation, an unaccountable corporate capitalism, and unregulated free trade has led to systemic failure and that things must change, there must be a new multilateralism.  However, there is much fine work being done at global level, a lot of consultation between convenors and stakeholders.  From these UNCTAD – The United Nations Conference on Trade and Development has produced a document outlining the history and the way forward in the Geneva Principles for a Global Green New Deal.

UNCTAD’s book – A New Multilateralism for Shared Prosperity - can be downloaded free with its companion document – UNCTAD Trade and Development Report 2019 – Financing a Global Green New Deal. This is a very valuable and hopeful development.

Of course, the present and immediate crisis with which we are struggling is, the catastrophe of Covid-19.

Whether it be at personal or collective level our systems were shocked and remain shocked to our core.  Most of us had never even heard of a pandemic or had any idea of what a pandemic meant.  We were forced to realise what an awful challenge it was and what a sense of unreality it has created for us, and what suffering it has brought.  We will be forever in awe and grateful to the frontline heroes who bore the brunt of the battle and indeed continue to do so despite the burden of care they carry, and indeed suffered for.  We are grateful to you who may have been in the second line of defence as volunteers and who did such great service.

World organisations, governments, and others pooled the enormous monies that were needed to finance the science for the research and development cost, needed, by the vaccine manufacturers that would try to develop an effective vaccine.

They set up an initiative called ‘COVAX’ or the COVAX Facility.  This was co-led by CEPI – Coalition of Epidemic Preparedness Innovation; GAVI – a financing mechanism for pooling the buying power of participating economies.  Other participants were the WHO, UNICEF, Governments, The World Bank, and others.

It is the only global initiative that is working with governments and manufacturers to ensure Covid-19 vaccines are available worldwide to both higher income and lower income countries.

For as long as the virus is not brought to an end all over the globe, no country can be sure it will remain safe.  It is acknowledged by the experts and through science, that until everyone is safe, no-one is safe.  The majority of the world population needs to be immunised in order to defeat the virus.  The Director-General of the World Health Organisation, Dr. Ghebreyesus has said that the inequitable distribution of the vaccines between the rich and poor countries will prolong the pandemic.  He says the world is on the brink of a catastrophic moral failure and the price will be paid for in lives and livelihoods that will be lost, if people go for a selfish, self-defeatist nationalism.

Pope Francis is among the world leaders who have spoken about the lack of solidarity, and the immorality of people concentrating on getting supplies of the vaccines for their own country, and even hoarding vaccines.  They, are causing vaccine nationalism that can lead to serious political conflict. By their actions they are endangering the necessary international co-operation that is needed to work towards the elimination of the virus.

The guidance from the WHO and the Scientific Concerned is that the vaccination of the frontline workers, medical aid, the most vulnerable part of the older generation, and those with underlying severe health conditions must be vaccinated first to slow the Covid spread.

The provision of the supply to 20% of each country’s population needs to be honoured. The COVAX Facility has to reach its ethical objective.

The fact is that the only way to achieve Zero Covid-19 is by ensuring that there are enough vaccines at accessible prices to vaccinate the whole global population of 7.8 billion.  This is the top priority for the WHO and every country.  In order for the required supply to be manufactured and made possible there needs to be a temporary ‘waiver’ on certain aspects of the Trade-Related Intellectual Property Rights (TRIPS) agreement – that is the international agreement on patents and other intellectual property.  This is how the AIDs and other viruses were eventually brought under control.

The manufacturer would share their knowledge, and the profit motive for keeping the vaccines excessively high would be removed.  The poorer countries would have the information and have the know-how to produce their own vaccines and the cost would be affordable.

Now with 180 Governments involved – representing about 90% of the global population the COVAX Facility initially hopes to make 2 billion doses of the Covid-19 vaccines available by the end of 2021.

Last May at the United Nations World Health Organisation, South Africa, India and 40 low and middle income countries proposed that as the only way to end the pandemic was to open production so that vaccines, tests and treatment are available to all.  This can happen if all the companies who can produce vaccines have access to vaccine technology, the know-how, and the intellectual property.  The World Health Organisation launched C-TAP - the Covid-19 Technology Access Pool - to act as a one-stop-shop for pooling all data, know-how, biological material and intellectual property, and then licence production and technology transfer to other potential producers.

So far the pharmaceutical manufacturers are protecting the profits and keeping their monopoly and have not joined the World Health Organisation Covid 19 Technology Access Pool and the proposal by countries worldwide has been blocked by some rich countries.   The governments of these rich manufacturing countries can put pressure on the manufacturers to join. Governments need to be put under pressure by their populations to join. It was public money that funded the research for the vaccines.

This becomes ever more urgent as new mutations mean that even current vaccines may not remain effective.

Many alliances of international organisations, the World Health Organisation, NGOs and political leaders around the world are campaigning to have this come about. These efforts are worthy of the support of all of us. As Dr. Ghebreyesus and Dr. Mike Ryan keep reminding us – “until everyone is safe, no-one is safe”.

For now, we must observe the rules, keep socially distant and wash our hands.  Keep safe, and keep everyone within your sphere safe.  Love, support and help in whatever way you can and mind your health and keep fit. 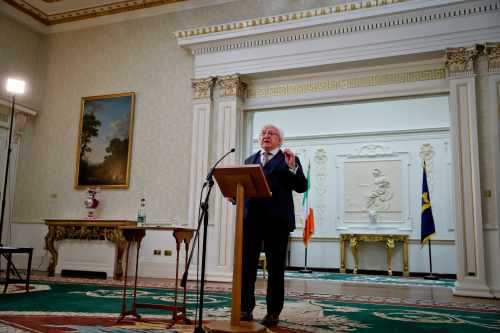 President marks International Day of Women and Girls in Science 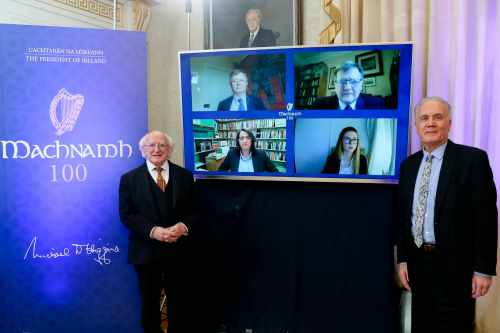