I am delighted to have the opportunity of participating in the Public Participation Network’s South Dublin AGM, particularly in this unprecedented year.  It is so appropriate that you are taking as your theme of the meeting this year the acknowledgement and thanking of community groups for their Covid response.

The many acts of selfless kindness, the new connections forged between neighbours, the inspiring spirit of solidarity that grew and flourished in towns, villages and suburbs were and continue to be a shining light during this dark and demanding chapter in our country’s history. Congratulations and thanks to the South Dublin Network for its great response that was so widespread and extended to every part of this great big constituency.

Recent months have served as an important proof, if proof indeed were ever needed, that the true foundations for a caring and ethical society can be traced back to the quality of the communities that we create, and in which we live together - communities that work together – that recognise the needs of all their members.

The pandemic made us look afresh at ourselves and to see ourselves as part of a collective of citizens caught in the middle of a new experience, and as a result brought a consciousness that we are all part of one group and that our behaviour matters. That we were better for the fact that we were not just behaving selfishly or self-centredly, but that we were accepting that we must be accountable to every other person of the group for their safety and their well-being.

I think people in a strange way welcomed that awareness of responsibility, the knowledge that what they did mattered, and had consequences not only for themselves but others.

The wonderful thing was how gloriously people rose to the challenge, and what a change of consciousness and values it brought about.  Every person came to see how vulnerable and fragile the very existence of humanity is and with what care it must be valued, and given care.

It was such a shock to the whole system and to all of our individual systems to come to realise that what challenged us was a pandemic.  Most of us had never even heard the word before or had an idea as to what a pandemic meant.

The alarm that was raised and our going on the alert of that first lockdown caused such a feeling of unreality that it stays with us and has not gone away.  We turned to the State, the government for guidance, for a plan. We were forced to face some fundamental questions as to what are essential structures, what are the basic essential tasks, what is essential work, who are essential workers.

We are so privileged to live in a democracy where the organs of the State and some 50,000 health and public services workers took over and stood in the front line of action and danger.  Then we had the 2nd line like yourselves that volunteered and organised in your organisations and communities. We are still staggering but we continue to be in awe and admiration of the heroines and heroes of that front and 2nd line response.

Many of us could only offer our support by keeping the rules and publicly applauding the workers. It will remain one of the most moving memories of the pandemic, the people lighting their candles and clapping their thanks and their encouragement. They were the rock we all clung to. Never before did we see so clearly how necessary it is for society to hang together.

It was also made very clear that a whole new lot of changes must take place and that priority must be given to the Caring Institutions and to the Universal Basic Services, that the very future of the planet depends on these being brought into being by an intelligent, supportive, caring public.  The book “The Case for Universal Basic Services” by Anna Coote is very valuable as a source on all this, as indeed is “Heat, Greed and Human Need” by Ian Gough.   Anna Coote is head of Social Policy for the New Economics Foundation & Commerce with the UK Sustainable Development Commission.

We cannot ignore what challenges us.  We cannot be in a state of unpreparedness for the challenges that are now here with us, or that the world institutions, governments, and science have informed us lie ahead.

The changed planet that climate change is causing was evident to us even before the catastrophe of the pandemic.  Already desertification, floods and conflicts caused by drought, famine, and food shortages were causing massive displacement of people with millions of refugees and migrants forced to move across the globe.

When I welcomed the launch of the Public Participation Network in Dec 2015, I spoke of how timely it was that it was coming into existence and the great and essential part it would be necessary for it to play, if the planet and humanity was to survive.

I spoke of how the best hope for the world, the United Nations, after decades of work had the great achievement of 200 countries of the world committing to the 17 Sustainable Development Goals and the 169 targets that could ensure the survival of the planet, the ending of poverty, and the flourishing of every citizen of our fragile planet.  In November 2015, 169 countries had pledged their support and financial commitment to climate justice to ensure that the Sustainable Development Goals could be achieved.

This was, and is, such a wonderful achievement for humanity.  For the first time ever the whole world has the same agenda- one that can ensure no-one is left behind.

The success of all this depends on all institutions playing their part. The Sustainable Development Goals are the seventeen commandments for this time and the future. We already know of the great work of the United Nations, its different bodies, World Health Organisation, UNICEF etc. All the governments at International, National and Local level, all NGO’s and civil society – from top down and bottom up – everybody must come to meet their individual, collective, national and international commitments.

The Sustainable Development Goals came into being on 1st January 2016 and five years later much has been achieved though this may not be universally known.  For example, new positive legislation in the human rights and all other areas has been enacted.

Reporting of the compliance with their commitments, by signatory members of the United Nations is so important.  The UN every year, from September to December in New York, holds its sessions at which every country comes and gives an account of its progress.

There have, of course, been set-backs, pledges not met, but the work is ongoing. The fact that President Trump withdrew the US from the Climate Change pledge made by President Obama, was a great blow but President- Elect Joe Biden has already publicly promised that as President he will immediately recommit the US to Climate Justice.

This is where your work in Public Participation Network is so essential and so valuable, as through your work, in all of your different organisations at different levels and in your plenary sessions, your work is put through and passes the test of it furthering the objectives of the Sustainable Development Goals. Objectives in relation to a sustainable environment, of a renewed and healthier connection of Society, Economy, Ecology and Culture. The prioritising of the essential tasks and needs of society as we live together.

Our new circumstances require that this renewed spirit of equality and solidarity be deepened further and further so that none are excluded or left out; that we create a society that has as its foundation the third Sustainable Development Goal of “Good Health and Well-being”.  This could be achieved, as I have said, by there being Universal Basic Services provided in the structure of health, housing, education, infrastructure, guaranteeing that work is decent, fulfilling and secure and that it has adequate basic protections, where human rights, and human rights for women, all gender rights are respected and where culture is promoted and valued, indeed especially a culture of non-violence, where the practice of gender and domestic violence are never tolerated.

I feel sure that you will get more and more support for your work in the public space as the Sustainable Development Goals are now part of children’s understanding of the world and of their understanding of ecology and social environment.  Because of what they know and are concerned about, they are enthusiastic about the part that they must play.

The response of citizens, and the behaviour that accompanied it showed us how wonderfully people can respond in togetherness and solidarity and how proud they can all be of their achievement.

I am certain that the efforts made have been character building, and will inspire us to even greater efforts as individuals, responding with creativity together for a great future.

I know that the Public Participation Network has the power and the ability to be a great force at Civil Society level, one that moves things forward, that becomes a powerful influence and support for all the best forces that will be at work above it.

It is a wonderful privilege to be playing an active part in this historical time of change. I wish you joy and success and courage in all your endeavours.

And, finally, I wish you a very happy Christmas. 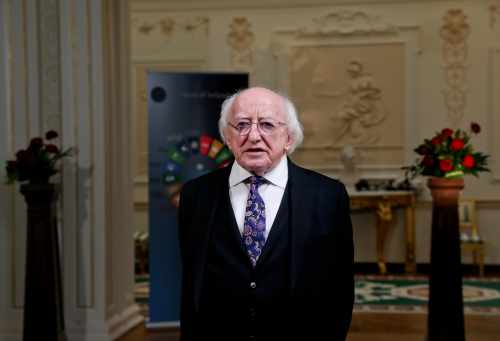