Speech at the 50th Anniversary Conference of PACE

I have a long-standing interest in the issue of prisoner support and in helping re-integration into society of men and women who have been incarcerated. I served on the McBride Commission on Prisons.

I submitted to the Whitaker Commission. Indeed, for many years I taught a sociology module on the history and practice of prisons in NUI Galway.

As President of Ireland, I have made, and continue to make, visits to prisons around the country, meeting inmates and staff alike. Several years ago, I requested that Gaisce (the President’s Award) would place a particular emphasis on engaging with disadvantaged young men and women, including prisoners, and those identified as being at risk of offending.

I was anxious to extend the reach of Gaisce to where the contribution might be most influential, where it might help blunt the effects of exclusion and structural inequality. I am encouraged by what I have seen since then and, to date, over 190 Gaisce Awards have been achieved across the prison estate. Therefore, I have long been aware of, and applaud, the fantastic work undertaken by the PACE team.

We are here this morning because, in 1969, a small group of dedicated volunteers who were visiting men in Mountjoy prison recognised the significant challenges facing them following release from prison. These challenges were broad, but in many cases included the basic need for a place to live. This was far from a glamorous cause or one which, at the time, would have attracted widespread public support. Nonetheless, this dedicated group of volunteers felt that prisoners and persons released from prison were largely overlooked by wider society, and so they stepped up to establish the PACE organisation and address a real challenge.

Over the past 50 years, PACE has grown in size and strength and now provides a wide variety of services to men and women coming from prison. The ultimate aim of the PACE project is to provide an opportunity for people to turn their lives around and to break the cycle of offending and re-offending. This can dramatically improve the life experience of a released prisoner, and it can have a similarly positive impact on society generally, through lessening the likelihood of future offending, as well as reducing social exclusion and structural inequality.

I think it is fair to say that the need for PACE is unfortunately still a great one. We know that levels of educational attainment and literacy are both low amongst people who end up in prison. The majority will have never sat a State examination. When a person emerges from prison, their sentence may be served but, on release, a conviction adds further challenges in terms of stigma, personal and social prospects.

I am thinking of matters that many in society take for granted, in particular: accommodation – having a safe place to call home; education – developing literacy and skills that bring confidence and the ability to navigate the world around us; and employment – a source of income and self-esteem and, in some cases, necessary supports to prevent reoffending.

[It is no coincidence that PACE offers services to assist in each of these areas. It provides accommodation services to residents, a broad range of training opportunities as well as social enterprise activities, which I will speak about again shortly.]

I mentioned that the work that PACE took on when it was established was not necessarily work which would have been prioritised by the general public. I am reminded of this when I think of one of the most significant changes which has taken place in PACE since my predecessor spoke to this conference a decade ago. I am referring to the fact that, since 2011, PACE has been developing a range of supports for people with sexual convictions through their Prevention Services.

Through the Safer Lives Treatment programme, the Foothold Floating Support Service and the Circles of Support and Accountability, PACE staff and volunteers work together with people with convictions for harmful sexual behaviour, with the aim of reducing further harm.

This is crucial work. I know this will be featured later in the conference programme, and I will be interested to learn from the discussion.

The term ‘social enterprise’ was certainly not in circulation 50 years ago when PACE was established. However, I feel this aspect of its work is particularly noteworthy.

As some of you may know, a recent Solas survey found that more than 60% of respondents who were employers indicated that they would be willing to hire someone who had served time in prison. While most encouraging, the experience of many former prisoners is different to the findings of that survey.

Those experiences suggest that significant challenges are faced by persons seeking employment following time in prison. Anecdotal evidence suggests that, despite completing training courses and achieving qualifications through hard work and commitment, many persons still have difficulty finding employment following a conviction, even years after having served their sentence.

I applaud PACE for having recognised these obstacles and responding, not only through developing its training services, but also through the introduction of social enterprise activities to address this.

As you know, social enterprise programmes combine a working business with opportunities for trainees to put into practice the new skills that they have learned and experience working in a standard work environment.

The only difference between social enterprises and conventional private enterprises is that any surplus is reinvested into the objective for which the social enterprise was established. This a marvellous model – each party providing and contributing according to their ability, for a shared purpose.

Some of the fruits of trainees’ labour can be seen here today, and indeed throughout Dublin, and demonstrate real craftsmanship. Developing a skill and, more importantly, being given the opportunity to utilise that skill, to build confidence and self-esteem and gain crucial workplace experience to assist on a person’s journey post-prison – this is all so commendable.

I have heard of the recent new venture by PACE to enter the coffee industry. I refer, of course to the opening of the wonderfully named “Mug Shot”, a mobile coffee unit based in the Four Courts. Mug Shot staff have completed training as baristas and should be in large demand in our cafes after gaining experience in the sector.

These are excellent examples of what can be achieved when we work together. And it is our duty to do so.

In different circumstances, any of us could find our lives turn out differently. The legal professional buying a coffee at the Mug Shot café could in other circumstances have instead found themselves on the other side of the counter, as an ex-prisoner.

No one can change their past, those chapters have been written – and this is very clear, too, in the theme for this conference, That’s my story, I can’t change it…” drawn from PACE’s research on the experiences of men serving a life sentence.

We all deserve the opportunity for a second chance and supports to overcome obstacles placed in our paths in order to shape our own future.

I note that the esteemed actor, Tommy O’Neill, will address the conference later today and share his personal experiences of prison with us and how that period of his life has shaped his journey along his life’s path, with all the twists and turns that he has met along the way. He and others who have similarly moved past their prison experience are an inspiration to us all – to those who are currently on that journey; and to those of us who can help.

As President, I would like to thank PACE for the invaluable work that they do. I would ask the Chief Executive, Dr Lisa Cuthbert, and Chairperson, John Corr, to accept my thanks, and indeed I wish to pay tribute to the entire dedicated team at PACE over the past five decades.

I would like to commend all those prisoners who take advantage of the services provided by PACE to improve their lives and start again. That takes courage and perseverance and should be recognised.

[I think that, at its core, the work of PACE focuses on assisting people to build a better future for themselves. All of us here today must play our part in giving support to those who need it and in advocating for others in wider society to do the same.]

Everyone makes mistakes. It is how we support each other to develop and grow from this that matters most. 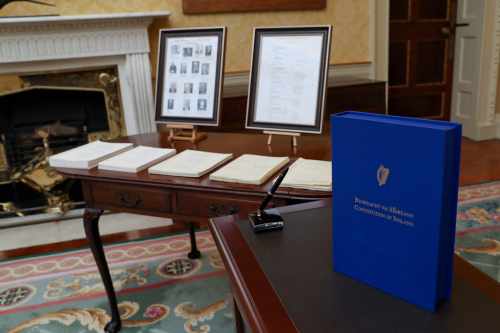