Is mór an pléisiúir dom a bheith anseo ar maidin.

It is a great pleasure to be here this morning.

Today I am very pleased, as Uachtarán na nEireann and as Supreme Commander of the Defence Forces to have the opportunity to thank and pay tribute on behalf of the Irish people to the 92nd and 93rd Army Cadet Class, for your remarkable work over the past year.
I thank you, in particular, for the key role that you played in the State’s commemorative programme during this important year, as the nation came together to mark the centenary of the Easter Rising.]

The great professionalism which you brought to:

These events, ceremonial and symbolic, which you helped execute, were an impressive and inspiring example of all that we, as a nation, can be proud of.
While these events were iconic moments in themselves, they also constitute a chapter in the history of Cadets’ participation in important events in our Nation’s story. It was a great pleasure to unveil the photograph of the commemorative events which captures for posterity those three most uplifting and inspiring occasions, a photograph which can be placed alongside the many other photographs that give testimony to the important role the Cadets have played during significant times of commemoration and celebration in Ireland.

It was also a pleasure to listen to a most interesting talk on the story of the Cadet School, and to be reminded of its long and rich history, of its deep roots in the period of Ireland’s struggle for Independence, and of its journey forward to present times.

The school has made a critical contribution to an independent Ireland; and, in the persons of the many cadets that have passed out of the School across the decades, it has contributed significantly to Irish and global society by the provision of leaders and humanitarians.

While there were times in the last decade when the reputation of Ireland was being called into question in a number of areas, there was indeed one area where Ireland’s reputation could always remain intact, and would continue to be enhanced, and that was in the contribution and reputation of our Defence Forces.

You are now part of the Cadet School’s history, and can be proud to follow in the footsteps of the many exemplary men and women who have gone before you. You do so at a time when humanity is faced with unprecedented challenges of a global kind – from climate change, the achievement of a just and sustainable development, global poverty, hunger, conflict – all leading too often to mass migration. As Officers of the Defence Forces you will play a critical role in protecting human rights; in providing the secure foundations of peace on which civil society, human rights and equality can flourish.

It is that human rights emphasis which defines the importance of the work of our Defence Forces overseas who are working to protect life, to secure communities and to build and maintain peace in many parts of the globe.

Today we have six hundred and sixty-one personnel from the Defence Forces serving across fifteen missions in fourteen countries and in the Mediterranean.  The role that the Defence Forces are undertaking in the humanitarian search and rescue tasks in the Mediterranean, week after week, has resulted in the recovery of over 15,000 migrants. We can be very grateful to the crew members of our Irish naval vessels for the critical role they have played in those operations. Not only did they save the lives of many men, women and children, but they also served as invaluable role models to all Irish citizens.

In the Lebanon, Ireland has resumed command of the mission and there are now 379 Irish soldiers based in UNIFIL.  In Syria, there are 129 Irish soldiers serving in a challenging and difficult mission.  Across Africa, we see Irish soldiers serving in Mali, the Congo, Western Sahara and in other missions in Europe, such as Bosnia and Kosovo.
This is a tremendous contribution and a tangible demonstration of our commitment to the pursuit of international peace and security.  While on State and Official visits abroad, I experience very strongly the response to the manner in which your undertakings and accomplishments are appreciated.

It is regularly emphasised, for me, how all these initiatives have contributed to forging Ireland’s good name on the world stage, and how they continue to inform the sympathy and respect our nation enjoys among the nations of the world. This is a moral heritage we must cherish; one that is valuable both in itself, and as an asset in our relationships with other nations.
It is a form of wisdom that draws on the institutional history of Óglaigh na hÉireann but above all on the character of those who serve in our name.
Members of the Defence Forces have also been involved in many critical tasks at home, such as air and sea rescue, bomb disposal and fishery protection, ensuring the security of our State and the well-being of its citizens.  Earlier this year the support the army gave to communities across the country who were dealing with the devastating effects of flooding underscored the important and positive contribution the Defence Forces so generously make to the lives of our citizens.

It is, I know, such a spirit of pro-active engagement and great will to make a positive difference that guided you to enroll here as cadets. A cadetship is a challenging road to choose; but one which involves the undertaking of a long and demanding journey. It is a journey which calls for determination, perseverance and effort from those who aspire to be future leaders and decision makers in Óglaigh na hÉireann, inspirational citizens who will help to create a more equal and just world.

This year marks the largest single Cadet intake due to complete its training as one group in the history of the State.  That you were amongst those chosen to attend the Cadet school is a significant statement of the confidence Óglaigh na hÉireann has in your potential to be inspiring leaders and dedicated and courageous Officers. May I commend and congratulate you all on that achievement.

As part of the EU, Ireland continues to establish new relationships bilaterally, with other EU Member States. I am delighted to welcome our Cadets from Malta, who are here today and with whom we have established a strong relationship in the area of security and defence. I know that your inclusion has added a new and valued dimension to the Army Cadet class.

Throughout this year we have, of course, not only been commemorating the centenary of 1916, but also reflecting on the generous vision, moral courage and original thinking that defined the pro-active ‘revolutionary generation’ who dreamt, and sought to achieve, a new and better Ireland. We have recalled, with pride, our history as a nation rooted in courage, vision and a profound spirit of generous humanity.

Today, we must remember that active citizenship will always call us to face challenges and obstacles with original thinking, great humanity, flexibility, and moral courage, if we are to play our part in the creation of a more equal society and a better world.  While all of you here today will be required, in the years to come, to show courage, dedication and professionalism in the line of duty, I know that you have already demonstrated those qualities during your time here in the Cadet School and I am confident you will continue to do so throughout your military careers.

[May I express my gratitude to those who have served Ireland, and say a special thank you to those who look after their comrades in periods of difficulty after serving their country in the pursuit of peace in the world. Last week, in Dublin, I visited Brú na bhFiann, the residence for homeless former members of the Defence Forces and I was moved by the spirit of kindness, compassion and solidarity among the members of the Defence forces in looking after their comrades and in extending that work into the local community.

May I also say again how truly glad I am to have the opportunity to tell you face to face how much I value the honourable role you have played in our centenary commemorations and the spirit of active participation and human solidarity that propelled you to join Ireland’s Defence Forces.] 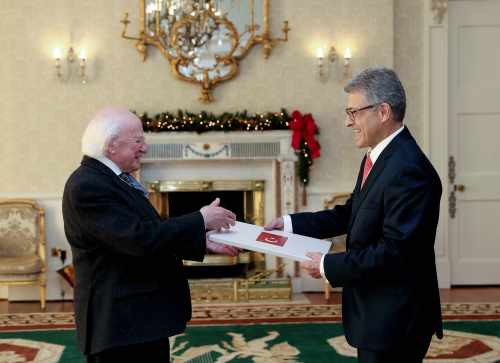