Speech at the Linenhall Library

We have both a responsibility and an opportunity, during this decade of centenaries, to remember generously, rather than narrowly, and to commemorate in a way that is respectful of historical complexities and contingency.

[May I thank Julie Andrews, Director of the Linen Hall Library, and all of the Library   staff and board, for the kind invitation to come here today. I am delighted to have this opportunity to visit what is not just one of Belfast’s most iconic buildings but a very  important cultural institution for Northern Ireland and for Ireland as a whole.]

The Linen Hall Library is an immensely valuable repository of Irish thought, literature and history which comprises a fine collection of printed books from early Belfast and Ulster, as well as many other treasures, such as many first editions of the work of Seamus Heaney. Harbouring as it does about 250,000 items in the “Northern Ireland collection” this Library is also an incomparable archive of what is often referred to as “the Troubles”.

When I say that this library is a “repository” of Irish culture, I am not suggesting this in any passive way. Libraries are places of intellectual awakening. They are never just “shrines for the worship of books”, but they are, to use Socrates’ metaphor, the “delivery room for the birth of ideas.”

From its very foundation, on 13th May 1788, the Linen Hall Library has been a catalyst for thought, a place where ideas were born and debated. Founded by, as it was described, a group of “worthy plebeians who would do honour to any town”, the “Belfast Reading Society” as it was then called, bears testimony to that great intellectual and political vibrancy which stirred the century of the enlightenment.

Those were times when, across Europe and America, intellectual speculation through the exercise of reason was flourishing. It was a time, too, when democratic culture was gaining ground, when literacy was spreading across different strata of society, and when “reading” and “debating societies” were being created across Britain and Ireland.

The Royal Irish Academy, for example, was established in that same period, in 1785, by gentlemen from Dublin University who were willing to promote the study of literature, science and “the antiquities”, but also to respond to those scholars who had questioned the capacity of the Irish mind to be a source of myth. David Hume was a loud voice for that view. Those years also saw the creation, further south, of the Cork Library Society, in 1790, and the magnificent Old Library at Trinity College was also established in that same century, just a few decades earlier.

Belfast’s Linen Hall Library came into being as an expression of the desire of the local merchant class to establish a repository for books which would benefit, not just themselves, but their community as a whole. Accordingly, the name of the Society was changed, in 1792, to “The Belfast Society for Promoting Knowledge”, before it became known as the White Linen Hall Library, borrowing its name from its first permanent premises, now occupied, as you know, by Belfast City Hall.

Today the Linen Hall Library continues to embody the ethos of self-improvement, independence and pragmatism that is the legacy of the voice of so many dissenting Belfast Presbyterians, such as the Reverend William Bruce, who so valiantly championed social and political reform on this island.

I am mindful, too, that we stand today in the midst of a collection of books and manuscripts which began a decade before the United Irishmen Rebellion and which has endured the vicissitudes of our tangled, complex, and often painful history. Indeed this Library’s second librarian, and a close friend of Wolfe Tone’s, Thomas Russell, was one of those very United Irishmen.

The non-sectarian principles proclaimed by Theobald Wolfe Tone, the ideals of equality and freedom he heralded, the common ground of fraternity he envisaged for his and future generations of Irish men and women – those are generous principles that can still speak to us nowadays.

It is a legacy that belongs to all Irish people. It is, also, a legacy which we have had ample opportunity to recall, alongside the many other political and intellectual influences which we have inherited from the past, in this year when we commemorate two milestone events in the history of this island, namely the Easter Rising of 1916 and the Battle of the Somme.

We have both a responsibility and an opportunity, during this decade of centenaries, to remember generously, rather than narrowly, and to commemorate in a way that is respectful of historical complexities and contingency. We have an opportunity to recall a decade of divisions and struggles but also a decade of deep thought, of passionate discussion, of idealism. A decade during which many futures were possible.

As we recall that time of great industry, when Belfast was regarded as one of the workshops of the world, we also remember that those were times of great inequality. We remember the contribution of men and women like James Connolly or Eva Gore-Booth in awakening a social consciousness on these islands and in organising trade unions in Dublin, in Glasgow, in Belfast, or in Manchester. We also pay tribute to the courageous work of suffragists such as Lillian Metge, Elizabeth Priestly McCracken or Margaret McCoubrey, in securing equality for women.

As we do so, we are encouraged to ask ourselves what it is that we might retain of the emancipatory promise these men and women handed down to us as material  for the moulding of our complex contemporary reality. How might we build a better life on these islands in the twenty first century? What remains to be done so that Belfast, Northern Ireland, and Ireland as a whole, be places where citizens can realise their full potential and capacities?

I see places of learning and culture such as this Library as being at the heart of such a future. Libraries are, as we are reminded upon entering these halls, “A Doorway to Our Future”. Indeed they are places that invite us to be inquisitive about the world we live in. They are places that invite us to take the time to learn, and learn patiently, about the intricacies of our past. They are places that call upon us to reflect on how we might use – in our own lives and in our collective endeavours – that knowledge, that gift of imagination, which was vindicated and handed down to us through so many works of science, literature and poetry.

We need, and will continue to need, such institutions that provide us with the tools and the space – both physical and intellectual – to think, to reflect in silence, to become absorbed in reading.

In two years from now we will be celebrating the centenary of the end of World War One, and also the twentieth anniversary of the Good Friday Agreement, which enabled a fresh start on our journey towards reconciliation and fraternity.

That anniversary will require us to pause and reflect on all that we have achieved as a society over the last two decades. We will celebrate the triumph of democracy, so clearly endorsed in May 1998, in what was the first democratic expression of all the people on this island, acting together, since 1918.

Irish people expressed, through their vote, their rejection of the ways and methods of violence, and their shared desire to build a reconciled society. A place secure in the right to be Irish, British, or both.

The complex feelings of belonging, the multiple identities that are possible on this island and in Europe are a great asset. It is an intellectual and cultural patrimony that we cherish in our hearts and minds – and one that is also curated for us in institutions such as the Linen Hall Library, which record the complex web of competing, but also converging, aspirations and influences that bind together the people of this island.

We must never allow any tendentious or simplified version of the past to limit the future of the children of 1998. Belfast’s Linen Hall Library is one several institutions in Northern Ireland that contribute in such valuable ways to fostering an open approach to our past and future. It is a shared space – a space in which people of all traditions gather to listen, to learn but also to challenge. As Seamus Heaney said:

“Saying the words ‘Linen Hall’ is salubrious and restorative, unpolluting, health giving... The Library is community, not a repository – it is a style, a conviction, a value.”

May I thank all of you, once again, for your kind invitation and warm welcome to Belfast and to Northern Ireland. I wish the staff and members of this unique and cherished cultural institution the very best in all of their future endeavours. 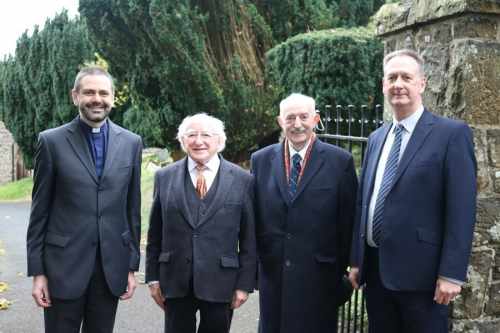