Speech at the Travellers in Prison Initiative National Conference

May I thank Anne Costello of the Travellers in Prison Initiative for the invitation to speak with you today at your national conference, an important event that raises awareness among all stakeholders about issues facing Travellers in the criminal justice system, and the various initiatives that have taken place to improve outcomes for Travellers at all stages in the system.

The Travellers in Prison Initiative was developed by the St Stephen’s Green Trust in 2014 as a response to the particular needs and circumstances of Travellers in prison. Funded by the Trust, the Irish Prison Service, the Irish Probation Service and the HSE, the work you do, in collaboration with a wide range of community and statutory sector organisations such as Pavee Point, the National Traveller Women’s Forum, the Irish Traveller Movement, the Irish Penal Reform Trust, and so many others, is such vital work, seeking as it does to develop and deliver changes in policy and practice which will have a positive influence on Travellers in prison, their families and their communities.

May I, before going any further, take this opportunity to pay tribute to Michael McDonagh who sadly passed away recently. As manager of Meath Travellers Workshop, Michael worked consistently and quietly for many years to achieve ethnic status for Irish Travellers, and his work on a prison links project with his wife Nell, where they listened to and supported Travellers in prison, and aided them on their release, was so important and benefitted so many in their transition to life outside prison.

The Travellers in Prison Initiative is also an exemplar initiative in its placing Travellers’ participation front and centre in all you do, recognising as it does that policies and programmes targeted at Travellers will not be effective without the meaningful participation of Travellers at the design, implementation and monitoring stages.

The report which you are launching today is yet another example of the many ways in which your work helps to shape such policies and initiatives aimed at improving the prospects for the Travelling community. Compiled as it was by Dr. Siobhán Madden, We Keep Going for Each Other: Family Stories of Travellers through Prison Times, comprises a joint narrative project by the Travellers in Prison Initiative and Galway Traveller Movement. It is invaluable too in its providing much-needed qualitative research on Traveller men in prison and Traveller women as family members.

Founded on the recognition, as is so well articulated in the report, that “people are experts in their own lived experience”, the authors’ diverse voices, knowledge and experiences are woven to create a collective narrative whose stories tell about the traumatic effects of racism and discrimination, about skills and knowledge of surviving difficult times, and the sustaining importance of family and culture.

Your focus on gender is so important, too, as imprisonment affects Traveller men and women differently, with women perhaps being more likely to be impacted more negatively.

The Travelling community is an essential and foundational part of the Irish nation, a part of the Irish experience for perhaps a millennium that has both shared and unique characteristics. Today Irish Travellers retain a distinctive position in Ireland as a native, but distinctly nomadic, group, one that in March 2017, and it was not before time, was recognised as a distinct ethnic group in this country.

Ireland’s increased urbanisation since the 1960s has presented the Travelling community with new demands and difficult challenges. Industrialisation, the mechanisation of farming, the introduction of television and radio into the majority of Irish households – all of these processes saw the Travelling community’s traditional role as tinsmiths, horse-traders, agricultural labourers, and storytellers gradually eroded.

As large numbers of Travellers were forced to move to urbanised areas in search of work, the nomadic lifestyle became increasingly difficult to maintain, as did Traveller culture and the core elements of its traditional and established way of life.

These external factors, however, do not excuse the uncaring and, at times, hostile and ignorant attitudes of some of the public, or the authoritarian push for one-size-fits-all solutions in housing policies by local and national administrations; policies that have been such a regressive feature of housing provision throughout the decades in this country, something I witnessed when I was a public representative in Galway working with Travellers and advocating for Travellers’ rights and improvements to Travellers’ living conditions. There were some appalling experiences that I recall, ones that put children at risk, that injured children, so often in defence of previous bureaucratic error, inflexibility and an absolute lack of compassion.

Travellers, through local authority interpretations of Housing Acts, came under increasing pressure to ‘assimilate’, to surrender to what was seen by some as an inevitable absorbing of the Travelling community into what they called ‘mainstream’ Irish society. The nomadic way of life was seen as problematic, opportunities for nomadism were continually reduced, and the Travelling community, with its rich, unique and wonderful heritage, was urged to become a ‘settled’ people. Needless to say they were requested to abandon their valued proximity to animals.

This paternalistic, at best, and ill-informed way of thinking was manifest in the Report of the Commission on Itineracy of 1963 and became reflected in legislation governing the provision of accommodation to members of the Travelling Community. The Commission was made up of senior representatives of the Irish state, including judges, Gardaí, religious organisations and numerous farming lobby groups. Shamefully, the Commission had no Traveller representatives, and while attempts were made to consult Travellers, such consultations comprised of bizarre, unannounced visits which resulted in little input into the report. The official State policy that resulted was to solve the so-called “problem” of Travellers by housing them, and ensuring that they did not travel any more.

Yet, even in this regard, i.e. of defining Travellers’ lives as ‘a problem’, the State failed, and continues to do so. In May 2021, the Ombudsman for Children, Dr Niall Muldoon, published a report that was highly critical of the standards of accommodation provided for Travellers, describing some accommodation as “deplorable”. This is shameful. We have so much work still to do.

Given such a general background, the specific background to the Travellers in Prison Initiative can be traced to the Irish Penal Reform Trust’s research report published in 2014, Travellers in the Irish Prison System. That report documented the challenges and difficulties being experienced by Travellers within Irish prisons.

The disproportionate representation of Travellers in the penal system is not unique to Ireland – the same trend can be found in other countries with an indigenous minority ethnic population, such as New Zealand where Maori people account for about 14 percent of the population and 51 percent of prisoners – but it does raise a number of very fundamental questions about our society, and the property privileging influence on legal systems.

It seems basic to suggest that we need to analyse, understand, and come to terms with, the wider conditions of Travellers’ lives if we are to understand their over-representation in the prisons. As a community, Travellers suffer extreme discrimination, racism, social exclusion and economic disadvantage. With an unemployment rate of approximately 80 percent, an average school completion age of 15 years and a suicide rate of six times that of the settled community, we have reasons to be alarmed.

Any general population with a basic concept of citizenship and justice, should be concerned at the significant proportion of their fellow citizens from minority groups who are being routinely excluded, generation after generation. Why, I might add, was it regarded as sensible in responding to the Financial Crisis of 2008 to cut back on home school liaison to the Traveller Community? It drastically cut both participation and finishing levels.

An anti-Traveller sensibility, too, has become, in some circles, acceptable to hold and even to voice. Anti-Traveller sentiment in Irish society can be traced back in particular to that 1963 government report from the Commission on Itinerancy, to which I already referred, which described Travellers as “problems” for which there would be “no final solution [...] until they are absorbed into the general community”.

As Thomas McCann, Traveller activist and founder of the Traveller Counselling Service put it at your own conference in 2017, that 1963 report “saw [Travellers] as ‘failed settled people’. […] Multiple problems have flowed from [that report], including internalised shame among Travellers and hostility towards Travellers from the settled community”.

The 1996 Report of the European Parliament Committee of Enquiry on Racism and Xenophobia found Travellers to be among the most discriminated-against ethnic groups in Ireland, and yet Travellers’ status remained insecure in the absence of widespread legal endorsement by the State until 2017.

Unless we as a society address the wider societal and institutional barriers that stand between Travellers realising their full potential to active, participative citizenship, we will continue to deny our fellow citizens their fundamental human rights. We – each of us – must call out and challenge anti-Traveller sentiment for what it is: racist bigotry that should hold no place in a true Republic. We need to move towards a zero tolerance of discriminatory or derogatory language of Travellers in the same manner in which it is unacceptable against other minorities.

We need to develop a deeper understanding of under-represented groups, starting in the education system at the earliest age. More work needs to be done, too, to ensure that recruitment processes are fair and unbiased against Travellers.

We must do more to ensure that Travellers have access to, and derive positive outcomes from, prison-based services and re-integration supports. Prison must be rehabilitative, not a conduit into a spiral of criminality. I know of some fine young men who entered prison drug free and emerged drug dependent, and with a new vulnerability as a result.

We require, too, culturally appropriate family supports for Travellers and development of initiatives to promote peer support and advocacy amongst Travellers in prison.

In recent years we have, in so many ways, at a formal level, been making efforts towards building an inclusive society that values and embraces diversity, one in which we seek tolerance in our attitudes towards each other and how we choose to lead our lives. The relatively recent decision by the State to acknowledge the Traveller community as an indigenous ethnic minority has helped to unlock an ingrained systemic mindset, but we need to see changes in policy at local as well as State level, and across all aspects of society, and within the institutions of the State, including our prisons. Again, citizens must stand up and be counted when it comes to housing policy and Travellers’ rights. Where that has happened real gains have been made, including in prisons, where initiatives have been welcomed, facilities used. There are teachers and instructors to whom we should be so grateful.

I hope also that as a society we, across the settled and Traveller communities, can find within us the resolve, the imagination, and generosity of spirit that is required to make those accommodations for each other, that are required for all of us to vindicate our rights as citizens and to be true to our heritage, in all of its manifestations.

May I conclude, then, by wishing your conference well. I have no doubt that the speakers and ensuing discussions over the course of the morning will be stimulating and fruitful, and I send my very best wishes to all those taking part. 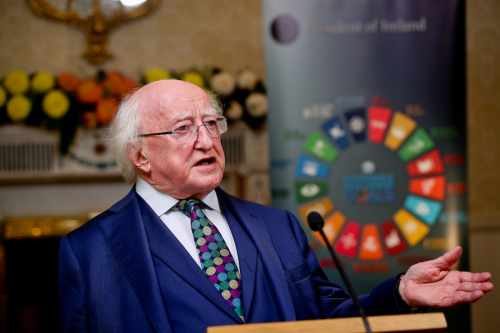