You are all most welcome to Áras an Uachtaráin as we mark the anniversaries of two very important events – responses to the great hurt and trauma that was inflicted on so many of you by the neglect and failures of the Irish State to require accountability and a duty of care to those within institutions they funded, and for which they had a responsibility.  The establishment of the Aislinn Education and Support Centre later renamed so appropriately to the memory Christine Buckley who campaigned so tirelessly, and with generosity for victims of institutional child abuse, and the publication of the Ryan Report.

[The Christine Buckley Centre is an important space, one that encompasses and reminds us of the qualities that should and must lie at the heart of any functioning society.]

It is inclusive, supportive and participatory, allowing all those who suffered abuse at the hands of the State the opportunity to recount their own individual and unique narratives and to hear the stories of others who were also failed by a society that had clearly not lived up to its constitutional aspiration to cherish all its children equally.

The Christine Buckley Centre is rooted in a sense of compassion, care and empathy; has grown and developed through the legacy and inspiration of Christine Buckley and Carmel McDonnell Byrne’s vision for positive change, a vision that was and is shared by all those involved with the Centre. The Centre embraces those who have spent so much of their lives feeling vulnerable or excluded, allowing new futures to be imagined and new possibilities to be realised.

I am very glad that Carmel is here today, and we also of course remember Christine and her impassioned work on behalf of survivors of institutional abuse.

It was that impassioned work, and the courage and generosity of so many others prepared to speak out and fight for justice that led to an apology, twenty years ago this month, from our then Taoiseach Bertie Ahern on behalf of the State and all its citizens.

That was a critical moment in our shared history, a moment when your stories were eventually acknowledged and became officially written into the story of our nation. It was a moment when, at last, we spoke as one voice in validation of the pain and hurt that was inflicted on so many of our young people, a moment when we committed to sharing your burden, and a moment that ensured your experiences would be stitched into the common memory of a nation.

It is from those stories that we can draw much wisdom, including the realisation of the great harm that can be done when we do not remain vigilant, when we do not have the courage to question the status quo, fail to critique or even identify or reject harmful ideologies, counter any prevalent rhetoric of prejudice or injustice. Through your stories, and the stories of other vulnerable people who had been entrusted to the care of the State but who were instead mistreated, Irish society was enabled, indeed forced, to look at itself unflinchingly, to see clearly the flawed premises on which it was constructed, the faults and weaknesses which had led to such a shameful lack of shared humanity.

In the course of that apology a commitment was made that we, as a society, would do all we could to address the great damage that had been inflicted on generations of children in the name of a State that after all claimed to be a democracy. Fulfilling that commitment remains an obligation.

That commitment did of course see the establishment of a Commission to Inquire into Child Abuse and ten years ago this month it published its report, known as the Ryan Report, following which the Irish Government undertook to ensure that all children, especially those who were most vulnerable, would be protected to the highest standard.

While progress has been made in the decade since the publication of the Ryan Report it is imperative that the State remain vigilant in fulfilling its obligation to protect all of our citizens. It is essential that we strive to learn from the period of history that was tarnished by silence, by a failure to listen, an abdication of responsibility, a distortion of religious ideology and a refusal to hear and believe the tragic stories of those abandoned by the State to institutional care.

Being positive there is, I believe, a real wish amongst policy makers, professionals and society in general to ensure that children in Ireland today are valued in all their circumstances and are respected as equal citizens, as rights holders, and as individuals who carry their own stories, potential and possibilities.

[Of course there can equally, however, be no doubt that there remains a considerable stretch of road to travel on our journey towards delivering on the vision of an Ireland that “… cherishes all of its children equally …”.]

If we are to shape a future for this country that will be a truly equal one, recognising the fundamental dignity of each and every citizen it is critical that we continue to address the mistakes of the past, including that of viewing vulnerable citizens as something ‘other’ and separate from ourselves. It is the loss of such a critical sense of shared humanity that can allow us, as individuals, to ignore our responsibility in helping to craft a shared future with shared hopes and a common purpose, a future that listens to all of the voices that make up our society.

It is very easy, in looking to the past, to place the blame for institutional abuse solely on those who ran such institutions, ignoring the role of our State in allowing it and the many citizens who deliberately colluded or averted their gaze, who abdicated from any responsibility for the form and shape of the society of which they were members. In the words of the German philosopher Hannah Arendt “Evil thrives on apathy and cannot survive without it”.

Society is not an abstract concept. Society is a composition of individuals who together shoulder the responsibility for its crafting and its flourishing. Today we continue, as a society, to share responsibility for citizens who are vulnerable and defenceless including the nation’s children. It is greatly important that we accept individually and collectively that serious responsibility.

In recent decades many men and women have come forward, often at great personal cost, to bravely share their stories. You are inspiring and courageous citizens who have encouraged and enabled us to aspire towards a new and better version of our Irishness. In crafting that new version, however, we must be truthful and honest and acknowledge the many ways in which we are in danger of repeating the mistakes of the past and where we continue to fail so many children who live impoverished, insecure and marginalised lives in contemporary Ireland.

By telling your stories and encouraging others to share theirs all of you have ensured that others remember now and into the future the cruel regimes into which so many of Ireland’s children were abandoned. And because we remember we have a duty to combat any discrimination or inequality in our society as we continue to build a now richly diverse Ireland and a country that is mindful of playing its part in the global struggle for human decency.

[By your courage and your great will to build lives of possibility and hope, to rise above the great wrong that was done to you, you are an inspiration and a reminder that we must all remain vigilant and continue to share a common obligation to value and uphold human dignity, freedom, equality and democracy.] 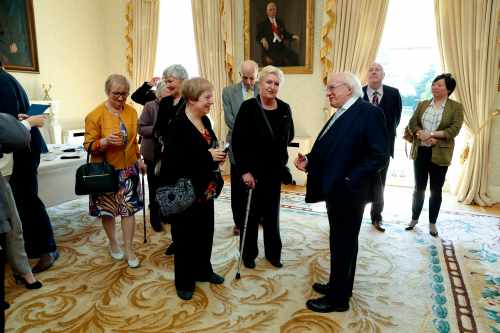