May I start with a story which your Secretary General, Liam O’Dwyer, shared with me last week – a story which is emblematic of the great humanitarian work carried out by the Red Cross:

Ten years ago, a man contacted the section of the Irish Red Cross responsible for reuniting family members who have been separated by war, a natural disaster or migration. This man and his wife, now refugees in Ireland, had lost track of their daughter during the 1999 bombing of Chechnya by the Russian Army.

On Wednesday last week, the man was called to the Irish Red Cross offices in Dublin where he was handed a letter from his daughter.

According to the member of staff who gave him the letter, the man cried and then he practically ran out the door, so anxious was he to share the news with his wife. This couple – who had lost their daughter 15 years ago – knew, at last, that she was alive and where to find her.

So often do we rejoice at such accounts of families reunited, of people rescued from life-threatening situations. So often at public gatherings do we feel reassured by a competent presence ready to provide assistance in the event of an accident. But rarely do we pause to appreciate the hard work, the dedication, and the generous giving of time and skill that underpin all of these things.

I am very pleased, therefore, to have the opportunity, today, to acknowledge the outstanding work of the Red Cross, both as a national and an international organisation, and to welcome so many Irish Red Cross volunteers to Áras an Uachtaráin.

Over the past two months, the Irish Red Cross has been tested time and again by the dreadful floods that have devastated the homes and livelihoods of so many across Ireland. Last week I visited flooded communities in county Galway and county Wexford, and I saw at first hand the ravages caused to people’s family homes and business premises.

I was greatly impressed by the effort and competence deployed by so many volunteers, including those of the Irish Red Cross, in providing an emergency response to the flooding. Indeed the Red Cross volunteers spent days and nights out – laying sandbags, evacuating people, getting those with a medical condition to hospital, and simply cleaning up.

For those facing disaster and who may feel overwhelmed by a sense of loss and anxiety, the practical help and emotional support offered by strangers is a source of great comfort. Through the help you provide to those in need of assistance, through the work you undertake in often challenging circumstances, you demonstrate a concern for others, and a courage, that marks you out as active and caring citizens. You are people who do not stand back and wait for others to sort out the problem.

May I thank all of you, then, on behalf of the Irish people, for your spirit of solidarity and participation, and for your work which quietly enhances the lives of so many people.

Such a spirit of compassionate volunteering is at the heart of the first aiders’ ethos which we are celebrating this afternoon. The excellence of the First Aid training provided by the Irish Red Cross is demonstrated at so many public events across Ireland every year, and indeed vindicated internationally through the achievements of Irish teams who compete at European level.

I take this opportunity to congratulate Dublin for their performance in 2014, and I wish Louth the very best as they head to Slovenia to represent Ireland later this year.

It is not exaggerated to say that the Irish Red Cross has been leading the way internationally in developing innovative ways of engaging new audiences and communities in the essential skills of First Aid. Three years ago,[1] I had the pleasure of acknowledging the vision of the Irish Red Cross as I attended the graduation of Red Cross Health and First Aid volunteers at Mountjoy prison. We can all be proud that Ireland is the first country in the world to have introduced the “Health and First Aid in Prisons Programme”, whereby inmates volunteer to work as peer educators in the prison setting.

I was delighted to learn that the Irish Red Cross has won several Awards for this groundbreaking initiative, and that 17 other countries have expressed their interest in running similar programmes. The World Health Organisation has also endorsed the project and is committed to promoting it.

It is worth noting that the original programme has been expanded to include a non-violence module which is very successful in reducing violence within prisons. The Probation Service are now working with a number of those prisoners to promote health, first aid and non-violence in their communities once released.

May I take this opportunity to commend, once again, the Irish Red Cross on this important work inside our prisons. Indeed the welfare of prisoners has been at the very core of the International Red Cross and Red Crescent Movement’s action historically, and it remains one of its central concerns today. Most recently, the 32nd International Conference, held in Geneva last December, [2] had as one of its focuses the strengthening of humanitarian law, in particular in relation to the detention of prisoners.

The plight of refugees, to which I have alluded at the beginning of my speech, has been another pivotal concern of the International Committee of the Red Cross over the years. The ongoing refugee crisis is equally a central concern for all of the Movement’s National Societies, in both departure and destination countries, but also in so-called “transit countries”.

I know that – amongst other things – the Irish Red Cross runs the “Register of Pledges” for the Irish Government, an important database that enables the registration and coordination of the hundreds of pledges of support made by Irish people to the victims of the migration crisis arriving in Ireland. These pledges are testament to the generosity of our fellow citizens, who are willing to help in very concrete ways by offering, some a bedroom or a holiday home as accommodation; others education or counselling services.  Indeed the situation of refugees is not a matter for humanitarian professionals only; it calls upon each and every one of us as citizens and human beings.

Mar fhocail scoir, a few words about the Trophy around which we are gathered today. This Trophy was first presented to the Irish Red Cross by Douglas Hyde, in 1943. It was designed by Oswald Reeves, who took his inspiration from the acts of compassion that reportedly happened during the fierce battle of the Ford between Cú Chulainn and Ferdia.

The book of Leinster tells us that during an interval in the fight:

“Came healing and curing folk to heal and to cure them, and they laid healing herbs and grasses and a curing charm on their cuts and stabs, their gashes and many wounds. Of every healing herb and grass and curing charm that was brought and was applied to the cuts and stabs, to the gashes and many wounds of Cú Chulainn, a like portion thereof he sent across the ford westward to Ferdia.”

Such gestures of assistance and compassion remind us of the spirit of altruism without discrimination, of the profoundly ethical human impulse to come to the help of the sick and wounded, which animated Jean-Henri Dunant when he founded the Red Cross in 1863.

This urge to alleviate human suffering, to protect life and health, and to uphold human dignity is very much alive in the seven principles that guide the actions of the Red Cross and  Red Crescent Movement today, namely – humanity, impartiality, independence, neutrality, voluntary service, unity and universality.

Around the world, the emblem of the red cross on a white background is recognised as a symbol of protection and hope in situations of emergency and vulnerability.

On behalf of the Irish people, I thank all of you who are associated with the Irish Red Cross, whether as professionals or volunteers. And now it is my great pleasure to present this beautiful Trophy to the competition winners. 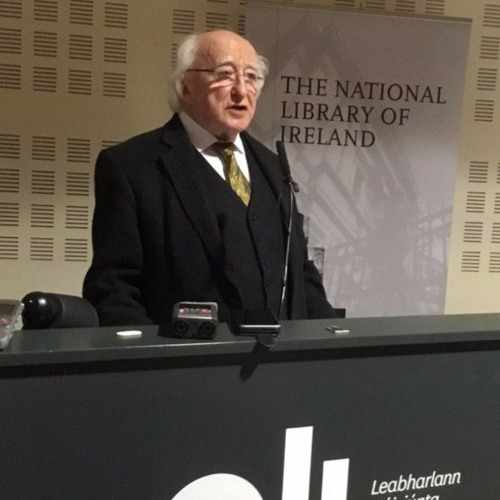