Speech at the 2019 Gaisce Gold Awards

[I am delighted to welcome you all here today to this important occasion as we celebrate the conferring of Gold Gaisce Awards; and     I am delighted that Gaisce Chief Executive, Yvonne McKenna, and all the Gaisce team as well as Gaisce council members are present today with us.]

We are recognising the dedication, perseverance and generosity of 77 Gaisce Gold recipients, 77 talented young people who will today be presented with their award. For them it will mark the conclusion of a journey – a journey in which they have tested themselves, through thoughts and actions, first discovering and then, perhaps, even surpassing their own limits.

May I say to the recipients that it was a journey in which you demonstrated not only a personal determination, but also a commitment to the service of your communities and of your fellow citizens. I particularly commend you all for these efforts, efforts that cross a wide range of activities and innovations.

As you are no doubt aware, Gaisce, the President’s Award, is a self-development programme for young people between the ages of   15 and 25 and has been in existence for some 34 years. The Awards initially flourished under the patronage of then President Patrick J. Hillary and have been continually supported by each President since then, with over 377,000 young people now having participated in the Gaisce programme.

Gaisce is driven by the enthusiasm, ability and resilience of young people. Through the Gaisce programme, it is hoped that young people can be encouraged and guided so that their innate talents and abilities, as well as their sense of citizenship and social agency, can be realised to their full potential.

Gaisce is motivated to follow and adhere to central values set out by its staff and council members. These values include empowerment, inclusion and equality, respect, social responsibility and excellence.

Today we have 77 awardees from 17 counties. Eighteen of our awardees are from Northern Ireland as part of the Joint Award Initiative, including, for the first time, five awardees from Oliver Plunkett’s Youth Club. We have a brother and sister from Cork receiving their Awards, two of three triplets from Co. Down, and two sisters from Co. Tyrone. We also have an awardee whose mother received her Gold Award from former President Mary Robinson.

Participants this year came from 24 second-level schools, four Universities, two organisations for people with disabilities, three uniformed organisations, three community and voluntary sector organisations, and a Garda Youth Diversion project – a great spread of backgrounds representing the diverse and rich tapestry that is the youth of Ireland.

During the first term of my Presidency, I established the ‘Being Young and Irish’ initiative in order to listen to the views, concerns and vision of a generation that would be critical to the shaping of a new Ireland. The young people who participated emphasised values such as solidarity, equality, inclusion, pluralism, freedom of thought and expression.

The community activities you have undertaken as part of the Gasice programme are grounded in these values; indeed they are grounded in the idealism of the founders of our Republic a century ago. Together we can invoke the character of the Ireland we wish to create, invoking the values as expressed by the founders of the State to create a country worthy of the title ‘Republic’.

Following on from my ‘Being Young and Irish’ initiative, I shall shortly be launching new measures, including one aimed at fostering greater economic literacy across the citizenry, something that is so necessary if we are to rise to the challenge of creating a more equal, and just society together with a sustainable economy.

Through all its new initiatives, including Wavelength which focuses on the inclusion of asylum-seekers, and Likeminded which targets those from the LGBTI community, as well as ongoing work with the Irish Prison Service, Gaisce is demonstrating a commitment to promoting greater diversity and inclusion by supporting young people from different communities. I want to support young people as they develop new skills, meet new friends, engage with their communities, have an adventure, and discover their potential by embarking on the Gaisce Award journey.

Each of your individual stories reminds us of the immense potential that lies within all of us, irrespective of our circumstances. You acquired new skills and improved old ones. You discovered that, with practice and diligence, you were capable of more than you might have known. You have undertaken new sporting and physical challenges, both as individuals and as members of a team, and found a new balance between mind and body.

Today marks an ending, the achievement of the highest Gaisce distinction, but also a continuation, as you will continue to be members, not only of your local and national communities, but also of the global community of this fragile planet, with all the duties and responsibilities, and rights and opportunities that such a membership entails.

We live in a time in which we face many challenges, when social cohesion is being undermined, when a discourse of fear and exclusion is being promulgated by the most powerful, but we must maintain faith in our human ingenuity, our collective capability and capacity for good, our ability to invent and to innovate for the advancement of humankind.

This means sometimes pushing ourselves outside our comfort zones in order to realise our best work, for our best resources reside in our creative use of imagination and enlightened reason, our ability to remember our pasts and anticipate our future, as well as our universal feelings of sympathy and empathy for one another.

This demands also that we as societies move away from ‘consuming’ the world – from being “consumed with consumption” – to experiencing it and resonating with it. It is qualities such as these that have been given expression in the empathy, kindness, persistence, patience, and personal initiative you have all shown in achieving your awards.

Your generation faces at least three great contemporary challenges: the humanitarian crisis and the moral imperative to welcome those fleeing war, persecution, famine and natural disasters; the need to create a just and sustainable society and economy, to re-build cohesion and social inclusion, both at home and abroad, which has been so badly damaged in recent times and has resulted in a democratic crisis; and above all, the urgent necessity to address the causes and consequences of climate change, perhaps the greatest crisis of all, an existential crisis for which the time to act is fast disappearing.

Related to this, we must tackle desertification and its causes, including poverty, food insecurity, climate change, land degradation and policies that marginalise people. Our future prosperity and well-being depend fundamentally on our ability to protect and restore our natural environment.

It may sometimes seem difficult to imagine the difference that any single individual can make when confronted by these global issues. However, as you have learned through all the hard work you have undertaken to reach this day, it is through numberless acts of kindness, compassion and solidarity that you will change our world.

I encourage you all to talk to as many people as possible about the responses that are required to realise the changes we need to make in our society to address the challenges we face.

It is so heartening to see the youth of today actively engaged in a new movement that seeks a paradigm shift to an ecological-social model, the widespread adoption of which is not only an important contribution towards intergenerational solidarity, it is our only realistic hope to create a more equal, cohesive and sustainable society and economy.

I recently convened a seminar in Áras an Uachtaráin entitled ‘Re-thinking Economics’, at which great thinkers on this subject, including Professors Ian Gough and Mariana Mazzucato, spoke in depth at how such a paradigm shift could be given reality.

As we live through this period in which we seek an exit from extreme individualism – during which the concept of society itself has been questioned and redefined narrowly and pejoratively, when public spaces, the State’s assets, in so many countries, have been commodified – we must come together, merging consciousness of what being human means for ecology, human need, dignity, respect for sources of truth and consolation, reasoned and revealed. We must combine and co-operate for the recovery of the public world.

We must also pursue peace and ensure that our boundless capacity for creativity and innovation, and the fruits of new science and technology, are employed for the promotion and preservation of peace, not the pursuit and prosecution of war.

I am confident that your generation will rise to these great challenges.

Let me, once again, congratulate you all for receiving the Gaisce Gold today. You have learned, accomplished and achieved so much of which you can be proud. You, and all those who received the Gaisce awards before you, have shown that we can look towards our future with hope and optimism. As President, I would also like to acknowledge and give my appreciation to all of you for the work you do within your communities. This is your day, a day for you and your families to celebrate your achievement.

[I wish you all the very best for the future, and I thank you all for your dedication and participation in the Gaisce programme.] 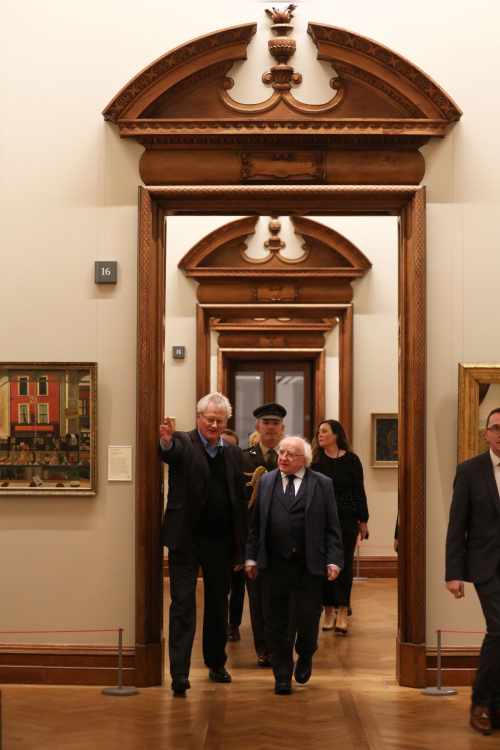