President opens the ‘Ireland in Focus: Photographing the 1950s’ exhibition

Speech at the opening of “Ireland in Focus: Photographing the 1950s”

...The power of photography, inter alia, lies in its capacity to not simply capture unique moments in time, but that as an art form it has such power to connect us to the past, to bring new perspective to the present moment as we are compelled to view it in the broader context of the history from which it grew.

[I am delighted to be here today to open this exhibition, which brings us so vividly and indeed movingly right into the heart of 1950s Ireland]

The use of images to convey human sensibility is a powerful form of communication, often expressing relationships in a manner that transcends words. I think of the late John Berger’s powerful images of migrants in Brussels and their families in Turkey. This evening we celebrate three great exponents of this art form.

Henri Cartier-Bresson was, without a doubt, one of the world’s greatest photographers.

He travelled to Ireland on two occasions while on assignment with Harper’s Bazaar in 1952 and 1962, shooting candidly in counties Cork, Dublin, Galway, Kerry, Kildare, Kilkenny, Tipperary, Westmeath and Wexford. The resulting images include landscapes, street scenes, portraits and public events, and are regarded not only as exceptional works of art, but also as keenly observed visual documentaries of a photo-journalist.

Of course, this was during a time of heavy emigration mostly from rural Ireland, with some 250,000 leaving Ireland between 1955 and 1960, mainly arriving in the UK. These photographs, therefore, capture an Ireland that, as landholding consolidated, could only support one landholder and facilitate one dowry. The rest had to take the boat.

Ireland would have its famous visit, two decades earlier, of Sol Kimball and Conrad Arensberg whose research in North Claire in the fictional townlands of Luogh and Raymonagh, through their Irish Countryman 1934 and Family and Community in Ireland 1968, dominate Irish accounts in anthropology

I understand the majority of the Irish images on display have never been shown in Ireland or indeed elsewhere, Ní fhacthas riamh cheana iad. So we are fortunate in seeing these images of a period often neglected by Irish historiography, one in which the professional, agricultural producers, and institutional forces took on a particular class formation which would last into the modern period.

Dr. Anne Byrne, Dr. Tony Varley and Prof. Chris Curtin have made a valuable critical contribution in contextualising this work. The images we see will act, at times, as a corrective on Arensberg and Kimball’s somewhat ideological project.

As well as these particular photographs we view this evening, the Cartier-Bresson Foundation has kindly provided accompanying materials from his missions in Ireland, including notes, correspondence, original contact prints, and associated artefacts. Based on archive research in Paris, as well as interviews with people he met and photographed in Ireland, the exhibition provides new insights into the photographic legacy of Cartier-Bresson, as well as highlighting his influence on Irish photography.

The photographs on display are now part of an ever-growing social history of this country, images of bygone times and faces that may no longer be with us. However, they have to be contextualised for their power lies in what they convey. The stories that are conveyed in faces, the marks and patterns of spaces, implements and image both transient and lasting.

We are fortunate that a photographer of such distinction and reputation took such an interest in this period of social history. Cartier-Bresson spent more than three decades on assignment for Life and other journals. He travelled without bounds, documenting some of the great upheavals of the 20th century — the Spanish civil war, the liberation of Paris in 1944, the 1968 student rebellion in Paris, the fall of the Kuomintang in China to the communists, the assassination of Mahatma Gandhi, and the fall of the Berlin Wall. And along the way he paused to document portraits of Camus, Picasso, Colette, Matisse, Pound and Giacometti.  However, many of his most renowned photographs, such as ‘Behind the Gare St Lazare’, are of moments of ordinary daily life.

This is a common thread in so much great art: an ability to capture a moment in time, to make it captivating, to endow what may be represented a significant or even ostensibly passing moment, subject or idea with feeling and emotion that elevates what is ordinary into something extraordinary, something that is personal into something universal.

As Cartier-Bresson remarked himself,

“In photography, the smallest thing can be a great subject. The little human detail can become a leitmotif”.

We are also so fortunate to have the opportunity, as part of this exhibition, to view and experience the work of the renowned American documentary photographer Dorothea Lange, and American anthropologist Robert Cresswell. As to the latter, it is to the efforts of Caoilte Breathnach in particular we are indebted for the gift of the Cresswell archive to the Irish people.

Dorothea Lange is, of course, renowned for her depression era photographs in her native America. They were photographs which spoke of a deep social consciousness, not only giving face to the poor and the displaced but also depicting the humanity which moves us, as fellow humans, to empathise and care. Dorothea came to Ireland in 1954 on an assignment for Life magazine and took 2,400 photographs during her time here. We can be very grateful that those images, lost for many years, were discovered twenty five years ago by Dubliner Gerry Mullins, thus allowing new generations to experience the people and landscape of Co Clare in the mid twentieth century.

As a young anthropology student, Robert Cresswell spent a year in Galway between 1955 and 1956 compiling a photographic documentary of life in the sea port village of Kinvara.

This photographic record was published under the title Une Communaute rurale de l'Irlande and is now regarded as a seminal anthropological study of rural life. In April 2010 he most generously donated his archive of some 450 photographs of Kinvara to the nation, for which we are most grateful.

The works on display here by Dorothea Lange and Robert Cresswell are both poignant and beautiful, yet realistic, recalling to us an Ireland that we have not, for many reasons, some ideological, given sufficient attention in Irish social studies, but which has profoundly shaped the society we inhabit today.

As in the work of Henri Cartier Bresson, they allow us to look back at that Ireland through the lens not only of the ‘outsider’, but also more through and critical scholarship thus bringing new perspective to how we view the particular chapter of Irish life that was the 1950s and reminding us of the words of critic and writer John Berger that

“The relation between what we see and what we know is never settled,”…

They remind us that the power of photography, inter alia, lies in its capacity to not simply capture unique moments in time, but that as an art form it has such power to connect us to the past, to bring new perspective to the present moment as we are compelled to view it in the broader context of the history from which it grew. Such photographs are an invaluable gift to society, providing a bridge across time, linking us to the stories of others, to landscapes altered for better or worse, and to times that have quietly disappeared but left their indelible imprint.

I want to stress, if I may, the great importance and power of arts and culture within society.

It may seem like a statement of the obvious, to say that the arts have a rich capacity to connect people across boundaries and barriers, to create strong and durable connections and enrich the lives of our societies. Indeed, time and again, as President of Ireland, I have witnessed the great resource that our artists and arts organisations constitute. It is Irishness at its best. We must celebrate in the public space their unique cultural and artistic traditions not only those with which we have been gifted but those that are being provided now by an imaginative, creative, and too often struggling, arts and culture community.

It is of critical importance, not only to the present generation but to future generations, that we safeguard public spaces and the opportunities for collective celebration, such as exhibitions like this one today. When diverse members of the community, citizens of all ages, backgrounds and creeds gather together to participate in art, as either creators of art or as an audience – supporting their local theatre, experiencing music and dance performances in the squares and parks that are so much part of their everyday lives, visiting a museum or library – that it is a celebration of the public world, a world that is shared, that is so different from the world of any exclusive privatised experience.

[Art is creative and emancipatory, and it must be seen as a necessary part of the infrastructure of our society, along with bridges, roads and broadband.]

May I take this occasion to say again to all involved in the arts, your contributions to citizenship are contributions in its best sense, for what you do is so very important for renewal and sustenance of the life of our society, for the health of our society, and as the best guarantee that can be of the imaginative possibilities of the citizens of the future.

Recognising the importance of the arts is something that is critical when, on occasion, the arts are viewed as something apart, peripheral, something that belongs on the fringes of society, a luxury for those who can afford it. That is a view that must be constantly contested if we are to ensure the survival of the arts and of cultural identity and the fundamental role of cultural access in the creation of true citizenship. Let us hear, perhaps as frequently as we hear of ‘Ireland Inc’ or ‘Ireland as the best place to do business’, of an Ireland where you can experience the joy and emancipation of culture in public buildings and the public world.

Bringing the arts right into the heart of our society and into the everyday spaces we inhabit is so important. Ba chóir na nealaíon a chuir ag croílár na tíre.

We must support and cherish our national museums and galleries, our libraries and local theatres, and we must re-imagine and re-energise public spaces, turning them into venues where the arts can be enjoyed and appreciated by all.

Ní cheart go mbeadh na nealaíon ar an imeall. If we put the arts at the very edge of our society, place them out of the reach of the majority of our citizens, we do ourselves a great disservice.

We deprive ourselves of the great power of the arts to bring us together, to stimulate debate and argument, to kindle the great wealth of creativity that translates into such wonderful experiences of life to be lived and imagined, voyages of new discovery, and the opening of pathways to different and better futures.

[May I conclude by congratulating everybody involved and wishing this exhibition of some of the work of Henri Cartier-Bresson, Dorothea Lange and Robert Creswell the best of success. I hope the numbers who visit it will surpass the 100,000 visitors for which the National Museum is aiming. And I wish all of you present an enjoyable and enriching experience as you view the exhibition.] 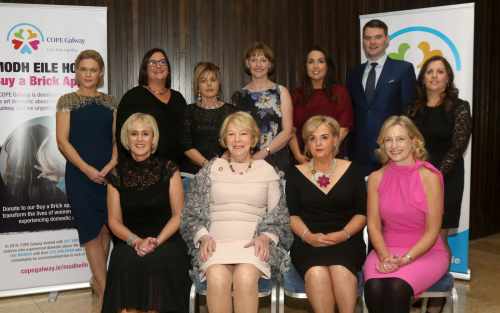 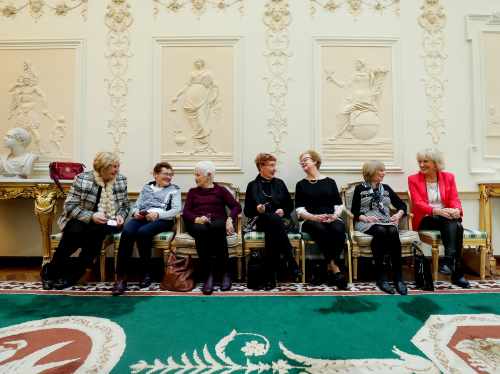