[It gives me enormous pleasure to be here today at Our Lady’sBoys Club to join you in celebrating your 75th anniversary and to officially open your new clubhouse facility.]

Like so many successful community initiatives, Our Lady’s Boys Club was founded and built on vision, a spirit of participation and a will to make a genuine and positive difference to the community. When Father Leonard Shiel established the club in 1941 I doubt that he realised just how enduring his vision would be. Today, Our Lady’s Boys Club is the largest youth club in the country and has woven its way into the fabric of community life in Galway, welcoming members from many neighbourhoods including Shantalla, Westside, Ballinfoyle, Rahoon, Corrib Park and Newcastle.

Generations of young men have grown and flourished in its  nurturing environment, many of them carrying the ethos and values of the club with them throughout their lives, passing them on to further generations and enabling the spirit of the club to touch many communities in Ireland and, indeed, across the world. That the club continues to be run by its former members, is, perhaps, the greatest endorsement of all that it has achieved over the years.

I recall visiting its Summer Camps on a number of occasions, including those times I was Mayor of Galway. I have memories of the late Wes Cleary and the Cunninghams who stressed the character forming purpose of Our Lady’s Boys’ Club.

The club has continuously evolved and progressed to reflect and tackle the different demands presented to us in a rapidly changing world. Established in an Ireland of huge poverty and deprivation, where one of the most important functions of the club was responding to lack of food through the provision of bread and jam to those who were hungry, the club has across the years remained relevant in an Ireland where emigration, unemployment, and new and changing societal problems continue to present challenges and difficulties for young people.

The club has offered a sharing of space and time and addressed the needs of many otherwise lonely or even excluded young persons by offering solidarity.

The club is, of course, synonymous with a long and proud tradition of sporting activity and achievement, allowing its members that vitally important opportunity to learn the importance of teamwork; of just how much can be achieved when everyone works together, playing their own important and unique role as they strive to achieve the best possible outcome. Here, as in many clubs across the country, sport has played, and continues to play, a significant role in creating a sense of community, of belonging and of active participation in our society.

The tradition of Our Lady’s Boys’ Club is attested to by the loyalty shown by those members who stay in touch and have continued to support it through the generations.

It is uplifting to know that Our Lady’s Boys Club has enshrined in its constitution a welcome for all the youth of the city regardless of age, race, colour, religion, sexual orientation or economic status.  This sense of inclusion is manifest in the fact that the club shares its facilities regularly with other organisations, schools and clubs, reminding us of the spirit of unity which has always lain at the heart of Our Lady’s Boys Club.

We are, as a nation, exiting we hope from a time of great challenges brought about by speculation rather than anything productive; we are now in a time which reminds us of the importance of community, and its power to offer reassurance, mutual support and a sense of belonging that is so critical to the countering of disappointment, destructive apathy or despair itself. It is so important therefore that we continue to cherish, preserve and value spaces and facilities such as Our Lady’s Boys Club, recognising the essential role they play in developing inclusive societies where all citizens from all creeds and all communities can work and play together in a spirit of mutual respect and understanding.

I have every confidence that the club will continue to evolve and remain relevant to future generations of young citizens who, like those who have gone before them, will carry with them through life the friendships, the support and the security that comes with knowing you are part of the Our Lady’s Boys Club family. Today we mark and celebrate the continued development and progress of the club with the opening of this new state of the art clubhouse.  I welcome this most recent development, your new clubhouse, and I know the work and time, the patience and commitment that lead to its achievement.

It is the culmination of many hours of hard work and much generosity by so many of you who have been tireless in bringing the new clubhouse to fruition. I thank all of you for that support and congratulate you on the achievement we mark today.

[In conclusion, may I thank you all once again for welcoming me here today and wish everyone involved with the club continued success in supporting and developing the youth of the city of Galway, both on and off the field.] 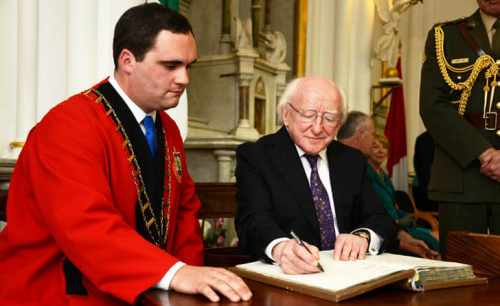 President is conferred with the Freedom of Drogheda