President marks International Day of Women and Girls in Science

My message to every young girl who is wondering if a future in science is for her, is to have faith; to take inspiration from the many talented women who have excelled in science and technology; to follow your passion, and let yourself be guided by the realisation that, through science, you can help in the solving of problems that impact millions of people, problems that have been allowed to persist for far too long. Carry your knowledge and skills with pride.

Science is an important and influential discipline – one which has a pivotal role to play in responding to the great humanitarian challenges of our time, and one which has the potential to make the greatest contribution to understanding and improving our world.

While significant progress in encouraging and engaging women and girls in Science, Technology, Engineering and Mathematics (STEM) has been made much remains to be achieved. In my opening address this year at the Young Scientist and Technology Exhibition, I spoke of how 62 percent of the 1,055 students who qualified to take part in the finals were female. This is a remarkable change from the days not so long ago when science in general and mathematics in particular were regarded by many as a ‘boy’s subject’ or a ‘man’s profession’, dominated as it was in an exclusive fashion for far too long by men, much to the detriment of science and society’s loss.

While it is true that since 2015, when world leaders agreed the Sustainable Development Goals which emphasise the importance of education, gender equality and inclusive infrastructure, we have seen significant improvements globally from the perspective of STEM participation, yet a considerable gender gap still exists.

In most countries, while women represent a majority of all graduates from tertiary education, fewer women than men complete STEM university degrees. Less than 30 percent of researchers worldwide are women, and less than a third of all female students globally select STEM-related fields in higher education.

The statistics for Ireland are only slightly more encouraging than these global figures. On a headcount basis, just over 35 percent of all those engaged in STEM research in Ireland in 2016 are female, compared with over 50 percent in countries such as Argentina, Guatemala, Latvia, Lithuania, New Zealand, Serbia, Thailand, Tunisia and Venezuela.

Numerous studies published by UNESCO have found that women in STEM fields are paid less for their research, are given less opportunity to publish, face obstacles in progressing as far as men in their careers, often due to the non-recognition of the other roles that they may be fulfilling, for example in relation to family life; roles which are not regarded in the structure of scientific practice. Return to work, for example, after childbirth is often achieved at a cost to career progression.

In order to reduce the gender gap, we must go beyond quantification and identify those qualitative factors that at the very outset deter women from pursuing careers in STEM fields. For example, we know that early on in education assumptions in the learning environment play a role in shaping girls’ (and boys’) interest and motivation to study STEM subjects. Social bias and stereotypes then can later go on to affect girls’ and women’s progress and career choices. This in turn may lead to a perceived lack of female role models in STEM fields. We must ask are Third-level institutions and workplaces making enough of the necessary changes to accommodate female students wishing to pursue STEM studies? These are issues in which it is to society’s benefit that they be addressed urgently.

However, given all these challenges, it is important to recognise how Irish women in science are playing a courageous role in, for example, the battle against COVID-19 – whether it be on the frontline as doctors and nurses, or in laboratories developing vaccines and medicines to mitigate the virus.

Of course, even if insufficiently recognised, historically Ireland has had many women pioneers in science. Some notable examples include X-ray crystallographer and Professor Kathleen Lonsdale, Alicia Boole-Stott, a self-taught mathematician who was one of the first people to explore four-dimensional geometrical figures. Others include astronomers Agnes Clerke and Annie Russell-Maunder, Mary Parsons who helped her husband build a giant telescope and went on to be a founding influence in photography, botanists Cynthia Longfield and Phyllis Clinch, and astrophysicist Margaret Lindsay-Huggins, all of whom made significant contributions during times when the fields of science and mathematics were very male-dominated.

In our own time, internationally recognised scientists at the cutting edge include those such as Professor Susan McKenna-Lawlor, and what a contribution was made by women scientists in the area of health. Dorothy Stopford-Price became an acknowledged international expert on childhood tuberculosis, as well as founder and honorary secretary of the Irish League. She was the first to introduce the BCG vaccination to Ireland in 1937, vaccinating infants in St Ultan’s Hospital in Dublin. Her subsequent work with the vaccine helped its eventual rapid roll-out after the Irish Government adopted it in the late 1940s.

Today, such talented and inspiring women in science are not the exception, but many women are playing leading roles in so many areas of scientific endeavour.

International UN Day for Women and Girls in Science is thus an appropriate day to remind ourselves of the need to recognise the creativity and innovation of all women and girls by making a commitment to investing in inclusive STEM education and research and the re-structuring of career paths in science and technology in such a way that they do not exclude women and girls at any stage of their career.

Today, on the International Day of Women and Girls in Science, let us also not forget the bigger picture. Let us celebrate the benefits of greater equality in gender representation, not just in research and scientific endeavour, but in all aspects of society.

And today, my message to every young girl who is wondering if a future in science is for her, is to have faith; to take inspiration from the many talented women who have excelled in science and technology; to follow your passion, and let yourself be guided by the realisation that, through science, you can help in the solving of problems that impact millions of people, problems that have been allowed to persist for far too long.

Carry your knowledge and skills with pride, and in joining with those who have carried the torch of scientific insight and technological advances for the betterment of all, push on for the fruits of science and technology to be available to all, such as global access to vaccination as a global right and the most appropriate response to global pandemics. 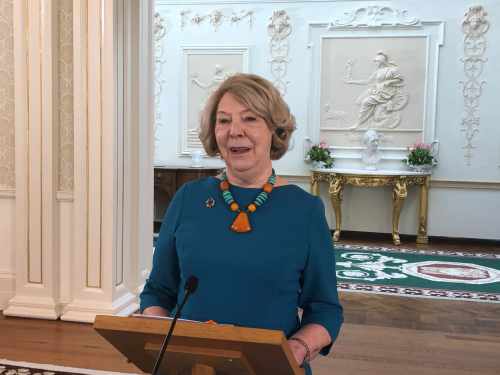