President hosts reception to mark the installation of Pangur Bán, a sculpture by Imogen Stuart, at Áras an Uachtaráin

Now, through Imogen’s vision and generosity, Sabina and I, the staff of the Áras, and the thousands of people who visit here every year can enjoy the vivid detail of this sculpture that brings the written material so sharply alive. We can be prompted to thought and reflection, and appreciate this unique opportunity to experience how a gifted creative in a contemporary age can interpret artistic works written in the past.

You are all most welcome here today as we gather to celebrate the arrival of this beautiful sculpture, Pangur Bán at Áras an Uachtaráin. May I commence by expressing my gratitude to Imogen Stuart, one of Ireland’s most respected artists, whose creative vision will so enhance this shared space here in the Áras.

Pangur Bán was, of course, inspired by the 9th-century poem believed to have been written by an Irish monk, somewhere in the vicinity of Reichenau Abbey in Austria, where the Benedictines, to this day, care for the original manuscript and who continue this monastic tradition which has had such a profound influence on the history and civilisation of Europe.

Indeed this poem and this sculpture tell us much of our European story: an Irish monk, living in Austria over a thousand years ago has his poem translated by an Englishman, Robin Flower, which in turn sparks the creative fires of a gifted sculptor, born in Germany, and living in Ireland.

This is the human condition. Our stories have always been intertwined. We have always travelled and lived amongst each other, sometimes returning, sometimes not, reinterpreting and re-framing each other’s experiences, as understood through our own perspectives; creating a shared narrative that in turn is to be re-worked and re-shaped by arrivals and departures and by the passage of time.

I am so glad that the ambassadors of both Germany and Austria could join us today. This is, of course, our shared heritage.

Imogen has so beautifully reflected on the work of this monk whose name is now lost to us, and whose words have been re-presented by Robin Flower. The text incorporated into the sculpture, reminds us of how words and art so emotionally and instinctively interact with each other.

At the heart of both the words and the sculpture is the concept of living and working in harmony. The writer tells us that:

while the artist makes her own aesthetic journey into that congruent space. It is, of course, a shared and enduring space, a creative collaboration between two artists separated by time and place and form, who speak quietly and harmoniously to each other across a distance of so many centuries.

Indeed, it is greatly inspiring to see how the work of one artist can renew itself through the imagination of another, re-imagined in a different age and re-shaped through the prism of a different experience and a different time.

It is also uplifting to witness how intuitively art and words can interact, relating instinctively to each other, kindred spirits. Through the great talent of Imogen Stuart, a poem written over a thousand years ago has been brought visually to life in this modern age remaining relevant to a new and very different audience to that which prevailed when it was first created.

Imogen is, of course, one of Ireland’s foremost sculptors and has been a much-valued member of Ireland's arts community for a very long time. Indeed, some years ago, I had the privilege of conferring on Imogen the Torc that signified her election as a Saoi of Aosdána, and on that occasion I remarked that I am always struck by how often, when Imogen Stuart´s sculpture comes up for mention in conversation among the many artists I have had the pleasure of knowing as friends, praise for her work goes hand in hand with a profound and moving affection for the artist herself.

That is a great tribute, but also a very well deserved one that reflects the generosity of spirit that defines Imogen Stuart the artist. Imogen has always demonstrated a sincere will to place her art, not in separate spaces for the elite, but right into the heart of society and community, to be enjoyed and appreciated by everyone.

Much of her art has been created for the Catholic Church – works such as the Penal Cross in Lough Derg, the water fonts at the shrine at Knock, the Stations of the Cross at Ballintubber Abbey, and the carved altar in the chapel of University College Cork, offering a quiet but uplifting backdrop to the spiritual lives of those who come to worship, seek succour or sit in silent contemplation.

Several generations of children have played around the Fiddler of Dooney statue in Stillorgan Shopping Centre, while Pangur Bán was for many years a natural part of the daily lives of shoppers in Dún Laoghaire and then later of the students who congregated around it in the Arts Block at University College Dublin. Imogen’s sculptures are also displayed in schools, hospitals and other public buildings, enjoyed in a spirit of community and togetherness while also, I have no doubt, speaking quietly to the imagination of many and inspiring other aesthetic journeys into re-imagined worlds.

Closer to our home, even before the arrival of Pangur Bán, Imogen had left her mark on Áras an Uachtaráin, with her own superb work on the portrait bust of Mary Robinson in the Francini Corridor, and also through her participation in the selection committee for the sculpture we had commissioned for the centenary of the 1916 Rising. Imogen’s experience as a sculptor was such an important element of that committee’s inspired choice of Dearcán na nDaoine – The People’s Acorn by Rachel Joynt.

The inclusive nature of Imogen’s art is greatly evident in Pangur Bán through the careful placing of the integral benches, which invite the public to become active participants in her work, rather than passive observers. Indeed, as we have seen in the video we compiled for today’s event, it was greatly impressive, when Pangur Bán was being installed downstairs, to witness just how much attention Imogen and her daughter Aisling paid to the positioning of each element including the benches, and to realise what an important component they are of this great creative expression.

It is a creative expression that we are so fortunate to have here in Áras an Uachtaráin, and I would so like to thank The President of UCD, Prof. Andrew Deeks and Ruth Ferguson UCD’s Art Curator for facilitating its relocation to the home of the President of Ireland. For over a thousand years, the story of the little white cat and his monk companion have entertained and instructed, each devoted to his craft, each acting out their instinctive and schooled natures in perfect harmony.

Now, through Imogen’s vision and generosity, Sabina and I, the staff of the Áras, and the thousands of people who visit here every year can enjoy the vivid detail of this sculpture that brings the written material so sharply alive. We can be prompted to thought and reflection, and appreciate this unique opportunity to experience how a gifted creative in a contemporary age can interpret artistic works written in the past.

So many moments in time slip quietly past, unrecorded and forgotten. We are, however, greatly fortunate to have the writers, the painters, the poets, the sculptors, who capture those singular incidents or images that clarify and define an important moment of epiphany.

To those imaginative and creative people, we owe a great debt of gratitude. Not only do they create something that is aesthetically beautiful and uplifting, but they also assist us in understanding our world and our place in that world.

It is also worth remembering the developer and patron of the arts Mr. Kish Kennedy, who developed some of Ireland’s earliest shopping centres including Stillorgan and Dún Laoghaire. It was he who saw the value in including public art in his developments and a man for whom Imogen, I know, had the highest regard.

The poem Pangur Bán has captured the imagination of so many artists. Translations of the poem into English have been undertaken by such literary giants as Robin Flowers, Frank O’Connor, WH Auden and, of course, Seamus Heaney. In more recent years, Pangur has been introduced to new generations through several illustrated books for children and his appearance in the animated film The Secret of Kells, where his owner “Brother Aiden” was famously voiced by Mick Lally.

We are in for a treat, I understand, and will have Pangur Bán sung in a short while by Imogen’s great grand-daughter Ramona Dineen.

I am also grateful to have with us today from Maynooth University  Prof. David Stifter, Dr Deborah Hayden and Dr Siobhán Barrett who have recited Pangur bán in the original sean-Ghaeilge, in modern Irish and Robin Flower’s English translation. They were most beautifully accompanied harpist Eibhlís Ní Ríordáin. We have also heard Uilleann Piper Nollaig Mac Carthaigh and will hear him again later. Mo bhuíochas Nollaig.

Let me also thank especially the enthusiastic work of our OPW colleagues who have embraced this project so enthusiastically and who have Pangur looking his best for display and also the staff from Áras an Uachtaráin who have prepared for our celebrations today.

But most importantly, today I am delighted to express such gratitude to Imogen Stuart. Pangur Bán, like all of Imogen’s work, speaks to us silently but profoundly, imbued as it is with a deep humanity and the life-enhancing spirit that makes her creations such a joy to experience.  It is such a pleasure and a privilege to provide a new home for the Pangur Bán, a home in which I can assure you it will continue to be enjoyed in a spirit of shared community and friendship.

We are honoured to receive this work today, and honoured all the more by the presence of Imogen who has made such a distinguished contribution to the cultural life of our nation. 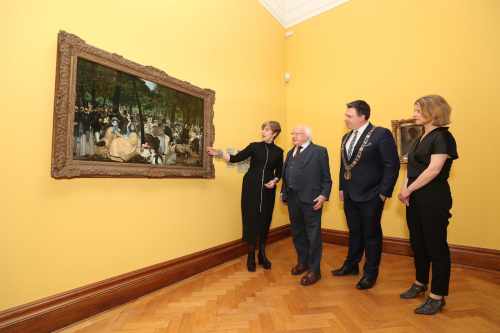 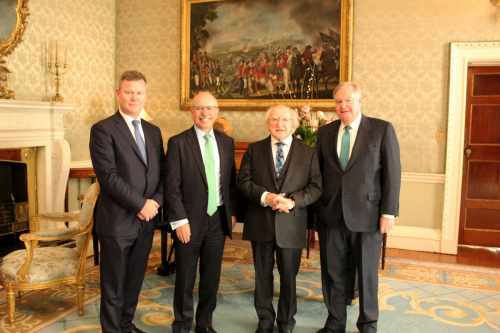