You are all most welcome here today to Áras an Uachtaráin.

On Sunday we mark and celebrate International Women’s Day. The theme this year is ‘Each for Equal’, calling on us all to remember our individual responsibility to contribute towards the creation of a fairer and more equal world.

[I am delighted to see here today so many people who have taken up that baton, breaking new ground and campaigning to craft a society which allows women of all ages, backgrounds and creeds an equal voice and an equal right to participate in and shape their society.]

2020 marks the twenty-fifth anniversary of the most advanced and wide-ranging strategic plan for the achievement of women’s rights in countries and regions across the world. The Beijing Declaration and Platform for Action remains a defining framework for change.

Its twelve critical areas of concern remain as relevant today as they were in September 1995, when 17,000 participants and 30,000 activists gathered in Beijing, united in their aim to progress gender equality and the empowerment of every woman in every part of the world.

Women’s rights, and how they can be fully achieved, is a question that challenges the fundamental structures and values of our society. If we wish to realise full equality between women and men, we can only do so by ensuring women are enabled to shape the policies and participate on an equal basis, in the decision-sharing, decision-making and implementing processes that define and underpin their own society.

As this twenty-fifth anniversary approaches, we in Ireland, along with our international community, will be reflecting on the progress that has been made and, even more importantly, challenges that remain to be met, since the drawing up of the historic document that is the Beijing Declaration.

There can be no doubt that significant progress has been achieved, such as gives reason for hope and optimism. There can equally, however, be no doubt that there remains considerable ground to be covered before we can claim the achievement of full equality between men and women in societies and cultures across the world.

The Beijing Declaration and Platform for Action brought strong political resolve and focus to the issue of gender equality. It united women’s movements on a global scale, and brought activists together in clear agreement on how to proceed in the pursuit of equity and empowerment for women. Since then, the promises made by the Platform for Action have been converted into real actions in many countries and regions, enriching and improving the lives of their female citizens.

May I make a special mention of Lavinia Kerwick who joins us here today. Lavinia is one of those rare and inspiring people who are exemplary in bravely sharing their difficult stories, often at great personal cost. They do so in order to change minds and policies, and thus create a better society for their fellow citizens. Lavinia chose to plant those important seeds of change in a space of hurt, vulnerability and isolation, in order that change might take place, that something strong and enduring might grow and flourish.

Lavinia’s generous courage has given victims of rape the right to have their voices heard at the time of sentencing, of describing in their own words the damage, fear and heartbreak they have suffered through the actions of the perpetrator sitting in the courtroom. Her brave determination has also ensured that the Director of Public Prosecution can appeal sentences for rape which they consider to be too lenient.

Today, more females than at any other time in history are protected by law against gender-based violence and live under constitutions that guarantee gender equality. Those victories were not easily won and we, as a society, owe Lavinia Kerwick an enormous debt of gratitude. She, and the many other women in Ireland and across the world who continue to challenge sexual violence and harassment, who initiate what are uncomfortable if necessary conversations, demanding change and justice, deserve not only our appreciation, but our solidarity and our support.

We have, in recent times, witnessed such solidarity through the coming together of many women in different parts of the world, to share their stories as victims of abuse and of the consequences of the imbalances of power. Those stories have been a salutary reminder too that no society, no matter how nominally ‘advanced’, is immune to harmful regressions in the areas of rights painstakingly won. The lesson is clear. It is that we must never let down our guard, be willing to confront not just violence but prejudice and disrespect wherever it arises.

The number of women serving in political office in some parts of the globe is unprecedented – in Rwanda for instance, nearly two-thirds of parliamentary seats are held by women; in Namibia, South Africa, Senegal and Mozambique at least 40% of parliamentarians are female, while in the European Parliament women now comprise 40.3% of MEPs.

This is encouraging news. We must not lose sight, however, of the fact that recent statistics show that less than a quarter of all parliamentarians are female, while globally there are twenty-seven States in which women account for less than 10%.

Then, too, when it comes to income, across the globe women continue to earn 63% of that earned by men, a gap the World Economic Forum estimates will take over two-hundred years to close at the current pace of change. Women not only earn less than men, but also own less property, leaving them highly dependent and vulnerable to poverty and abuse. Indeed, a third of women will suffer physical or sexual violence in their lifetime. It is also of great concern that 800 women die in childbirth every day, an unacceptable figure in this modern age.

[While women’s rights continue to spread and strengthen around the world, there remains much work to be done as we continue to progress the Beijing Declaration.

Here in Ireland, as we reflect on the twenty-five years that have passed since the Declaration was adopted, we can see its profound influence on the development of gender equality legislation and frameworks of policies and actions related to the National Women’s Strategy]

We have witnessed a steady increase in the numbers of women engaged in paid work, significant advancement in the educational achievements of women and girls, and enhanced legislation designed to prohibit discrimination in employment, and in service provision and access, on the basis of gender.

At a societal level, violence against women is no longer justified and tolerated as a private family matter, confined to the home and outside of the remit of public bodies of the State. Across all national policies gender impact is considered and monitored and it is now accepted that the participation of women in public life is critical to the empowerment of all women and to society as a whole.

There is therefore, as we survey progress in the last twenty-five years, reason to be optimistic. That progress, however, has not been even, and our journey towards the achievement of full equity between men and women is far from completed.

For example, while women have made considerable advances in terms of participation in third-level education they remain considerably underrepresented in politics, on state boards, at senior levels in public and civil service, and in many other areas of decision making and policy formation. In higher education, approximately three-quarters of Professors are male despite women comprising over half the workforce in that particular sector.

Despite advances in educational attainment, we have yet to fully break down traditional and stereotypical career expectations for girls and boys, and support unbiased subject and career choices. Women remain significantly underrepresented in STEM-based careers, which are not only important drivers of Ireland’s innovation, sustainability and competitiveness, but will also shape the industries and work of the future. Women are more likely than men to work on a part time basis and in areas which tend to be feminised globally, such as office, clerical and care work.

Such discrepancies can no longer be attributed to the absence of qualifications, relevant skills or ambition amongst women, but rather to the many barriers that exist to their full participation in the workplace – including a lack of affordable childcare and an absence of the real flexibility in many organisations that would enable women to realise their professional potential.

Beyond the workplace, the significant caring work undertaken by women continues to be greatly undervalued in our society, and is a significant factor in the lower economic status of women in this country.

While awareness of gender-based and sexual violence has undeniably improved, the prevalence of violence against women remains a grave cause for concern. Equally concerning is the finding, in the Pavee Point Joint Shadow Report to UN CEDAW Committee, that Traveller and Roma women are among the most marginalised and excluded individuals and groups in Ireland today.

May I at this point acknowledge the important work of Dr Sindy Joyce, a great human rights activist, who is not only the first member of the Travelling community to be awarded a PhD, but also the first to be appointed to the Council of State. Dr Joyce’s research into the institutionalised stereotyping of Travellers amongst the settled community, and how it affects their use of what are meant to be public and shared spaces, gives us much sobering food for thought.

I welcome Dr Sindy Joyce here today, along with her fellow Council of State members Sinéad Burke, and regret that due to unavoidable circumstances Dr Mary Murphy and Dr Cara Augustenborg have been unable to join us.

A quarter of a century has now passed since that seismic moment when thousands of women gathered in China to agree an agenda for women’s rights and empowerment. It was to be a moment that would signify a critical turning point in our global struggle for gender equity and justice.

As we approach the fifth anniversary of the Beijing Declaration and Platform for Action, we must renew our commitment to increasing women’s participation in decision-making, challenging societal norms and values, and confronting deep-rooted prejudices as we work to achieve a global vision of full gender equality.

2020 also, of course, marks the twenty-fifth anniversary of the adoption of the Sustainable Development Goals by the United Nations. Goal Number 5, which calls on all nations of the world to, “achieve gender equality and empower all women and girls”, is a further articulation of global commitment to the achievement of full gender equality, building on and emphasising the commitment made by the Beijing Declaration. It highlights gender equality as both an objective in itself and a requirement for achieving all of the development goals, underlining further the vital role of all those who challenge societal norms and values and confront deep-rooted prejudices against women.

[It is work that so many of you here have been undertaking with determination and generous passion for many years, campaigning actively for the rights of women in Ireland and around the world. I thank you for that important work, and for all that you have achieved to date.]

I also thank you for coming here today and wish you all every success as you continue with your important endeavours. 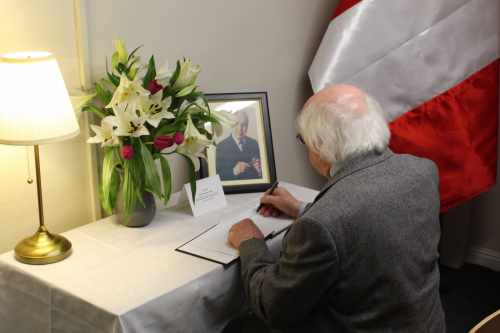