As President and thus as Supreme Commander of the Defence Forces, I am very pleased to welcome you here today and to have this opportunity to personally acknowledge the central role played by Óglaigh na hÉireann at my recent Presidential Inauguration.

The very special atmosphere in St Patrick’s Hall and the wider environs of Dublin Castle was greatly enhanced by the presence of the collective ceremonial elements of the Defence Forces and the professional performance of the members of the Defence Forces School of Music that have added so much to the occasion. I thank you all on my own behalf and on behalf of the people of Ireland for your continued dedicated professionalism.

It is, of course a professionalism I have been fortunate, as Uachtaráin na hÉireann, to witness on many occasions. The Defence Forces have played, and continue to play an important role in many ceremonial events across the country, including State Visits to Áras an Úachtaráin, bringing to each a distinction and dignity of which our country can be very proud.

This year we also, of course, marked the 60th anniversary of Ireland’s involvement in United Nations’ peacekeeping missions. In June I attended an official State ceremony in Dublin Castle to mark this important anniversary and to pay tribute to those who have served in the name of Ireland, in particular those who lost their lives or were seriously injured in the service of peace.

Recalling Ireland’s long and well-respected history of participating in peacekeeping missions was a very proud moment indeed. Few nations in the world can say that their peacekeepers have stood at so many UN posts across Europe, Asia, Latin America, Africa and the Middle East, every day for sixty years.

Today, your service overseas continues with some five hundred and sixty-five personnel currently serving throughout the World. You have made an indelible mark on many Nations and their peoples.

Your record of service is a matter of great pride for the people of our country and today 682 Defence Forces Personnel serve in thirteen countries and on sea across the world.

I am acutely aware that Defence Forces personnel have to operate in often difficult and challenging circumstances while on service overseas and that some of your colleagues have paid the ultimate sacrifice in the line of duty. Today, with sadness, we recall again the 87 members of the Defence Forces who have lost their lives on Peacekeeping missions, so that others could know the gift of peace.

Here at home our citizens are also profoundly grateful for the essential support provided by our Defence Forces during times of emergency or great difficulty. Your expertise, practical assistance and generous spirit of solidarity has so often come to the aid of citizens and communities dealing with unexpected and often devastating forces of nature that threaten to wreak havoc and destroy livelihoods.

During the serious flooding in recent years army personnel assisting with flood defence, mobility and clean up tasks around the country became a regular and greatly reassuring sight on our television screens and in our newspapers.

More recently, the very practical assistance provided by personnel during Hurricane Ophelia and Storm Emma included the transport of emergency staff and dialysis patients for the HSE, provision of high axle vehicles to assist the Local Authorities and the ESB, the transportation of volunteers to deliver meals on wheels, the evacuation of people from stranded cars and isolated homes, and so many other services that kept our people and our communities safe and secure under difficult circumstances.

You were also called upon at the peak of the severe drought conditions in the summer when the Air Corps provided assistance to the emergency services fighting gorse and forest fires. This assistance was provided over a five-week period principally across the Eastern and Southern region but also to the emergency services in Counties Antrim and Down.

It is at such times of crisis when our communities and families are vulnerable and feeling at risk that the physical and sometimes emotional assistance provided by the women and men of Óglaigh na hEireann is so valuable and greatly appreciated. Indeed, it is often the provision of this very tangible and practical support that affords an opportunity for our citizens to directly interact with our Defence Force personnel. I would like to assure you that the assistance you provide so willingly is greatly appreciated by the communities you have so generously supported during times of great trauma.

As we continue to progress through the “Decade of Centenaries” we are remembering and reflecting on the story of our nation which encompasses major historical happenings from 1912 to 1922.

Since the start of this decade, I, along with members of the Government and many citizens of this country, have had the privilege of participating in numerous remarkable and moving ceremonies commemorating the key events that took place 100 years ago.

I recall with great pride in particular the many commemorations in 2016 to mark the centenary of the most pivotal year in modern Irish history. Our citizens and our diaspora came together to celebrate our independence and take pride in the richness of our history and our unique cultural identity and heritage. The common element in all of these events has been the presence of members of our Defence Forces. You have played an essential role in our national commemorations. You have displayed at all times your customary dignity, pride and respect. The solemnity that Defence Forces personnel provide at State commemorations has demonstrated the professionalism and high standards that the Defence Forces apply to all of its roles and missions.

Before I conclude may I say how acutely aware I always am at this time of year of the many Defence Force personnel who will be separated from family and friends over Christmas in order to serve at home and abroad. That is a great and generous sacrifice by them and their families that I can assure you is greatly appreciated by the people of Ireland.

We also appreciate the valuable contribution you make to the cause of peace and justice across the globe, and for providing security, defence and support to the people of Ireland 24 hours a day, 365 days a year.

I thank you all once again for coming here today and for the valuable contribution you made to the Presidential Inauguration, a contribution that I personally so greatly welcomed and enjoyed.

Finally, may I thank all those who have helped to make today such an enjoyable and memorable event, especially those who provided such beautiful music - Daniel Dunne, Darren Hatch, Ciaran Sutton and
Ian Finlay, our first-aider friends from the Civil Defence, and all the staff here at the Áras who have all worked so hard to make today a success. 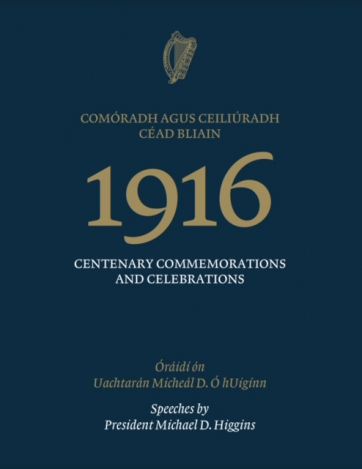 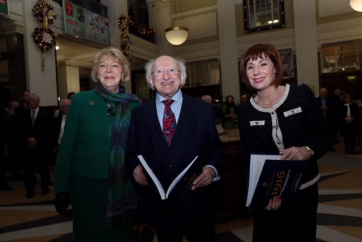 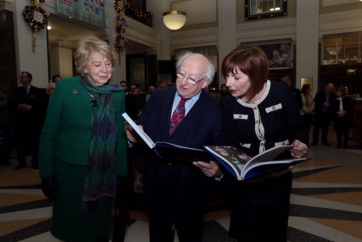 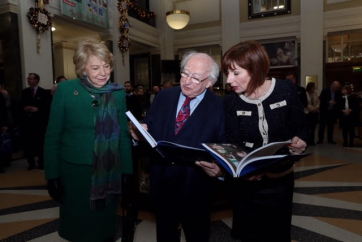 President attends a reading by Eavan Boland, to mark the centenary of women’s suffrage