The United Nations must be our United Nations. It will only be successful in pursuing our common objective of sustaining peace if we, the Member States, re-commit to its founding principles to which we dedicated ourselves 75 years ago.

When the United Nations was founded 75 years ago, the small number of founding members were anxious that the actions which had brought humanity to the nadir of cruelty, torture and war would not be repeated.  When the newly independent countries of the UN joined, a new world that was post-imperialist was envisaged.

Above all, the UN was, in every period, a forum for advocating and achieving peace. The United Nations has not achieved what was for many a peaceful, interdependent world, but we should regularly reflect on what this world might have become, through the abuse of power, had the UN not existed.

As we meet, the UN remains our best prospect for peace, for united action on issues we share. The UN and its agencies continue to be under attack, be it through underfunding, withdrawal of support, or the often-explicit promotion of a theory of interests by the most powerful as an alternative to the multilateralism which the Charter of the UN demands.

The United Nations remains the only body through which all nations can work cooperatively to end conflict, eliminate poverty, combat climate change and uphold human rights.

It is an affront to humanity that, in these first decades of the twenty-first century, at a time when we have ample capacity to abolish all forms of human poverty, we share a planet with hundreds of millions of people who, even as we speak here today, are locked in avoidable hunger and diseases, deprived of their most fundamental rights, deprived of a dignified existence.

In the last 50 years, we have lost two-thirds of our ecological diversity, a terrible legacy from our generation. Achieving the success of the Sustainable Development Goals is not an option for us anymore, it is the condition for our common survival.

Our intellectual and ethical capacity is being surrendered. We have resiled to a politics of fear rather than to the emancipatory promise of the politics of possibility. We have come to lose not only the discourse of peace so invoked by the UN Charter, but so much of what was universal in its aspiration and implication, including what are the inevitabilities of connections between ecology, economy and society that serve as impediments to our realising a new paradigm of sustained peace and development.

These regressive trends have been reflected upon with great insight in what is arguably the most forthright statement by a United Nations Secretary-General in recent years. Dr Guterres spoke in July this year, at the Mandela Annual Lecture, of how COVID-19 has laid bare that which we had neglected and sought to hide in terms of avoidable global poverty, hunger and environmental degradation. COVID-19 has reminded us in the most tragic and often cruel way of our interconnectedness, and of the urgent need to cooperate at the global level in the face of common challenges.

Secretary-General Guterres’s words represent both a devastating denunciation of the most serious breaches of faith on the part of the most powerful nations of the world, and at the same time a coherent agenda as to what must be addressed if we are to see progress on the key multilateral issues: the reduction of corrosive inequalities; a robust opposition to a renewed racism that has not eschewed the legacy of colonialism; an unfair international trade that represents little less than a new colonialism; and the urgent need for reform of the Bretton Woods Institutions, such as the IMF and the World Bank.

The United Nations must be our United Nations. It will only be successful in pursuing our common objective of sustaining peace if we, the Member States, re-commit to its founding principles to which we dedicated ourselves 75 years ago. To achieve this, we must ensure that the emergence of new thinking and new paradigms of critical thought, which are so urgently needed, are allowed to emerge and flourish.

Our choice has become clear and stark: to seize a new moment for global solidarity, or seek to hide in the thickets of a systemic failure that is failing the bulk of the world’s people and that has brought our planet to a point of ecological catastrophe.

Now is the time, not only for all world leaders, but global citizens, to make common cause and commit to respond to the plea of the United Nations Secretary-General that we devote ourselves to the cause of a universal peace; that we eschew the language of fear and divisiveness in favour of a language of hope, solidarity, sensitivity, care, compassion and kindness; that we make a positive, lasting contribution for the betterment of our peoples and our shared, vulnerable planet. 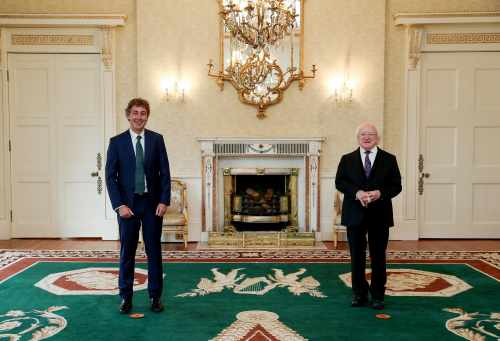