President co-hosts, with the Prime Minister of Fiji, a reception for leaders from Small Island Developing States

It is a great pleasure to be here this evening on the eve of the summit on Small Island Developing States’ mid-term review of the Samoa Pathway which Ireland and Fiji are co-hosting.

I welcome the opportunity to meet again with the representatives of Small Island Developing States and low-lying coastal states and communities, of having the opportunity of building on our conversations in New York last year, and of course resuming the conversations we had in Dublin in June this year when I had the honour of hosting ambassadors of Small Island Developing States, thus further deepening the bonds between our island nations.

Tomorrow we will learn of what progress has been made in addressing the priorities of Small Island Developing States through the implementation of the SAMOA Pathway. I hope we will hear of efforts to mainstream climate change action into development strategies and disaster risk reduction activities, and that we will be offered new measures that will result in additionality.

Islands, as we all understand only too well, are inherently vulnerable. This vulnerability has left island communities and low-lying coastal communities open to, not only the forces of nature but, often in considerations of strategic location that ignored their peoples, to the ravages of expansionist and acquisitive empires. Today the shared island experience is happening within a context of a financialised global economy with its specific pressures, threats that are now perilous from climate change and its consequences which are largely sourced in what are described as ‘developed countries’. In facing these new challenges, I believe that a shared, concerted, determined strategy within the multilateral institutions and in diplomatic practice is a vital tool. That is surely the raison d'être of the SAMAO pathway itself.

In the history of the UN, it has often been the nations with the smallest populations which have been the ones that have performed as partners in advancement of the common good, the needs of humanity that transcend all borders. The UN flourishes when such voices are heard. A UN that confined the moral purpose of its Charter to discussions and decisions at the General Assembly and then proceeded to ignore those voices of the world, voices that define the purpose of the UN, would quickly and understandably lose. We must safeguard the UN from such a fate of impotence. The General Assembly and its decisions must never be dismissed in favour of the pursuit of the interests of the strong, something which happens always with damage to the reputation of the UN at the Security Council.

When the UN turns its focus to creating a transformative agenda, as it did through the Sustainable Development Goals, member states such as Ireland are called upon to lead. Countries of small populations but principled nations, such as ours and yours, have the ability to work together to build consensus and support, based on identifying the collective good and rising above any narrow priorities based on self-interest or impulses to dominate, to control a discourse that must, after all, be a discourse of the many.

May I suggest that your deliberations tomorrow focus on climate change measures that demonstrate verifiable additionality, and may I also remind us not to lose sight of the need to focus discussions on measures to achieve the more stringent global warming target of 1.5 degrees Celsius, for this is our objective if we are to avoid the catastrophic impacts of climate change on Small Island Developing States.

May I wish you all a stimulating and productive summit, one that develops and enhance the linkages between our islands, one that focusses on concrete multilateral actions, as we continue to work together in playing a strong role as we tackle the enormous challenges facing us in the coming decades. 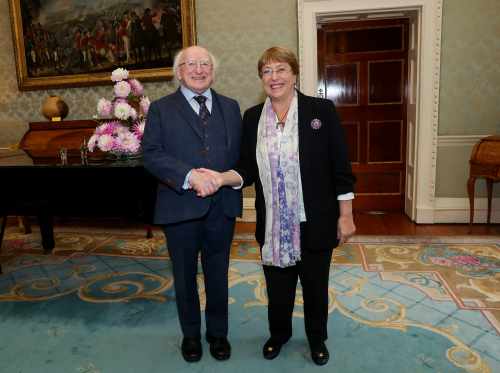