Speech by President Michael D. Higgins at an event at Áras an Uachtaráin celebrating Women Entrepreneurs Friday 4th May 2018

May I welcome you all here today to Áras an Uachtaráin, in a very special year, 2018, the centenary of women winning the franchise, and indeed our meeting today is to further acknowledge the contribution of women, not only to our independence, our culture, our society and our economy, but also to continue the undoing of the marginalisation of women.   It is, of course, 50 years after the great human rights and civil rights movements of 1968.   Your presence here this evening is particularly to celebrate the contribution of women entrepreneurs to our society and our economy.

[As I look around me I am greatly impressed, not only by the number of entrepreneurs in the room, but by the wide and diverse areas in which you have chosen to set up enterprises. It is an uplifting reminder of the depth of the entrepreneurial talent that is developing and flourishing in our country.]

En passant, may I congratulate Norah Casey who has just returned from India after receiving Woman of the Decade Award from the Women’s Economic Forum, and the legendary Anna May McHugh is with us accompanied by Anna Marie.

I realise that I am speaking to those who have achieved a success, people of talent, extraordinary skill, and indeed patience, in achieving their success, often one against the tide.

For the success of Ireland’s indigenous economy, the continued development of entrepreneurship is vital. It is also a critical factor in job creation, in responding to economic challenges and in finding sustainable solutions to overcoming social exclusion.

Last year, Sabina and I hosted another gathering like this for women working in the fields of science and technology. We did so because we are both deeply concerned by the fact that women are greatly underrepresented in the higher levels of the fields of science and technology, with an estimated six to seven percent of technical positions across Europe being filled by women.

Science is such an important and influential discipline – one which has a pivotal role to play in the great concerns of humanity in our time, and one which has the potential to make the greatest contribution to improving our world – and yes, it is so welcome that so many girls are now taking science but as careers are interrupted for family or social reasons so many considerations prevent career resumption at an appropriate level.  There have always, throughout our history been courageous women who raised their voices, insisted on being heard, amongst them brilliant scientists, and in doing so changed the world.  That is why we must keep asking ourselves why are we losing so many women in science at the advanced level and why it is that society is being denied the intellectual contribution of so many who could be, but are not, in the world of science?

In Ireland, as across the world, the exclusion of women has led to the impoverishment of our public policy and our body politic, and resulted in too many lives which were not allowed to achieve their potential merely because of their gender.

A defining change in how the international community addresses issues of equality can be seen in the way the relative position of women in society and women's rights are now conceptualised as a universal human rights issue.

Gender equality is now being recognised as a central concern at a global level, not just in areas traditionally associated with the women’s rights movement, but these gender equality concerns have been stitched into the core fabric of international agreements that go to the heart of our future existence on this planet, no more so that Sustainable Development Goals which were agreed in New York in 2015.

We should all rejoice at the fact that gender equality was tackled in that agreement both as a transversal issue and as a specific Goal – Goal number 5 – which calls on all the nations of the world to:

“Achieve gender equality and empower all women and girls”.

This is an overdue admission that the exclusion of women damages all of society, forfeits a vital source of intelligence, a form of discourse that is valuable, inclusive and collegiate.

It is, of course, one thing to agree to tackle inequality but quite another to change the sometimes-ingrained practices and attitudes that serve to perpetuate a pattern where women are less empowered or less well represented than their male colleagues.  While this has been recognised in the world of political representation, and there is still a long way to go, there are considerable changes in the corporate world that have to be addressed.

It is not only the occupancy of senior posts and posts of decision-making in which female participation has to increase, the very culture of decision-making at all levels, both state and corporate, would benefit from greater female participation, both in the achievement of results and the atmosphere created in necessary dialogue, and the achievement of consensus.

Of course, at a most basis level this last year, women’s rights were to the fore of the public discourse. Sexual abuse and harassment in the workplace was openly discussed and confronted across a range of high profile sectors including the film industry, politics and the media. We should not have had to come to such a pass for women’s voices to be heard and demands for change in behaviour and attitudes must continue to be progressed for the benefit of all society and at all institutional levels in every sector.

This centenary year is a year during which we reflect on the women who refused to accept a world where they were considered of less importance, and to have fewer rights, than men. I think, for instance of women such as Constance Markievicz and her sister Eva Gore-Booth who were so courageous and determined in their pursuit of women’s suffrage.

Eva Gore-Booth, who has been so well served by her biographer Dr. Sonja Tiernan, established herself as the voice of the working classes in Manchester and across the UK.

Eva Gore-Booth’s legacy lives on in many ways but we can see it too in the continued and growing support for International Women’s Day which we celebrated in February. International Women’s Day was of course, an initiative of the International Labour Movement back at the start of the last century.  In fact, it originated as an initiative of the American trade union movement in 1909 precisely because the labour movement understood that workers’ rights and women’s rights go hand in hand. It was true then and it remains true.

For too long during our 100 years as an independent Irish State, the voice of women in Irish political life was marginalised, ignored or silenced.  The election and appointment to cabinet of Countess Markievicz was a false dawn.  It would take almost six decades for a second woman to be appointed to serve in an Irish government.

Today, women continue to face barriers in many areas of modern life, including the right to full and equal participation in the labour market. Those barriers include a widening gender pay gap, a lack of affordable child care, and an absence of real flexibility in many workplaces to enable women to fully reach their professional potential. We also know that while much more could be done to support and assist women who are considering returning to work after breaks for child-rearing.  There is, of course, a vigorous debate now on the forms of economy that will prevail in a society that is ever-more technological.  The best of that work recognises that work itself needs redefinition, for example to include work of care by both genders if we are to achieve a cohesive society.

When it comes to entrepreneurship here in Ireland, women make up just twenty percent, or one in five, of all of Ireland’s entrepreneurs. Research would suggest that, while Ireland has all of the right conditions for businesses owned and led by women to thrive, motivation and self-belief continues to be a significant limiting factor.

The news is not all negative, however. The OECD and the European Commission have stated that while Ireland has a supportive regulatory environment for entrepreneurship, more can be done to support women entrepreneurs through tackling gaps in access to services and in social protection. This includes, as I have already said, increasing the availability of childcare, and providing additional support for women who seek to develop and grow their businesses.

You are paving the way, providing inspiring role models for the many other women in this country who have the talent to set up successful businesses. You are women who create employment, export opportunities, and a working environment that is supportive of other women.

One hundred years ago, women smashed windows in order to highlight a gross inequity in our society. Today many women find themselves being confronted by glass ceilings in their places of work, ceilings that deny them equality in the workplace; deny them access to the same promotional opportunities, pay and respect that is accorded to their male counterparts. As a country that aspires to be a true democracy we owe a great debt of gratitude to women like you, who continue to break down the barriers and overcome the obstacles that prevent women from being equal participants in all aspects of society. I thank and commend you for that.  May I at this point also thank the staff of Enterprise Ireland for their assistance in helping us organise this special event this evening.

I thank each and every one of you for your entrepreneurial spirit, your determination and your vision which have helped to not only build your own success stories, but are also contributing to Irish society. Your willingness to innovate, take chances and turn dreams into realities, are a greatly inspiring example of the qualities that are necessary in all areas of our shared lives if we are to craft, together, a future of hope and possibility.

[A successful entrepreneurial society built on creativity and excellence can generate a range of economic, social and personal benefits which are so important as we look to ways to build a society on a sustainable, ethical foundation.]

Sabina and I are delighted, therefore, to have this opportunity to acknowledge and celebrate your contribution to both the economic and the social dimensions of our society.  Thank you for joining us here today and I wish you all every success as you continue with your important work. 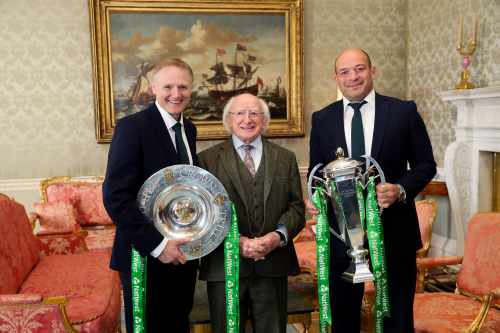 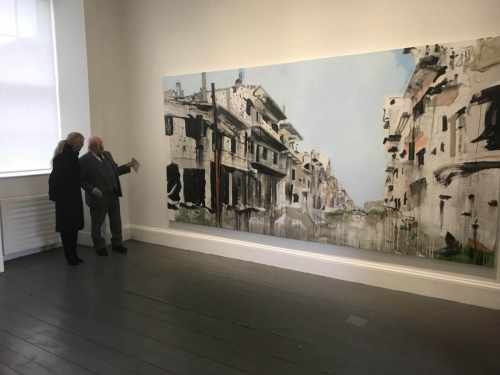