Speech at a Garden Party to mark Bloomsday

As we celebrate Bloomsday, we are reminded of the power and impact of great artistic works, of how they reflect back at us the society and era in which they were created, and move and navigate us through time and place and myriad complex thoughts and emotions. They challenge us and dare us to contest and critique the norms of the societies and age into which we have been born.

You are all so welcome here this afternoon to Áras an Uachtaráin as we celebrate this most important day on Ireland’s cultural calendar.

The 16th June marks, of course, the date of Leopold Bloom’s iconic ramble around Dublin on a Summer’s day in 1904. Over a century later Bloomsday is a day when we celebrate not only the great talent of James Joyce, but also the great talent of so many creative citizens who do so much to enhance the culture of our society.

Bloomsday has indeed become an integral part of our cultural fabric, a day when Irish citizens come together to celebrate Joyce’s great legacy, in particular his masterpiece Ulysses in which Joyce, in his own words, aimed to create

“a picture of Dublin so complete that if the city one day suddenly disappeared from the earth it could be reconstructed out of my book”.

That aim was, of course, achieved in Ulysses which maps Dublin so beautifully and so accurately in all its light and shade and darkness, enabling generation upon generation to experience Leopold Bloom’s epic walk through our capital city on that Thursday in June one hundred and fifteen years ago.

Over a century later, as we celebrate Bloomsday, we are reminded of the power and impact of great artistic works, of how they reflect back at us the society and era in which they were created, and move and navigate us through time and place and myriad complex thoughts and emotions. They challenge us and dare us to contest and critique the norms of the societies and age into which we have been born.

Many decades have passed since Joyce’s Ulysses immortalised the Dublin of Summer 1904.

Today we inhabit an Ireland different in many ways from the one inhabited by Leopold Bloom. But it is an Ireland built on our shared past, a past with which Joyce reunites us, bringing us back into the contemporary moment with new insights and understandings.

Ireland owes a debt to James Joyce. In describing Ulysses, he once said:

“I’ve put in so many enigmas and puzzles that it will keep the professors busy for centuries arguing over what I meant, and that’s the only way of insuring one’s immortality”.

We should not ever let the gift to literature, life and Dublin deflect us from the preceding or succeeding work of James Joyce. His was not a one-work contribution.  Above all it was a life paid as price for an immortal gift, the work left to world literature and us all last year I said:

“We must never forget on Bloomsday the person, the family, and the sacrifices that gave us the ground-breaking literary inheritance that is celebrated all over the world.  Ireland owes a debt to James Joyce”.

Last year I had the opportunity to lay flowers at the grave in Flaunter, where Joyce has rested since 1941, later joined by his wife Nora Barnacle and other members of his family. It was a greatly moving moment, allowing me to pay a silent tribute to a man whose genius has echoed across the decades and generations that separate us from June 16th 1904, and whose creativity continues to influence, to challenge and to transform.

There can be no doubt that Joyce’s immortality is ensured, his name forever etched into the cultural life of a nation from which he remained exiled for most of his life but where he is today celebrated as one of our greatest ever writers.

As a society we can be deeply grateful to those great creatives who play, or who have played, such an important role in and thus in our democracy and in our culture.  Bloomsday 2019 would have been Deirdre O’Connell’s 80th birthday.  Here in the Áras we celebrate Deirdre, the Focus Theatre and the Stanislavsky tradition, and earlier we planted a tree in the gardens at Áras an Uachtaráin on her 80th birthday.

I am delighted to welcome today so many guests who continue to make such a profound contribution to the important and constantly evolving area of the arts that is Ireland’s television and film industry and how appropriate this is when we celebrate James Joyce and his work.

I read earlier today Declan Collinge’s beautiful piece on his grandfather, Lennie Collinge, who was projectionist in the Volta at James Joyce’s cinema at 45 Mary Street, which would show films in French and Italian in December 1909.  So, you are a community that are connected through all your efforts, successive or otherwise.

Film and television have a rich history, peopled by a talented and intrepid community who push boundaries, transform the way we view the world, enable us to reclaim and understand our past, provoke debate, stir our neglected imagination, and challenge our perceptions and how we understand our world.

When I became Minister for Arts, Culture and the Gaeltacht it was my privilege to re-establish An Bord Scannán in 1993.   Bord Scannán na hÉireann/The Irish Film Board made a significant, and indeed crucial, contribution to Irish film making culture and activity.

Today, a new generation has grown up in an Ireland where a career in film or television is no longer an unattainable ambition or a career to be pursued by a fortunate few.  It is now an area of creative and commercial achievement open to so many highly skilled, creative and innovative people whose talent attracts producers from countries around the world.

May Screen Ireland continue to provide Irish film talent with the opportunity to develop and produce a rich variety of innovative and artistically courageous projects and may more and more Irish films receive the recognition and critical acclaim abroad that is now happening.  May I thank Screen Ireland for their assistance in organising today’s event.

Ireland has been described in the trade literature as a ‘capital of filmmaking and as ‘one of the world’s most attractive production environments’ due to the many gifted directors, writers, actors, producers and technical crews who, by the quality of their work, are doing so much to enhance our reputation on the international stage.

The audio-visual content production sector has an annual turnover in excess of a billion Euro and provides employment to over ten thousand people and while these are impressive figures it is important to emphasise, in policy and access, that the arts are not viewed as merely a tool of tourism or commerce.

The arts have their own integrity and independence, are an essential component of a democratic society, and make a profound contribution to that society, to our identify that is ever evolving and to our international reputation.

Those of you who work in these sectors and those of you who facilitate it are critical to the infrastructure of a creative, inclusive and participatory citizenship.

I thank you all, therefore, for all you do in so many ways to bring the enriching joy of arts and culture into our lives, working to ensure that everyone receives the right to engage in the cultural life of our nation.

So, today is a great celebration of creativity in its many different forms. It is a reminder of the many great creative talents we, as a nation, have been gifted with and today, especially, of those who contribute so much to the art of film and television.

Sabina and I appreciate the enthusiasm with which you have partaken in this special garden party and our wish is that, on this fine summer afternoon, you continue to enjoy ourselves.

May I conclude by thanking all those who have come here this afternoon to play music, perform and read and what a programme it has been, put together by the curators of today’s event –We have had David O Connor, Margaret Twomey and Eileen Fennell, the Carndonagh Brass Band, Colm O’hArgáin, Brenda McSweeney, Noel O Grady, John McCourt and the Trieste Ensemble, Steve Wall, Rosemarie Rowley, the Frank and Walters  and our wonderful MC Fiachna O Bhraonain.

For the quality of the superb sound, may I thank Dee Rogers and his team.

A big thank you, also, to the staff here at the Áras, to our friends in St. John of God’s, the Civil Defence, the Gardaí, our volunteers from Gaisce and the tour guides and all who have worked so hard to make today an occasion of friendship and joy.

Go raibh míle maith agaibh uile as ucht a bheith linn tráthnóna. Bainigí sult as an chuid eile den lá. Enjoy the rest of your time here and thank you for coming. 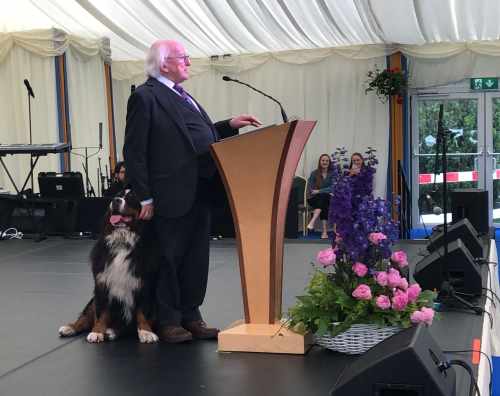 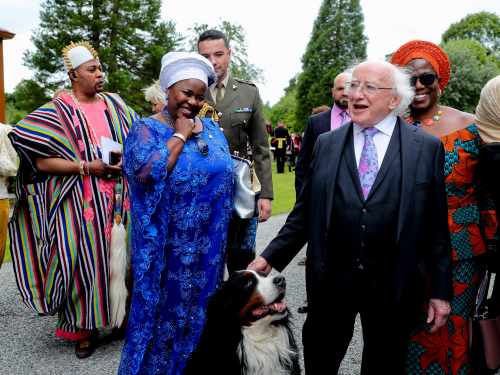