Speech at a Reception for the Cork Camogie Team

Your experiences and achievements will serve to inspire the imagination of others, making you inspiring role models for Ireland’s young women.

Ladies and Gentlemen, Dear Friends, and of course, our Cork Camogie Team – 2018 All Ireland Winners! I am delighted to warmly welcome you to Áras an Uachtaráin this afternoon.

On behalf of everyone who loves sport, everyone who followed with great interest and pride the exciting and exhilarating All Ireland Camogie Final between Cork and Kilkenny in Croke Park last September, it is both a great pleasure and an honour to join with you and celebrate Cork Camogie Team’s marvellous achievement in winning the All Ireland Camogie Final, one of the largest sporting events in Ireland.

The 2018 All Ireland Camogie final was a most memorable and truly thrilling game from beginning to end, and this was most evident to me at the time, not only in the final heart-stopping moments of the game when Orla Cotter remained calm and composed under pressure to score the winning point that secured Cork’s fantastic win, but I was also struck by the great teamwork. This would not be possible if not for the dedication and commitment that you have all given and the hours of training, often in very cold and inclement weather that this beautiful country of ours offers us.

Teamwork and unity are, of course, paramount in our everyday lives but it also strikes me how wonderfully typical the family connections in Gaelic games are and I am delighted to see that great example in the Murray family - with Aoife Murray (Goalkeeper and Captain), Paudie Murray (Manager), and Kevin Murray (Selector); a truly winning combination!

It was very clear to me on that exciting All Ireland Final Day in September that yours is a team of great unity and mutual respect, always encouraging and championing each other.

Each and every one of you deserve a special mention for your outstanding contributions and achievement and I would like to commend you all for the great example you are to our young people.

Leadership, working as a team, and respect for others are important themes of Gaelic Games and indeed of all sports, and these are qualities that translate right across into community work and everyday life regardless of where you live.

The members of the Cork Camogie Team possibly know more than anyone else that in sport there is never certainty about the outcome, there are no certain winners, but there are always courageous and committed athletes. That is part of the challenging journey each participant in sport must travel, one of the challenges they face and overcome again and again, and it does not get progressively easier.

All of you know only too well how tight the margins are between winning and losing, at the level of competing in excellence, how much courage it takes to face up to those margins, to accept the risks, to commit to the ethic of competing, of being tested rigorously and accepting the outcome whatever it is.

We are very proud of you and are very grateful to you for going the distance in your training and participation, making so many sacrifices, to be the very best.

Your experiences and achievements will serve to inspire the imagination of others, making you inspiring role models for Ireland’s young women.

There is widespread agreement on the importance of sport in the overall development of the human person. It is vital that women participate in sport and are given every opportunity to do so, both from a lifestyle and enjoyment perspective. Irish women’s sport has never been stronger and in recent years the achievements of our female sports stars have contributed enormously to the overall success of Irish Sport. Cumann Camógaíochta na nGael are among those leading the way in providing sporting opportunities for young women throughout Ireland.

Throughout my Presidency I have sought to champion, advance and celebrate women’s achievements, highlighting the need for gender equality in every aspect of life, at home, abroad, and in sport.

It has been a pleasure for Sabina and I to celebrate International Women’s Day here at Áras an Uachtaráin every year and I am delighted to support the - 20x20 If You Can’t See It, You Can’t Be It – initiative; a movement which will shift cultural perception of women’s sport by committing to increase media coverage of women in sport by 20% - because if she can’t see it, she can’t be it.

We will all remember that wonderful day in late November last year, when UNESCO announced recognition of Ireland’s unique sports, Hurling and Camogie, on the Representative List of Intangible Cultural Heritage.

That global acknowledgement of the unique and cultural significance Camogie and Hurling, and of the important role Gaelic games play in Irish society is a tribute to the Gaelic sports associations whose work and volunteering ethos form the beating hearts of so many communities all over the island of Ireland and, indeed, all across the world, as Gaelic games are now played on every continent.

UNESCO’s recognition of the important role Gaelic games play in society, that they are an intrinsic part of Irish culture; they play a central role in promoting health, well-being and inclusiveness, highlights yet again that team spirit, respect for skill, excellence and creativity that are at the very heart of Irish society.

We can all be very proud of our native sports and of our international reputation for creativity, a reputation which is greatly enhanced by our sportswomen and men and by the countless volunteers who have passed on their love of the game to future generations.

You, our leading Irish sportswomen, will push open the gates to sport for more young women. You inspire future generations of girls to benefit from being more physically strong, mentally healthy, and, most important of all, equal.

You are the female role models that our young women of today and subsequent generations will want to emulate.

To the coaches, families, partners, administrators, officials and supporters, I thank you for everything you have worked to achieve, the long hours, the training sessions, the willing on, the guidance, the sacrifices you had to make to be there for the team, not to mention the heart-stopping moments, that your relatives and the wider public endured during the competitions themselves! 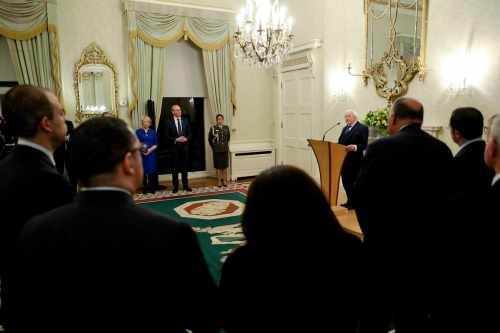