I am very pleased to welcome you all here today, members of the diplomatic corps and your families. You are most welcome to Áras an Uachtaráin, the home of all Irish Presidents since the Office of Uachtarán na hÉireann was created by our 1937 Constitution.

May I thank His Excellency, the Most Reverend Archbishop Okolo, Dean of the Diplomatic Corps, for his warm words and good wishes for the New Year. Last year I decided to break with tradition and to commence my speech with a toast, and I wish to continue with this break in tradition again. So, may I propose a toast to the Heads of State represented here.

Climate change and the biodiversity crisis together compose the largest threat to our shared future on Earth, an existential threat that is therefore the greatest of all the contemporary crises we face together. Climate change is now moving so much faster than the efforts we are expending or enlisting to address it. The cost of inaction is catastrophic, far greater than what it will cost us to set out on a truly meaningful, corrective path. With the Paris Agreement, we have both the framework and the foundations to move forward. Climate action is also essential if we are to achieve the Sustainable Development Goals.

While the UN is to be commended for bringing world leaders together every year for these important climate summits, they have often become enmeshed in incremental technicalities at these negotiations, resulting in a sense of public disappointment in the process because of the inability, or indeed unwillingness on the part of those defending interests, to recognise that there is an emergency, that addressing the true scale of the crisis requires more urgent, more comprehensive mitigation measures and more stringent emissions targets to be agreed and implemented by all nations.

Widening Inequality and the Democratic Crisis

If climate change and its consequences represents our greatest challenge given its existential nature, widening inequality, and the rise of extremist ideologies founded on fear and prejudice against the ‘Other’ – a democratic crisis – must also be identified as another great challenge that we face.

We are in the midst of an unavoidable global reality of deepening inequality between and internal to nations, and a loss of social cohesion that, in turn, has created a severe undermining of institutional credibility. All of these symptoms are sourced in a global failure in relation to addressing fundamental issues of human need over greed and giving them priority over accelerated dysfunctional versions of growth.

The manifestations of this weakness in our global approach are to be observed globally. Publics have grown tired and cynical about the inability of our institutions to meet their needs, systems they see increasingly as being stacked against them. Is it any surprise, then, that people succumb to the easy answers peddled by extremists who seek to scapegoat minorities, immigrants,  foreign or multi-lateral institutions, anyone or anything other than the inherent inequality and unsustainability of the policies that they themselves uphold?

May I suggest that it is by fostering deeper political economic literacy among our peoples that we may bring about the necessary ecological-social paradigm shift which I believe is urgently required, not just as a gesture towards inter-generational solidarity, but as a means of avoiding our legacy to the next generation being  a hostile, conflict-torn and volatile Planet Earth.

More and more I have become convinced that debt, at sovereign, institutional and household levels, has evolved into a form of unaccountable slavery, a circumstance that requires initiatives at UN level that will re-define the roles of such institutions as the World Bank and the International Monetary Organisation.

Our only hope to resolve the current impasse of curbing yawning inequality, restoring faith in democratic process and avoiding ecological catastrophe is to adopt a new form of heterodox economics, an eco-social paradigm shift based on a steady-state economics, eschewing the flawed concept of exponential growth. That is a model that places human need over greed, that values the sociality of humans and their wellbeing over narrow and misleading metrics such as GDP, that focuses on how we are to be in the world rather than how we are to consume the world.

If we are to achieve a paradigm shift, it will be necessary to combine the radicalism that is in the consciousness of climate activism, with the consciousness of egalitarianism and the programmes of inclusion activists and feminists that have been advanced with courage and good scholarship for years, but discounted by those ignorant or fearful of change or more often committed to defending privilege at whatever cost, including the exclusion of the needs of universalism from policy.

An issue that will test us in the coming year is migration. Migration is central to our Irish consciousness. We in Ireland are a migrant people, always have been from our origin, through our Famine in the 1840s, into the modern period. Our country, which historically has seen people leave in their millions, is now a country of net immigration. Today, one-in-six of our population was born outside Ireland. We have been transformed from a place where people were forced to leave, to a country that now has the opportunity to be a place of welcomes.

We are being told by some that migration at a global level is a threat. While it undoubtedly presents challenges and opportunities for both source and destination societies, are these not challenges that we can address together? Furthermore, is the challenge of migration not also linked to the crises facing us in relation to Climate Change, biodiversity loss, growing inequality, a delinquent global financial system and a loss of faith in our democratic institutions?

Is it not possible to address them in a concerted and coordinated manner? For example, when considering how to mobilise the funding required to address migration, or the measures needed to deliver on our commitments on the climate and sustainability agreements should we be looking to initiatives that can also address the capital that is seeking investment? So many funds – be it sovereign funds, pension funds or private funds –  are seeking a return that is not now available to them owing to the crisis of dead capital that is not being invested, and indeed that may be dangerously engaged in increasing speculatively the value of shares and that have no ultimate collateral.

A similar circumstance prevails in relation to credit. All of these sources of credit and capital, currently not being utilised should be available to create a Green Economy, a just transition, sustainable development, and solutions to migration issues in a way that is accountable, transparent, efficient and consistent with the UN Charter. Integrating a response to interacting crises makes sense. The UN realised a circumstance such as this when it responded in the 1940s.

Fragmented World, Multilateralism and the UN

I have just returned from the commemoration of the 75th anniversary of the liberation of Auschwitz. It was as a direct result of the aftermath of World War II that multilateralism gained credence as the best way forward for peaceful international relations.

Today, multilateralism remains the only option, despite the attempts of some powerful leaders to undermine it, and Ireland remains a strong advocate of the multilateral process. Ireland believes in the United Nations, supports its aims, and remains committed to continuous involvement in its work.  We must not be hesitant in speaking of how multilateralism has not only saved us from disastrous conflicts but has driven major advances for people across the world – from building programmes for poverty alleviation, better healthcare and education, and women’s empowerment.

Despite its many achievements, however, it would be naïve not to refer to the failures of the unrealised commitments of UN members. Gender violence continues to rise. Violence against women and girls is one of the most widespread, persistent and devastating human rights violations in our world today.  Kofi Annan, then Secretary-General of the United Nations, declared in a 2006 report published by the United Nations Development Fund for Women:

“Violence against women and girls is a problem of pandemic proportions. At least one out of every three women around the world has been beaten, coerced into sex, or otherwise abused in her lifetime with the abuser usually someone known to her.”

Such violence is, in many member states of the UN, allowed to prevail as a mechanism for the subjugation of women, whether in society in general or in an interpersonal relationship.  It is simply and always an abuse of rights, based on a sense of entitlement, superiority, misogyny or similar attitudes in the perpetrator, or because of a violent nature, especially against women. There can never be any cultural rationalisation for gender violence.

Then, too, the arms race continues to rage. Here we are in 2020 with the material capacity to abolish all forms of human poverty, to alleviate all unnecessary suffering, and yet we are still devoting so much of our creativity, not to the preservation or achievement of peace, but to the prosecution of, and preparation for, war. Amidst great human suffering, some nations now seek to embark upon a new arms race, increasing not only their own stockpiles, but exporting weapons of death and destruction to fuel the fires of war in other lands.

Ireland is clear on the need to reform the Security Council. For any entity to have legitimacy, it must reflect the make-up of the world in which it exists.

In particular, we continue to witness an historic unjust under-representation of Africa, which was still ruled by colonial powers when the UN came into existence and the Security Council established.  Africans must have a fair say in Council decisions affecting their own continent.

The key structural changes that are required in relation to Africa have been identified by the High Representative of the Commission of the African Union, Carlos Lopes and others. These include changing politics, respecting diversity, understanding policy space, sustainable industrialisation, increasing agricultural productivity, building a new social contract, adjusting to climate change, and inserting agency in the relationship with its key partners.

We also want to see consideration of a designated role for Small Island Developing States. The increasing effect of climate change on international peace and security gives this proposal even greater urgency.

If Ireland is successfully elected to the Security Council, we would address these issues meaningfully.

Looking Back to Learn Lessons for the Future

In Ireland, we continue to journey through a time of significant commemoration, marking and recalling our struggle for independence and some of the founding moments of our State. In 2020 we will remember important milestones on our long and difficult struggle towards independence, including the passing of the Government of Ireland Act 1920 which led to the establishment of a Home Rule parliament, and saw what was, for so long, a hopeful vision for many Irish citizens becoming a real and immediate prospect.

We will be challenged, as with all ethical remembrance, to avoid any simplistic idealising of our past struggles or the mistakes that were made. We have sought to do this in our celebratory events since 2016. With humility, may I suggest that it would clear so much ground for the future were colonising countries and collaborative ethics to embark on such an exercise in the European-African historical relationship. 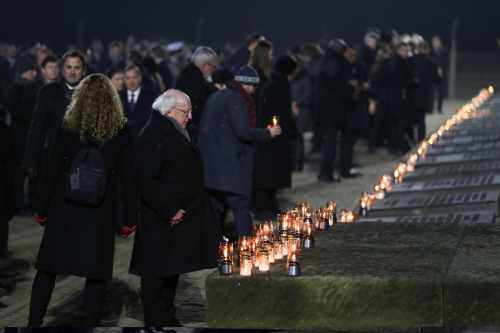