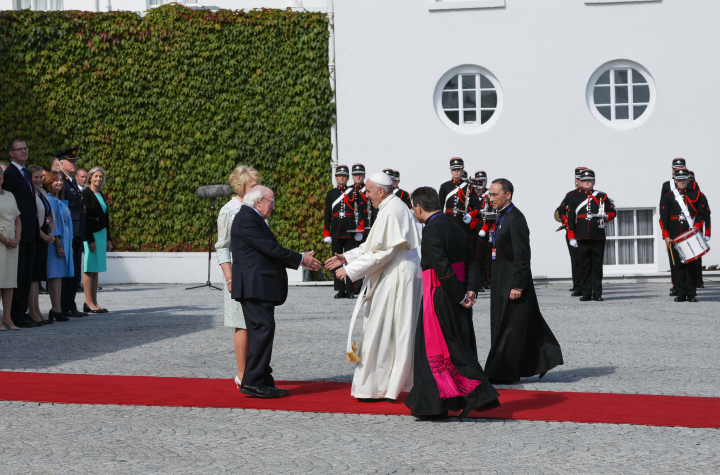 President Higgins welcomed His Holiness to Ireland on behalf of the Irish people. This was the third meeting between the two Heads of State.

During their meeting, President Higgins and His Holiness Pope Francis continued their previous discussions on a wide range of issues of mutual concern, emphasising the need for concerted international action to address the challenges of climate change, inequality, poverty, violent conflict and migration.
The President and His Holiness spoke of their shared conviction that social cohesion, solidarity and human rights must be at the heart of political and personal responses to the current challenges facing global communities. The present and future generations affected by such challenges deserve an engaged response to their needs and to be given a basis for their hopes for a sustainable planet with an interdependent people. The President said that he shared the concern of His Holiness at the lethargy of the global response which His Holiness Pope Francis has called ‘the globalisation of indifference’.

President Higgins referred to the important contribution made to the debate on the importance of connecting ecology, economics and ethics that was outlined by His Holiness in his ground-breaking encyclical, ‘Laudato Si’.
Both leaders agreed on the importance of protecting vulnerable communities and individuals, at home and abroad. President Higgins spoke to Pope Francis on the issues of homelessness, health, education and nutrition. They both emphasised the importance of measures to prevent and redress all forms of abuse of privilege or power.
President Higgins spoke to His Holiness of how the achievement of an equality of rights defined a Republic, and of how acts of exclusion, including those based on gender and sexual orientation, had caused, and were still causing, great suffering.

President Higgins raised with His Holiness the immense suffering and hurt caused by child sex abuse perpetrated by some within the Catholic Church. He spoke of the anger which had been conveyed to him at what was perceived to be the impunity enjoyed by those who had the responsibility of bringing such abuses for action by the appropriate authorities and have not done so.

The President welcomed the honest and forthright language that His Holiness used when addressing the issue in his recent Letter to the People of God. He conveyed to Pope Francis the widely held view that all would benefit from a set of actions that gave the necessary assurances to all citizens past, present and future, of all faiths and none.

Pope Francis is the 266th Pope and Bishop of Rome and Sovereign of the Vatican City State.

Pope Francis and President Higgins have met before, including at the Pope’s inauguration in March 2013, and more recently in May 2017.

President Michael D. Higgins has quoted Pope Francis on a number of occasions, including most recently on his Official Visit to Lithuania and his keynote address at the Galway International Arts Festival.

* ‘Solidarity in Europe - Achieving Authenticity in the European Street’ - May 2018

* Address to the Members of the Diplomatic Corps - January 2016

* Address to the United Nations Economic Commission for Africa - November 2014

* Address to the Members of the Diplomatic Corps - January 2014

When the President met Pope Francis in May 2017, he presented the pontiff with a Climate Bell.

The bell, made by the Irish artist Vivienne Roche, sounds a symbolic warning about the threats of climate change. Both the pope and Higgins have repeatedly expressed their urgent concern about this issue. 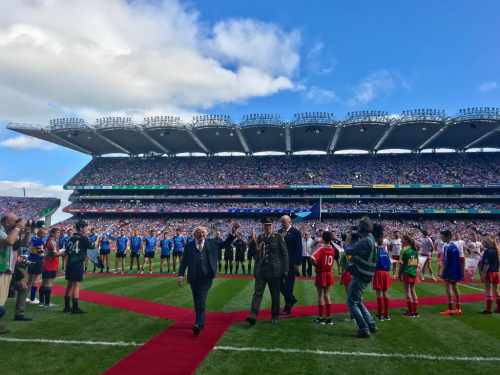 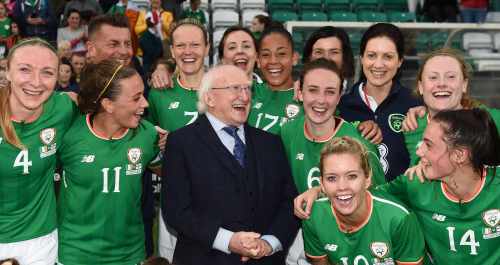