Speech at a Choral Evensong in Remembrance of Actors, Artists, Musicians and Entertainment Professionals

It is a great pleasure to join with you all in, celebrate with you, this beautiful Service of Remembrance of Actors, Artists, Musicians and Entertainment Professionals, here in this magnificent cathedral which has its foundations on one of the most ancient sites of Dublin city.

In this month of remembrance, we call to memory all of those who have gone before, those who have left their imprint in so many different ways on our own lives, on the lives of our families, and in some cases so profoundly on the society we inhabit today.

This afternoon we remember the Actors, Artists, Musicians and Entertainment Professionals no longer with us, whose legacy lives on in the creative work with which they gifted us during their lifetimes and which continues to enrich our lives today.

We, as a people, have, in many times and places, sought and found dreams of hope and possibility in the words, song, music and dance of our artists. In ancient Ireland, the filidh, the poets, enjoyed not only the love of his clan but the protection and patronage of the powerful.  It was the filí who carried and gave expression to the collective memory of the people, in all its triumph and its tragedy, and to their collective aspirations for the future.

With the coming of Christianity, and the new culture of the monastery, came a commitment to recording, in Irish and in Latin, our great mythological cycles: the Ulster Cycle, An Rúraíocht, with its tragic tale of Cú Chulainn, the Fenian cycle, An Fhiannaíocht, and its tales of the exploits of the Fianna, the Cycle of the Kings, with its wonderful account of the Buile Shuibhne, a story renewed by Seamus Heaney and Trevor Joyce, and the Mythological Cycle, which describes the origins of a people formed by successive waves of migration, with all the conflict but also with all that enrichment of mind, body and spirit that such migrations bring.

It is very important on a day such as today to recognise the importance of the performer and the performance in a myriad of styles and forms.  The performance preceded the record, made the archive of the future possible.

We are assembled in what was intended to be a monument to one such migration, who gave to this island a new syncretic culture, combining the native French language of the Normans with Irish, Latin – the language of the Church Fathers – and of course English, the language of our then recently conquered neighbour. The great Norman-French poem The Song of Dermot and the Earl, demonstrated that the role of the filí in extolling the virtue of his lord could reproduced in this new culture, one in which the Irish-speaking Diarmait Mac Murchada, long cast as the great villain of Irish history, could find a new and very different account of his actions than that imagined by his foes.

In the long years after the Battle of Kinsale, the filidh of Gaelic Ireland would become not only the repositories of a great and storied tradition, one which, now as outsiders and dissident intellectuals, they would breath a new life, that told of loss and subjugation of a culture and its people from the tragic lament penned by Eibhlín Dhubh Ní Chonaill to the biting satire of Brian Merriman, whose eighteenth-century comic poem which celebrated the body and desire for companionship Cúirt An Mheán Óiche was so subversive of a respectability in the translated form that is was banned by the Censorship Board when Frank O’Connor’s English translation was made available in 1946.

It is appropriate too in this great cathedral, to recall too the wonderful tradition of irony and righteous rage embodied in the works of Dean Swift, not only his allegories and popular political songs but his brilliant translations of Irish verse. Swift and his contemporaries, John Winstanley and Laurence Whyte, were formed by, and in turn formed, a distinctive Hibero-English culture, ironic, witty, and at times in necessary response to circumstance, rebellious.

All of those sometimes diverse legacies contributed to the two great artistic movements on our island at the turn of the last century, our Gaelic Revival and our Literary Revival, movements which encompassed artists as diverse as W.B Yeats, Douglas Hyde,
Lady Gregory, Daniel Corkery, Terence MacSwiney, and Patrick Pearse, and which would inspire the genius of Joyce, of O’Casey, and of Beckett, drawing as they did upon the great international cultural movements.

This is work that has continued, a legacy that renews itself with genius and generosity, on the part of performers to whom we as a public, and as a State, have a duty of care.

In the century since our independence our island has produced so many wonderful singers, musicians, craftspeople, artists, sculptors, and entertainers, performing and breathing life into the possibility of our achieving a real and beautiful republic. They are the inheritors of a great and diverse tradition, one which they, our artists and cultural workers, have given a new voice, brought new influences from across the world, giving new forms to contemporary dreams and ideas.

As President, I celebrate them all, and today, as President, I am honoured to join you all in reflecting, not only on the great bodies of work left behind by so many of our friends and loved ones, but on the manner in which that work provided such an important portal to our past, capturing its singular moments and events, navigating through time and place, bringing us so deeply into the lives and thoughts of those who have gone before, and mapping a changing world measured through the music, art, drama and performance that emerges as societies grow and develop and change.

Great artistic work is not only beautiful, inspiring, tragic, uplifting, or thought provoking. It is provocative, necessarily intellectually subversive in reminding us of possibilities not yet realised, worlds waiting to be born, depths of humanity yet to be experienced. It is also work that creates enduring bonds between the world we inhabit today, and the past which fashioned, sculpted and formed that world, but, and even more importantly, that work is how imagination is made possible in its different ways.

By encapsulating, through a piece of music, a painting or a dramatic work, the preoccupations, the myriad complex thoughts and emotions of a different moment in time artists gift future generations with  doorways not only to the past but to the present and future in their offering of the opportunities to weave a journey back to the present moment, or away from it, armed with new truths and insights, facilitating the fletching of new arrows for flight to the future.

For it is, after all, through the generous hearing of other narratives, the respecting of the intricacy and the multifarious perspectives of the past, an openness to an imaginative ethic of memory, that we will be enabled to travel together towards a better future.

Great artists have so often been those brave pioneers who constantly challenge, contest and critique the norms of the societies and ages into which they were born. In encountering that pioneering work, we discover the visions and fantasies of, and aspirations for, a better world that so often drives the work of our great artists.  We at times fail to give sufficient attention to the agony that is involved, in the preparation for, delivery and exhausted pursuit of an aesthetic projection.

It is creativity that inspires innovation, and it is those artists who so often engage in ongoing journeys towards the finding of solutions to open ended questions and more just and equal societies.

We owe a great debt of gratitude therefore to those gifted and creative people who went before, just as we owe to future generations a duty to also be those brave pioneers unafraid to engage in new tasks of imagination. We also as a society have the responsibility of nurturing that the lives and livelihoods of our contemporary artists possible.

In this Office of Evensong, a form created by Archbishop Thomas Cranmer, we recall through our readings and prayers, and through the singing of the Choir in the versicles and responses, psalm, Canticles, and Anthem the lasting contributions of all our artists who have died, and this year so many have passed from us, leaving behind their enduring legacy, a legacy that joins the tapestry first woven by earliest filidh on this island, and formed through the many centuries since.

They have so greatly enriched our world and inspired the work of future generations of created and gifted citizens those whose work will also offer innovation in our capacity to live good lives together.

It is an honour for me to attend this Evensong and to remember, through such a poignant and beautiful service, the many lives dedicated to fashioning the art and culture of our republic. 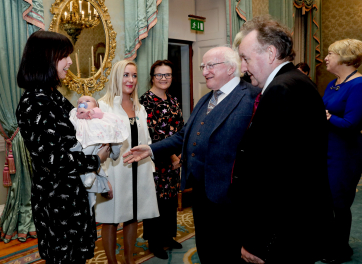 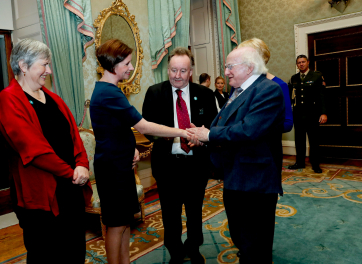 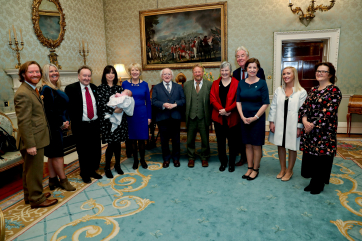 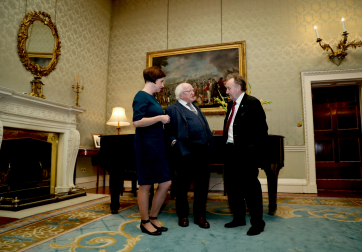 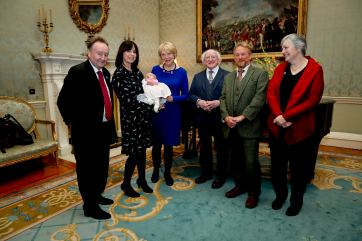