Distinguished heads of state and governments,

I would like to thank the President of the General Assembly for convening this meeting, provoking,  as it does, some fundamental questions as to our very being as a United Nations.

Is it not a profound condemnation of what we have made of the legacies of our cultures, reason, ethics and belief systems, that we, in these first decades of the twenty-first century, live in a world that is home to so much war: wars the preparations for which absorb the finest minds in science and technology; wars in which civilians are more at risk than ever before, subject to atrocities, famine and starvation and, to an unprecedented degree, displacement.

It is an affront to humanity that, in these first decades of the twenty-first century, at a time when we have the capacity to abolish all forms of human poverty, we share a planet with hundreds of millions who are, even as we speak here today, deprived of their most fundamental rights, deprived of a dignified existence.

Why have we resiled, I ask, to a politics of fear, rather than to the promise of the politics of possibilities?

Is it not nothing less than a moral outrage that our boundless capacity for creativity and innovation, and the fruits of new science and technology, are turned, not to the promotion and preservation of peace, but to the pursuit and prosecution of war?

The President of the General Assembly and the Secretary-General have invited all of us gathered here over these two days to reflect upon the achievement of five specific objectives, each of which have been the subject of many debates, not only within this Assembly and within the Security Council, but also in civic forums throughout the world.

These objectives, in their scale and their ambition, are a confirmation that building and sustaining peace is an enormous task, yet one that we must achieve together as a community of nations if we are to live up to the ideals of the United Nations and to give the ring of authenticity to our words as public figures again.

Ireland, the country I represent, knows from our own Peace Process which continues to this day that peace does not come without engaging with the experience of the Other, that it remains a process to be nurtured.

The Northern Ireland Peace Agreement, signed on Good Friday twenty years ago, demonstrates some of those conditions which you, Mr President, have identified as essential for successful peacebuilding: direct engagement by the two governments involved in the negotiations; sustained financing for peacebuilding activities; strong support from the European Union; and generous and patient backing from other Members of the United Nations, most particularly from those with a connection to Ireland such as the United States.

Neither could our peace have been achieved without the steady and courageous activism of civic organisations campaigning for a more just and peaceful society, many of which were led by the women of Ireland, North and South.

Yet while we celebrate the end of violence, the lives saved and the futures transformed, we are reminded daily of the challenges of sustaining peace.

So, Mr President, I do not look in the abstract at the objectives you have set for our Meeting over these two days.

The Secretary General’s report outlines an ambitious plan of action for the agencies of the United Nations, but, make no mistake, the Secretary-General is very clear that sustaining peace is the responsibility of us all, the Member States.

Let us again recall the words of the founding Charter of this organisation, ‘we, the peoples of the United Nations, determined to save succeeding generations from the scourge of war, which twice in our lifetime has brought untold sorrow to mankind’. Through these words we assumed, all of us members, a most profound political and moral responsibility, not only to the citizens of our own nations, but to the peoples of other nations. We must have the courage now to ask how we have come to lose this discourse of peace, and what are the inevitabilities of connection between ecology, economy and society that serve as obstacles to our bringing a new paradigm of sustained peace and development into being.

The Secretary-General and the agencies of the United Nations will only be successful in pursuing our common objective of sustaining peace, if we, the Member States, re-commit ourselves to those founding principles, to which we dedicated ourselves so many years ago, and we must allow the new thinking and the new paradigms of critical thought we need, to emerge.

As this Assembly recognised two years ago, the outbreak and recurrence of conflict can only be prevented by addressing its root causes. This demands political imagination and financial commitment, which must be met with answerable determination on the part of Member States.

Yet, as the Secretary-General has so often reminded us since he assumed office, sufficient and effective investment in building peace will not only save lives, but will open all of the possibilities and opportunities for development and human flourishing that peace brings, which are so necessary if we are accomplish the goals of that most remarkable representation of our shared global solidarity, the 2030 Agenda for Sustainable Development.

Ireland is pleased that the Secretary-General has laid down this challenge. We know that when the United Nations and the Member States work coherently across the pillars of peace and security, human rights, and development, real, sustained and measurable progress is possible.

Humanitarian actions must not any longer be allowed to serve as sufficient responses to crises that are political in their origins. Humanitarian action is not a substitute for political dialogue and mediation. Nor is the remarkable work of UN peacekeepers, whose service, including that of many Irish men and women over the past 60 years, whom I salute here today. UN peace support operations save countless lives, but they can only ever be but one element of a comprehensive response.

If we are to truly commit ourselves to the objective of sustaining peace we must discard any narrow and cynical realism. The young of the world are appalled by any suggestion that what is normative is for the General Assembly and that the strut of the powerful and the wielders of power can prevail in the Security Council. That is what is losing the young.

Let us instead heed the lost hopes of all of our collective pasts, the pleas for wisdom that were the whispers from the gallery, when so many of the newly free states brought the hopes of their people and the wisdom of their people, to the United Nations.

Let us once again, in this Hall, recall the energy of that moral moment, the bravery, the critical scholarship, the hope which animated our forebears in their best moments and devote ourselves to the cause of a universal peace, one that encompasses all of the people of our shared and vulnerable planet. 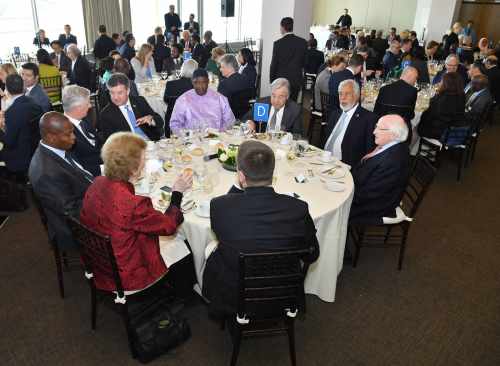