Speech at the 50th Anniversary of Open University

It is such a pleasure for me, as President of Ireland, and for my wife Sabina to join you here today as together we celebrate your significant achievement with the Open University. I would like to thank John d’Arcy, Director of the Open University in Ireland for his kind words and indeed for his kind invitation for me to join you today for this public ceremony which acknowledges that after years of study you have met the required standards to be awarded the degree or diploma that you set out to achieve.

When I congratulate this gathering today, I am not confining my praise to those of you in gowns. I am also congratulating those family members, partners, husbands and wives, children, friends and work colleagues whose encouragement, support and, at times, patience and forbearance, helped you all to get over the line. Tréaslaím libh uilig!

As you may know, in a previous incarnation, I spent many years as a lecturer in NUIG, or UCG as it was known, when I started there. My own path to that position, and indeed to my current position, was not a foregone conclusion. I was the first member of my family to have the privilege of progressing to third level education.

At the time and in the place I grew up in the 50’s and early 60’s it was not the norm for people to do the leaving certificate, let alone progress to third level. We should remember that it was not until 1947 in Northern Ireland and 1966 in the south that free secondary education was introduced, an emancipatory move that provided a pathway for so many more people to finish secondary school and allow them a platform from which to progress to third level.

Prior to that, free secondary education, for those who did get to do the Leaving, only a few could aspire to third level.  There were costs associated, even with being called to the Training College for national teaching.   The Care Service, the Semi-State Companies or the new jobs in the industrial estates in factories was what was available.  Between 1955 and 1960 after all 250,000 people left Ireland, mostly for England.

I remember at that time becoming acutely conscious of the unfairness of it that despite having a good leaving certificate, our poverty would act as an impediment to my desire to teach.

After a period as a clerk in a factory in Shannon, I started work with the ESB as a Grade 8 Clerk.  There was a demand by many of those in my position in Galway at the time for night classes – they were available in Dublin but not available in Galway.  But, due to an act of generosity, within a few years an opportunity arose for me to attend UCG as a “mature” student, though not as mature as some of you I would venture! I was 21.  This was a defining point for me. In some ways a chance-opportunity but one which exposed me to a world of learning that was simply not available for so many others of my age and background.

My studies in those early years encouraged within me a curiosity and hunger to understand how the world worked and it equipped me with the language and the intellectual tools to interrogate it and to imagine how it might work better, achieve equality of educational opportunity. The intellectual exercise and mind work involved in studying, discussing and debating fed my interest in the world around me, in all the possibilities that I saw for how we could create a better, more inclusive, fairer society for each other and it set me on the sometimes-meandering path that I have followed since then.

For me, it was the time spent in conversation and debate with fellow students, tutors and lecturers that helped me to form my thoughts and views.  I am so glad to see that the Open University encourages students to work together and to come together for tutorials and group sessions where those valuable discussions can take place and where you can help each other to shape your understanding and test your assumptions.

Education in Ireland or anywhere else can only be understood in its societal context. Undoubtedly the Irish experience at primary and secondary levels is admirable and praiseworthy in so many ways. However, like the broader society in which it resides, it contains inherent biases and tendencies that can serve to pre-determine educational outcomes, depending on where and how the child enters the formal system.  It would be a wonderful achievement of any Republic surely, that all children started with an equality of resources and opportunities in education.

When it comes to progression from second level to higher education there are so many factors that can help to determine if and when any woman or man will pursue further education. Finances, social expectations and family circumstances are obvious influences and so too is the individual’s disposition, readiness or self-confidence to start an academic course.

Most of you have come to further education later in life. At the risk of transgressing GDPR rules, I understand that the biggest cohort of today’s graduates are in your forties, followed by the youngsters in their thirties and a few child prodigies still in your twenties. What you all have in common is that each of you accepted the personal challenge of pursuing a third level course when the time was right for you.

Some of you, the old hands, are receiving postgraduate qualifications. For others today is the culmination of your first third level educational adventure. Many of you had not studied since leaving school and may have harboured doubts in your own abilities to succeed or to see it through. Today is a vindication of your belief in yourselves and of the faith kept by those closest to you. I congratulate you all on having the courage to commence your studies and the discipline to carry them through to completion.

The structures and support of the Open University have also been a wonderful fit for your circumstances, allowing you to shape your studies around the other demands on your time.

Fifty years ago, the British Labour Prime Minister Harold Wilson had a vision of inclusive education that would radically transform the third level sector. The proposal that working people and those without paid employment, no matter where they lived and no matter what their family or financial situations were, would be given access to the highest standard of academic scholarship through participation in higher education was nothing short of revolutionary.

Flexibility and well-designed student support coupled with innovative methods of teaching and course delivery have seen over two million graduations in the past half century. With current enrolment at almost 175,000 individuals, the Open University is now one of the world’s largest Universities. Its open admissions policy has removed a very real impediment to so many who would otherwise find it difficult to meet the entry criteria for university courses.

Over the past half-century, the Open University has become more and more engaged across Ireland with over 40,000 qualifications having been achieved in that time.

The opening of its Advice and Enquiry Centre in Dublin in the mid-nineties has been followed by very fruitful collaboration with the Higher Education Authority, the Psychological Society of Ireland and RTÉ.

Open University’s provision of Irish-focussed modules is also to be applauded including its module launched last year on the Good Friday Agreement, and “Irish 101 – An introduction to Irish Language and Culture” which was a joint collaboration with Dublin City University and the Irish Government; Another module “Languages of Ulster” which was co-produced with BBC Northern Ireland explores our linguistic heritage covering Irish, Ulster Scots and the distinctive strand of Ulster Hiberno-English.

An all-island collaboration between the Open University, Enterprise Ireland and invest Northern Ireland “Open for Growth” has developed distant learning resources for growing companies across the island. These initiatives are so vital in encouraging North-South and East-West cooperation and mutual support and will be of even more value as we move forward.

For today’s graduates, the range of subjects that you have studied is impressive in its breadth and depth. From Philosophy to Engineering, Social Work to Medicinal Chemistry the Open University has enabled you to pursue those fields that are of most interest to you and of most relevance to your lives.

The benefits of tutor support, distance learning, and Open Learn, a free educational resource provides a very democratic approach to third level studies - one that has allowed over 80% of Irish Open University Students to undertake their studies while working.

Universal access to courses is also enabled by the Open University’s emphasis on accessibility and its focus on helping to meet the needs of students with the additional challenges of having a disability. It is not surprising that the Open University would be so progressive in this regard, as it is consistent with its philosophy to systematically remove the barriers that have prevented so many people from fulfilling their academic potential.

The influence of the Open University ethos on the broader third level sector has also been remarkable. Universities now routinely offer distance learning and provide alternative routes to enrolment in their courses, opening them up to students from backgrounds not traditionally represented among their student populations. Over 800 universities around the world now offer open online courses. Much of this is a direct result of the public service ethos of the Open University and its genesis within a positive State intervention in the Education sector for the public good.

Notwithstanding the challenges that it faces, which are common to so many of our universities and third level institutions, the Open University can look back with justifiable pride in its achievements over the past five decades. You who are graduating today are the latest manifestation of that success.  I am confident that the Open University has a bright future and will continue to innovate and find ways to attract and support students like you, who are searching for academic excellence.

I would also like to commend the Open University for its inspired decision to honour Stephen Rea with an honorary degree. Stephen has made such a vital contribution to arts and culture across these islands. Molaim é agus deanaim comhghairdeas leis.  He has my heartfelt congratulations.

This is not the end for you as students but rather a staging post in your lives of ongoing learning. My hope is that the knowledge and skills you have acquired will help you to achieve your goals and will better equip you to be constructive, active citizens. Engaged in your communities and in the challenges we face together, and aware of the contribution that each of you can make to forging a better, shared future for us all.

Mar Uachtarán na hÉireann, as President of Ireland, I wish you well in all that you do. I thank the Open University for its contribution to Education and for its remarkable achievements since 1969. 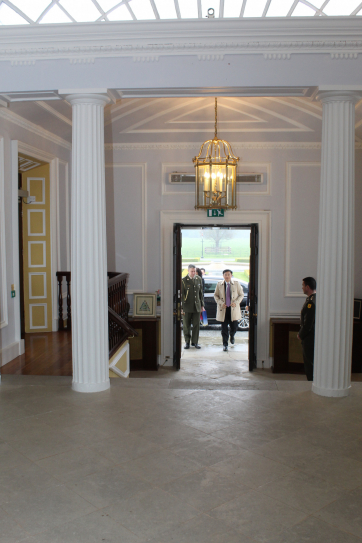 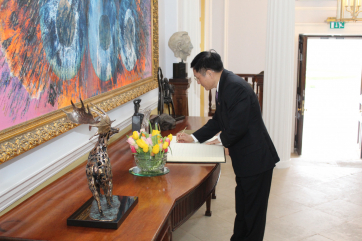 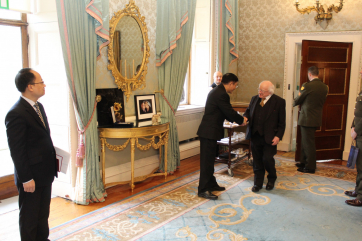 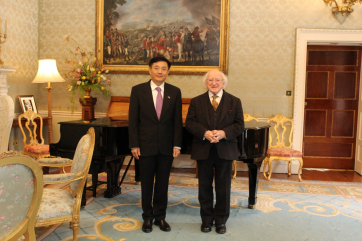 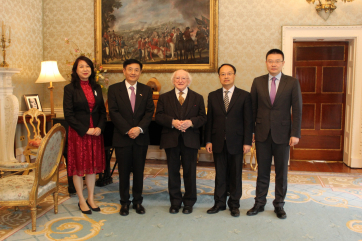 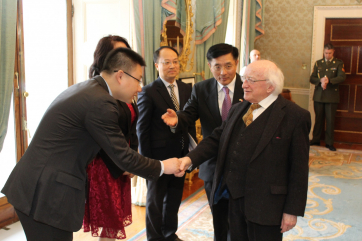 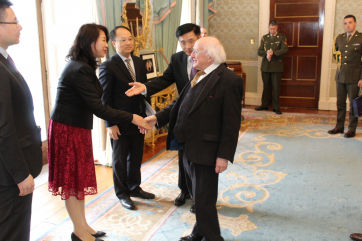 President receives the Ambassador of China on a Farewell Courtesy Call