Speech at the 40th anniversary of the Archives and Records Association

We are all protectors and curators of the history that will be handed on to future generations, possessors of stories that may be an integral part of our own and our family’s life story, but are also a critical part of Ireland’s shared social history.

I am delighted to be here this evening to celebrate the 40th anniversary of the Archives and Records Association.  May I thank Gerard Byrne for his kind invitation to join you all for what is a landmark event.

The stated vision of the Archives and Records Association is to treasure and safeguard archives and records and value the role of specialist record keepers. That objective which I wholeheartedly endorse is one of ensuring that the story of our nation will be preserved and that all our citizens will be enabled to engage, in personal and enriching ways, not only with critical moments in our national history but to engage with curiosity with all aspects of the narrative of that shared history.

We are, of course, currently journeying through what has been called a decade of commemoration, as we mark and recall some of the founding moments of our State.

This is an exercise which rightly reminds us of the great importance of enabling scholars and our citizens in engaging with what is on record, and has been collected of our shared past, the challenge too, of recalling it in ways that are ethically and increasingly honest, to have access to as many versions of our history as possible and the many individual stories that comprise that history.

I think, for instance, of the 1916 Rising Oral History Collection, housed in the National Library, and of how it provides us with a more personalised and  inclusive understanding of the stories of all of the citizens who became involved, in their different ways, in those profound moments of our history.

In this regard, I was delighted to hear earlier today that the Government has announced funding to continue and expand the excellent work undertaken by the Irish Research Council of recreating, through the digitisation of archives located within Ireland, Britain and further afield, the Public Records Office of Ireland that was lost when the Four Courts was destroyed during the civil war. This is an exciting and worthy project that will help us to interrogate further our history and rediscover what has been lost to us for almost a century.

In encountering such sources as the 1916 Rising Oral History collection, one comes face-to-face with the day-to-day cycles of the many ordinary lives that influenced, and were affected by, that extraordinary period, of how the significance of the events was interpreted and the responses, resonated through the lived experience of citizens.

While the stories contained in that collection can help bring us deeply into the reality of 1916 in all its complexity, they also, of course, remind us, and challenge us, that we are all protectors and curators of the history that will be handed on to future generations, possessors of stories that may be an integral part of our own and our family’s life story, but are also a critical part of Ireland’s shared social history.

The critical relationship between past, present and future should be one that is never delegated solely, or crafted by politicians, organisations or even historians.  The responsibility is a general one that falls on all the citizens who live through the moods and concerns of their own eras and generational experiences.

There are revisions of our assumptions and the historiography that came from new sources, think of the Irish Military Pension Archive which was made public in 2017. Described by Diarmaid Ferriter as the ‘biggest piece of the jigsaw relating to that period in terms of archives’ the stories contained within it allow us insight into the varied experiences of the 85,000 ordinary citizens who claimed pension or dependents’ allowance for active service during the seismic period of Irish history between 1916 and 1921. Again, we are brought into the reality of the lives of so many whose names do not appear in our history books but who were critical to the shaping of the Republic we inhabit today.  We are also left with insights into how an alliance of political favouritism and institutional coldness, and insensitivity brought rejection, hurt and bitterness to the heart of so many families.

The tough and challenging circumstances that so many of those who fought and made personal sacrifices for a more just and democratic Ireland faced, and the often unequal and sometimes cruel treatment they received from a new state to which they had helped give birth, forces us to ask the difficult questions not always prompted by official versions of our shared history.

Archival collections play a critical role in the development of an honest interrogation of a nation – one which allows us to view our past in a way that can be, of course, at times appropriately celebratory but which prevents us from idealising that past or from ignoring its flaws or evading the mistakes that were made.

We have made a good beginning, one that contrasts, for example, with the neglected critique of empire by those of our fellow Europeans; Be it in relation to Africa, for example; a neglect which impairs current and future policy.,

Freedom of access to archives is a vital element, indeed a fundamental value, of a properly functioning democracy. Such access allows us to investigate and interrogate the actions and decisions of those who went before, to explore our individual and collective identities, and to understand our role and our responsibilities as citizens.

An understanding of the complexity from where we have come, or how we have arrived at where we are, we are empowered as citizens to shape and negotiate the relationship between our collective past, the contemporary moment, and that which is yet to come.

Such access can only be possible if it is supported by the necessary infrastructure and processes that are fundamental to archival science, and as a society we can be very grateful to the Archives and Records Association for its very important work in this regard. By ensuring the provision of such a vital resource for democracy, a public service and a rich reserve of knowledge for future generations you enable a profound understanding of the rich social, economic and political history from which modern day Ireland has grown and evolved.

By allowing us the opportunity to engage with the past and to reclaim some of the most important moments in our national history, including our difficult struggle for independence, you enable us to engage, in a personal, enriching and immediate way, with that past, bringing us deep into the narrative of our shared history.

The Archives and Records Association has, of course, its own rich narrative and as you look back across the last four decades you have much to remember with pride.

Forty years ago you had just thirty three members, this number has now grown to three hundred, comprising professional archivists, records managers and archive conservators from all the different types of organisations that employ such professionals.

Today, the breadth of your membership includes the National Archives, the Public Records Office of Northern Ireland, Government Departments, State Bodies, Local Authorities, Universities, Private archives, the legal sector and the financial sector who all benefit from your mission to foster, promote and seek to broaden the care, management, access to and use of records and archives by everyone. This includes, of course, the greatly improved legal protection of archives created by central and local government due to legislation enacted since your formation - such as the National Archives (Amendment) Act, 2018 as well as section 65 of the Local Government Act, 1994.

Across the forty years of your existence, our means of accessing information has, of course, evolved, presenting new and interesting challenges for all those who work in the field of archival science. When I was Minister with responsibility for the National Archives, over 20 years ago, the means of facilitating the public to access archives were considerably different from what pertains today.

It is this I may tell you that is of particular concern to me to learn that staffing and skills shortages, along with a lack of storage space is hindering the ability of our national archives system, not only to process records and make them available to the public but also to carefully digitise records and develop online access to them.

As with all repositories of important public information it is important that our Archives are resourced in a way that will enable them to avail of technological advances and that will allow critical material to be accessed online. This is an area in which I know you are actively involved, facilitating discussion and support for practitioners who wish to remain informed and up to date on developments relating to the curation of digitised material.

There can be no doubt that you have travelled a considerable journey since your establishment in Buswells Hotel in May 1979. There can be equally no doubt of your continued commitment to the democratisation of the study of history, and the bringing of new perceptions and viewpoints to events of the past.

May I, at this point, congratulate Aideen Ireland on her appointment as President of the Archives and Records Association, UK and Ireland.   This is a significant and deserved recognition.  Throughout a distinguished career Aideen has not only undertaken extensive work at the National Archives and across the sector but has  also served as a member of the council, as president and as fellow of the Royal Society of Antiquaries of Ireland and as council member and fellow of the Royal Society of Antiquaries, London. We have also benefitted greatly from Aideen’s tenure as Chair of the Society of Archivists, Ireland and Chair of the Society of Archivists, UK and Ireland.  I wish her very success in her new role.

Finally, may I thank you all once again for welcoming me so generously here today. I wish you every success as you continue to enable all our citizens to engage with our story, in all its complexities and diversities, enriching it with new perspectives and better informed assessment and evaluation. 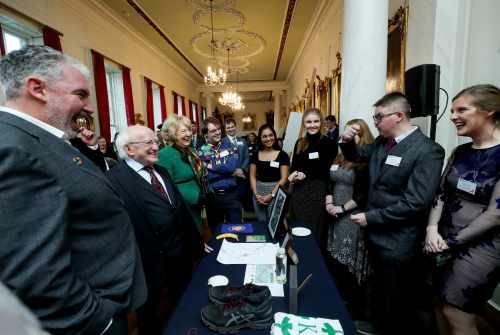