I am delighted to take part in today’s launch of the National Park City for Galway initiative, having accepted recently the kind invitation, as President of Ireland, to become the sole Patron of the initiative. May I thank Brendan Smith, the Convenor of the National Park City for Galway, for the invitation to officially launch this wonderful scheme which will be so enriching to the people of Galway and beyond.

As someone to whom Galway is home, and as a former Mayor of Galway and member of its City Council and County Council for so many years, it gives me the greatest satisfaction that Galway is leading the way with this project for a vital piece of green infrastructure, that will protect and enhance the natural world in an urban environment and thus providing a template for other Irish cities to emulate.

This initiative has an extra dimension for it is a wonderful example of inclusion, based as it is around ensuring representation from a cross-section of all of Galway society, including young people, those in direct provision, small business, corporate, retail, medical, teaching, science, engineering, architecture, local communities, arts, crafts, environmental, media, cycling and walking advocacy, to name but a few.

What you are doing here – planting trees and wildflowers, creating a series of linked woodlands, meadows, wetlands, parks, waterways and green spaces, providing ‘ecological corridors’ for wildlife to move into and out of the city – is such a magnificent example of active citizenship at its very best. I applaud your efforts.

By enabling all of Galway’s residents to connect with nature, you are expanding horizons by enabling all citizens to have an opportunity of appreciating the wonders of nature, thus ensuring that all those who call Galway their home, or who visit us, have free and easy access to high-quality green and blue space.

This initiative will play a critical role in improving the biodiversity, air quality and ecological balance of the Galway metropolitan area, increasing awareness and education of the issues of climate change, biodiversity and ecology, while improving human health and wellbeing.

Like many cities around Ireland, Galway would benefit from an improved city-wide pedestrian and cycle network where people can walk or cycle in a safe, clean, green landscape. This initiative can significantly contribute to that objective, raising awareness and appreciation of Galway City’s extensive network of natural and man-made waterways, ensuring their better management, as well as promoting more sensitive urban development and spatial planning for Galway’s residents, visitors, and wildlife.

There is a further great dimension to this project - The initiative plans to promote nature through the medium of art, for Galway is well-known as a city where artists and cultural practitioners have flocked to over the decades, indeed centuries. To have Galway in recent times voted Friendliest European City is a great tribute to all those who live in a city that has a good heart. It is also so heartening to see an emphasis on the promotion of locally grown food and responsible consumption, including the achievement of zero waste.

The National Park for Galway City is of course part of a bigger international picture, that will contribute to the United Nations’ 2030 Agenda about which Sabina and I feel so passionately, and the 17 Sustainable Development Goals that emanate from this milestone international agreement that endeavours to create a more just, inclusive and sustainable world.

Initiatives such as this could not happen without inspiration which in matters ecological has come from literally decades from Brendan Smith and of course volunteers – those active citizens playing their part in the betterment of wider society. Such volunteerism and leadership must come from all sections of society in order to be a truly inclusive initiative, including from schools, third-level institutions, residential areas and places of employment, so that local green initiatives, such as the National Park for Galway City, become mainstreamed, a norm in our communities, towns, cities, as well as in Government plans, policies and measures.

While most agree that the planet is in peril, that we stand on an ecological precipice, the existential crisis we face, that of climate change and biodiversity loss, is such a momentous challenge of enormous scale that it can sometimes feel overwhelming, rendering us powerless, hopeless and even apathetic to the challenges it presents. However, projects such as this are a powerful and tangible exemplar of what can be done from the ‘bottom-up’, tackling the issue at grassroots level and fostering widespread awareness and buy-in, creating an environmental consciousness that can deliver powerful, far-reaching and lasting results.

Mar focal scoir, may I conclude by wishing Brendan Smith and all those involved in the National Park for Galway City initiative, which we launch today, my very best. I have no doubt that this initiative you are spearheading will be repeated in other cities around the country, such is its potential for good, for personal fulfilment, societal betterment and ecological sustainability. 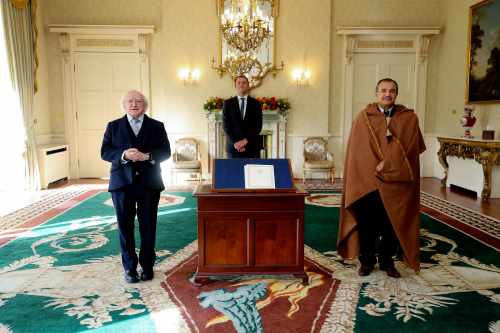 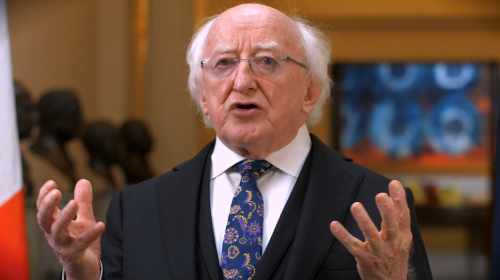