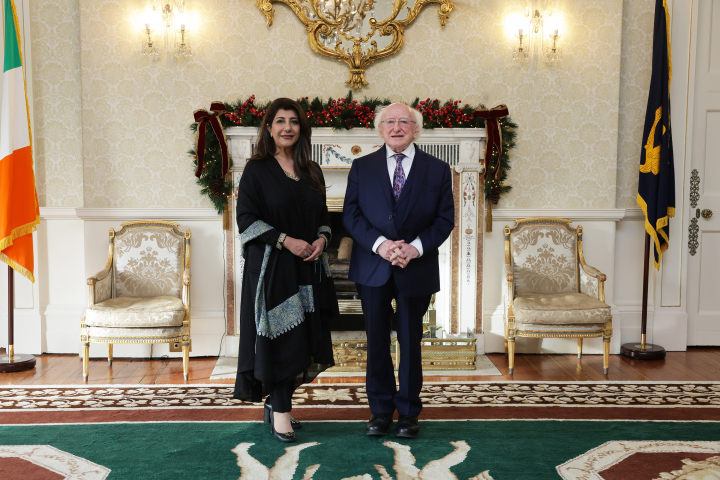 Her Excellency, Ms. Aisha Farooqui, Ambassador of the Islamic Republic of Pakistan was accompanied by her daughter, Ms. Azmae Shahzad, and Mr. Shahid Iqbal, First Secretary.

Mr. Niall Collins TD, Minister of State for the Department of Further and Higher Education, Research, Innovation and Science with responsibility for Skills and Further Education, represented the Government at the ceremony.

The Ambassadors were accompanied to and from Áras an Uachtaráin by an Escort of Honour consisting of a motorcycle detachment drawn from the 2 Brigade Cavalry Squadron, Cathal Brugha Barracks, Dublin, under the command of Second Lieutenant Oisin O’Rourke.

A Guard of Honour was provided at Áras an Uachtaráin by the Air Corps, Baldonnel, Co Dublin under the command of Lieutenant Ronan O’Leary.

Lieutenant Kevin Redmond from the Air Corps was the flag officer.

Captain John Carpenter conducted the Number 1 Band which is based in Cathal Brugha Barracks, Dublin.

President attends Mission “Restore our Ocean and Waters by 2030”: an Atlantic-Arctic Lighthouse event 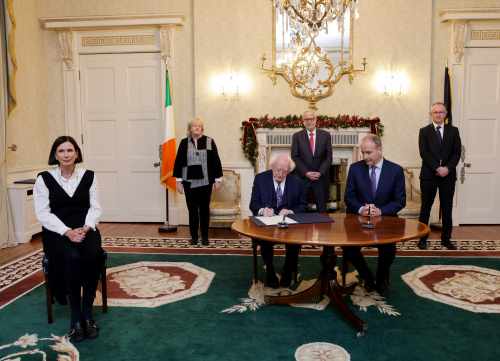 President appoints Judges to the Supreme Court and the High Court