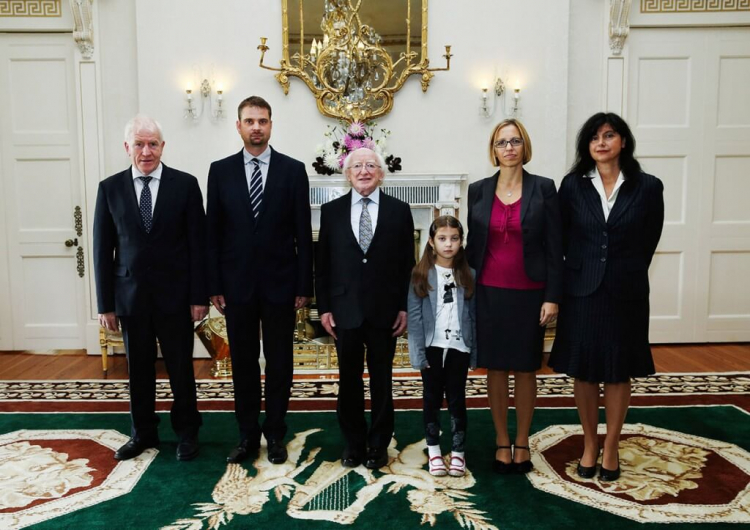 Their Excellencies, the Ambassadors of the Kingdom of Denmark, the Republic of Serbia and the Republic of Slovenia presented their Letters of Credence to the President at Áras an Uachtaráin today, 30th September 2014.

H.E. Mr. Carsten Søndergaard, Ambassador of the Kingdom of Denmark, was accompanied by his wife, Mrs. Lone Søndergaard, and by Mrs. Seemab Sheikh, Counsellor and Deputy Head of Mission.

H.E. Mr. Ognjen Pribićević, Ambassador of the Republic of Serbia, was accompanied by Ms. Neda Mijajlović, Second Secretary at the Embassy.

H.E. Mr. Tadej Rupel, Ambassador of the Republic of Slovenia, was accompanied by his wife, Mrs. Valentina Prevolnik Rupel, their daughter Klara, and by Ms. Renata Cvelbar-Bek, Minister Plenipotentiary at the Embassy.

Mr. Jimmy Deenihan, T.D., Minister of State at the Departments of the Taoiseach and Foreign Affairs and Trade, represented the Government at the ceremony.

The Ambassadors were escorted to and from Áras an Uachtaráin by an Escort of Honour consisting of a motorcycle detachment drawn from the 2nd Cavalry Squadron, Cathal Brugha Barracks, Dublin, under the command of Lieutenant Cathal Daly.

A Guard of Honour was provided at Áras an Uachtaráin by the 2nd Artillery Regiment, 2nd Brigade, Custume Barracks, Athlone, Co. Westmeath, under the command of Lieutenant Mark Sheridan.