I hope you find today’s seminar interesting, thought-provoking, perhaps even a further reminder of the value of transacting history.

In choosing themes for today’s Machnamh seminar, I was conscious that in the historiography of the 19th century, dominated as it was by the campaigns for Emancipation, Repeal, Home Rule, the anti-tithe movement, the underlying theme for all such campaigns carried the resonance of land; be it access to land, to security of tenure, response to changes in production, population pressure – it is always there.

The vocabulary of Irish history in relation to land contains some of the most emotive terms in Irish memory, terms such as ‘enclosure’, ‘occupation’, ‘settlement’ ‘plantation’ ’eviction’, ‘improvements’.  Such resonating cries were all present in the discourse of the 19th century.

It is in relation to land that the most harrowing of confrontations in rural Ireland occurred. They would include evictions and the response to them, rallies and actions of the land war, confrontations, boycotts, divisions, and attempts at an eventual alliance between agrarian agitation and parliamentary action which would result in Land Acts that would utterly change Irish society.

That change in status from insecure tenancy to proprietorship that the Land Acts facilitated had huge implications for those who worked on the land, be it in relation to the inheritance pattern of Post-Famine Ireland, or the agricultural labourers.  The position of rural women in Ireland would be changed, especially by the particular form of post-Famine stem family inheritance arrangements that would emerge, as would women’s participation in new patterns of emigration.

Beyond particular incidents that were violent, I see in these adjustments, far from harmonious, an institutional source of violence, which an orientation in the historiography has led to its being not given significant account. While this gloss on events is mitigated to some extent by the fulsome accounts of the fusion, late in the century, of agrarian revolt, with the parliamentary activity pursuing Home Rule, as exemplified, for example, by Charles Stewart Parnell and Michael Davitt, from the late 1880s where the grazier phenomenon emerges and prevails, it foretells how new violences in structure are made possible. Each theme of the 19th century – be it land, social class, gender – retained a unique capacity for the folk memory to recall experiences of outrage related to specific places and events.

Beyond that, in so many aspects of the brutality known to occur in later conflict, these tensions can be identified in form and inclination in an intensified, indeed often escalated and conjoined form, such as in the atrocities of the War of Independence and, in particular, Ireland’s tragic Civil War.

The land is always there as an unresolved issue. Laurence J. Kettle, when publishing The Memoirs of Andrew J. Kettle: Right-Hand Man to Charles S. Parnell in 1958, put on the jacket of that memoir Fintan Lalor’s remark that “the land question contains, and the legislative question does not contain, the material from which victory is manufactured”.

While the usage of land changed, and did so profoundly and with consequences in the 19th century in Ireland, there never could be enough land for all who sought it, then or later. Its fixity in supply would influence both society and its conflicts.

There is nothing uniquely Irish in any of this. Land, of course, is an informing theme in violence in Classical and later European literature, be it contemporary or recalled. Conflict over land is not unique to Ireland. The conflicts and violences associated with it, and within it, are, after all, not only a staple in European literature, but in global myth. Such structural violences in relation to land, however, cannot be understood solely in analyses of disputes as to ownership. The different forms and possibilities of ownership mattered. Modes of living and production were important. What life changes were allowed, limited, or defined within homesteads or patches of land carried their own institutional significance, including familial, and class prescriptions and proscriptions, that could be violent in their imposition.

Today to discuss such themes among those themes they have chosen themselves, we are fortunate to have with us for this Machnamh third seminar distinguished scholars. The principal address will be given by Dr Margaret O’Callaghan (Queen’s University Belfast), and respondents will be Dr Caitríona Clear (NUI Galway), Professor Linda Connolly (NUI Maynooth), Ms Catríona Crowe (Royal Irish Academy), and Dr John Cunningham (NUI Galway).

May I again most sincerely thank Dr John Bowman, historian and broadcaster, for agreeing to chair today’s seminar, having fulfilled such a role for us already by chairing with such excellence our previous two Machnamh seminars in February this year and last December.

Our inaugural seminar, held in December 2020, examined the nature and concept of commemoration itself in the contexts of today and of the national and global events of a century ago. Speakers included Professors Ciarán Benson, Anne Dolan, Michael Laffan and Joep Leerssen, and together we set out our intentions for what we are hoping to achieve from this series.

In February of this year, I hosted a second seminar which focused, inter alia, on Empire, imperial attitudes and responses as they related to circumstances in Ireland. Our reflections included a consideration of the forms and practices of resistance to Empire in Ireland, as well as resistance to nationalism in its different forms and expressions.

The main reflection was given by Professor John Horne, Trinity College Dublin, who provided an overview of the international context of the events in 1920s Ireland, including the fall of empires and the particular status of the British Empire. There were responses from Professor Eunan O’Halpin (Trinity College Dublin), Dr Marie Coleman (Queen’s University Belfast), Professor Alvin Jackson (University of Edinburgh), Dr Niamh Gallagher (St Catharine's College, Cambridge) and myself.

The point in our commemorative programme at which we have now arrived is one where we must confront, acknowledge, and come to terms with difficult aspects of what were the informing elements of context of the independence struggle, including a consideration of the forms and sources of violence that emerged, were given expression, including the gradations of violence that were inflicted on women. Other forms of violence were class-based and deeply embedded. Some forms of violence were carried out more generally and impacted on wider society, such as those that were authoritarian, hostile to pluralism, dominating, or collusive to the impersonal structures of bureaucracy being imposed as a sole and inevitable modernity, the aftershocks of which have been felt up to and including our contemporary Ireland.

I hope you find today’s seminar interesting, thought-provoking, perhaps even a further reminder of the value of transacting history. 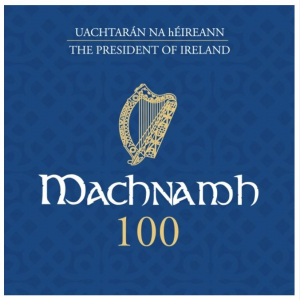