Speech at a ceremony presenting the Defence Force Values Awards

During my time as Uachtarán na hÉireann, and thus as Supreme Commander of the Defence Forces, I am continuously reminded of the high regard in which the men and women of our forces are held.

As President of Ireland and Supreme Commander of the Defence Forces, it gives me great pleasure to welcome you here today to Áras an Uachtaráin. I was very pleased to have been asked by Vice-Admiral Mellett to facilitate tonight’s event, to celebrate the outstanding service given by seven deserving awardees, and in doing so acknowledge the support and encouragement of their families. Indeed, I am so pleased to have the opportunity of acknowledging in general, the support given by the families of so many members of our defence forces – a support that makes the contribution of their partners possible.

This evening is also an opportunity for me to personally honour and acknowledge the integral role that Óglaigh na nÉireann occupies in Irish society. It is something that I have always been aware of.

Our recipients are - Corporal Caitriona Lacey, Navy Engineering Officer Ryan O’ Driscoll, Gunner David Stack, Corporal David McCormack, Private Thomas Carew, Sergeant PJ McCabe and Regimental Sergeant Major John Murray. I salute each and every one of you, and wish to thank you and your families for the sacrifices you have made and for your unwavering dedication to your country.

You have all displayed a magnanimous resolve and steadfast commitment to uphold the central values of the Defence Forces, and your individual efforts and service to Ireland are being highlighted in this ceremony today.

Óglaigh na hÉireann is a defence force, and that word ‘defence’ is important. Its existence is from the founding moment of our state, for the defence of our state. With this emphasis it is different from any other force established for aggressive purpose or for aggrandisement of interests.

Over a hundred years ago, Eoin MacNeill sought three qualities from those who had volunteered to serve in Óglaigh na hÉireann: courage, vigilance and discipline. These are the same attributes that are embodied in the oath taken by those who volunteer to serve in our modern Defence Forces. Members of the Army, Air Corps, and the Naval Service are expected, and indeed are proud to demonstrate these qualities in their daily duties.

During my time as Uachtarán na hÉireann, and thus as Supreme Commander of the Defence Forces, I am continuously reminded of the high regard in which the men and women of our forces are held. This is true of the justifiable pride that Irish citizens have for their Army, Navy and Air Corps and also of the international admiration for the conduct and professionalism of the tens of thousands of men and women who have served on peace keeping missions overseas.

The spirit of camaraderie and solidarity among serving and retired soldiers, sailors and Air Corps personnel is an innate and vital part of the culture of serving in the defence forces. It is something I have witnessed. I have, for example, had the privilege of visiting Brú na bhFiann, the residence for homeless former members of the Defence Forces.

On the occasion I visited, I was moved by the spirit of kindness, compassion and solidarity among the members of the Defence Forces in looking after their comrades and in extending that work into the local community. Your shared experience gives you perhaps a unique empathy and a deep understanding that men and women who have given so much in the service of the state should not have to experience such difficulty.

It is no secret that changes in conditions for serving men and women has brought its own challenges. These are challenges that should be addressed with sensitivity. Those providing such a vital service as those in our Defence Forces must be real partners in interpreting and responding to such changes. Should this not happen, there is a real danger of a gap opening-up between our expressed appreciation of their work and the circumstances we deliver for its practice.

Many are understandably concerned about the ability to attract and retain people of the highest calibre in the defence forces. It is not too much, I would suggest, to expect that serving men and women should have conditions including an income and prospects that are sufficient to provide for themselves and their families. Indeed, as they are the employees of the State, such conditions should be exemplary for other parts of the society and economy. I have heard and read with anxiety of the distress that is being experienced by some of those who are giving their all to serve the State.

There is a duty on us to acknowledge the importance of the contribution of the serving member’s family. While being a member of the Defence Forces is a worthy and dutiful role, it is a perilous one. Our soldiers have died on service overseas and in Ireland, reflecting the real dangers they face in serving their country and their fellow citizens.

Those of us who have become aware of it, are always moved by what is experienced by the partner or family of a loved one working for prolonged periods in dangerous parts of the world, or in perilous situations at home and abroad cannot truly fathom. Recognising the anxiety that this can evoke with their families and friends must be responded to in the quality of our response in terms of living conditions.

Therefore, it is only fair that I bestow an equal amount of praise onto the families of our seven recipients, and I am so happy that they are in a position to share in this happy event.

As President of Ireland and on behalf of the people of Ireland, I express my deepest gratitude for your support and for your willingness to allow your loved ones to face such tangible dangers and to endure lengthy separation understanding, as you do, the importance of their work and the positive impact which they have in this country and beyond our shores.

Of course, the contribution of the Defence Forces to our national community is immense. Members of the Defence Forces have been involved in so many critical tasks at home, such as air and sea rescue, bomb disposal and fishery protection, ensuring the security of our State and the well-being of its citizens.

The international reputation of our Defence Forces, and, by extension, our country, has been greatly enhanced through its performance as UN peacekeepers over the past 60 years, making Ireland one of the longest-serving countries to have done so continuously, since the first contingent of Irish troops was deployed to Lebanon, a country to which I will be making an official visit next month. Over those decades, generations of school children have become familiar with the places in the world where we have been represented with such distinction and where Irish men and women came to the aid of the vulnerable and those at risk: the Congo, Cyprus, Sinai, the Golan Heights, East Timor, Kosovo, Bosnia-Herzegovina, Liberia, Sierra Leone, to name just some of the areas of deployment over that period.

In more recent times, the Naval Service, with the assistance of Army and Air Corps medical personnel, were engaged in missions abroad, particularly carrying out vital work in the Mediterranean, where thousands of lives have been saved.

This humanitarian and peacekeeping work in which you and your colleagues have been engaged is an act of global citizenship and is an expression of solidarity with our fellow human beings on this fragile planet.

While on State and Official visits abroad, I experience very strongly the positive response to the manner in which Óglaigh na hÉireann’s undertakings and accomplishments are appreciated.

The Irish Defence Forces service overseas epitomises the best of our long-standing foreign policies and our unrelenting commitment to multilateral approaches to addressing conflict and persecution worldwide.

Today’s ceremony and the awards you will receive are a fitting and well-deserved tribute to you, a selection of the women and men of our Defence Forces, and as representatives of your colleagues across the services.

Vice-Admiral Mellett was also anxious that in addition to the seven awards being presented to those who have served or who are serving with the Defence Forces, this evening we also make a special presentation to a young man who in his own way has demonstrated those values that are central to the Defence Forces. Charlie Watson, who is only 15 years old, has shown a determination towards pursuing his goal of working overseas and supporting the Defence Forces in their valuable work for vulnerable people at risk in areas of conflict.

Molaim thú Charlie agus fearaim fáilte romhat agus roimh do chlann anocht. Congratulations Charlie and you are so welcome to Áras an Uachtaráin.

I thank you all once again for coming here this evening and for the invaluable contribution you have made in the performance of your duties at home and further afield, a contribution for which I personally am greatly appreciative.

Finally, may I thank all those who have helped to make today such a memorable event, our first-aider friends from the Civil Defence, and all the staff here at the Áras who have all worked so hard to make today a success. 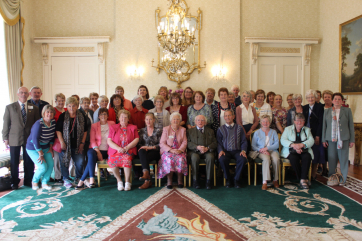 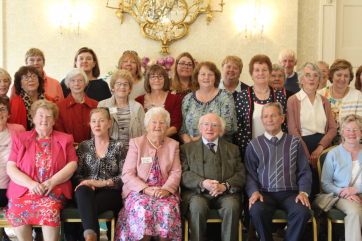 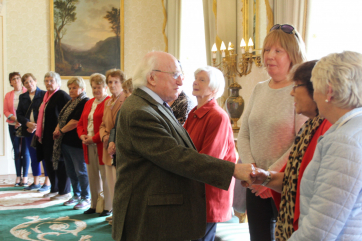 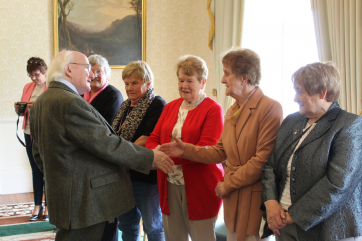 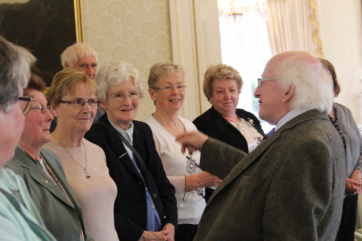 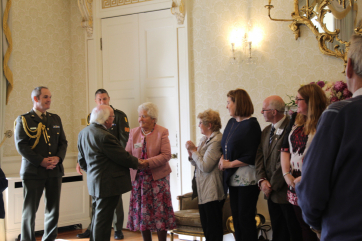 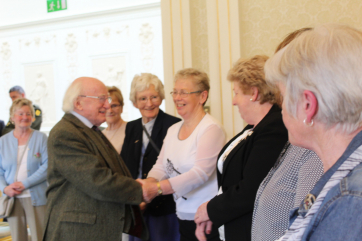 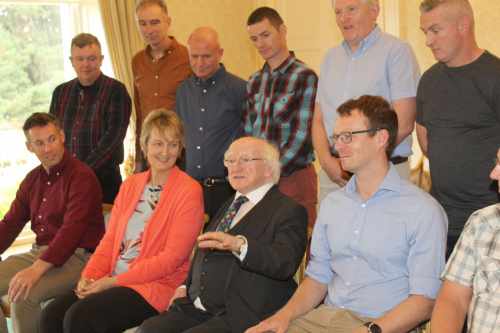